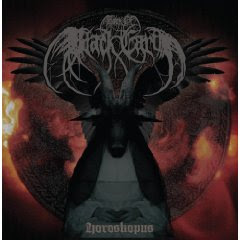 I think that I have a Prosthetic ear. No . . . not some phony flesh colored piece of rubber adhered to the side of my head. I mean, I think I have an ear for the brutal brand of metal that Prosthetic Records puts out. Up to this point, I’ve reviewed Byzantine, Hollow Corp., Skeletonwitch, Century and a handful of other bone crunching bands, and I keep finding the music appealing to no end. So, let’s cue up the latest disc to scorch the finish from my desk and give it a spin. It’s an album from a Seattle quintet called Book of Black Earth, and they’ve presented an album that is a feast for the ears and a hearty knock on the noggin. The album is called Horoskopus. Listen if you dare.
As is the case with most of the material coming from the Prosthetic label, Book of Black Earth is extreme metal with a touch of musical virtuosity. Dense walls of sound build the core of the songs and those walls are constantly chiseled away by swirling guitar and keyboard passages, and metalized riffs to perk up the ears of the most jaded of old school thrasher. Lyrically, Horoskopus deals with organized religions, specifically Christianity, and the inevitable end of days in darkened overtones. Repeated references to the blackening of the sun and the religious right being blatant liars, gives this listener a good idea of where these cats sit come Judgment Day.
From the opening instrumental epic of “2160,” you can easily get the sense that something big and important is about to go “Ka-Thud” in our laps. Guitars grind away at a nice mid tempo pace while the high hat crashes in time. The entire tune patiently builds up itself, drum upon drum, riff upon riff, until the last sustained notes burst into “Death of the Sun.” That aforementioned wall of sound practically blots out the sun on its own, but ultimately, guitars break though the din with classic old school speed metal riffs. There’s just enough mid tone to those guitars to shed a ray of light, no matter how thin it is, to the darkened bombast of the rest of the instruments. Note the riff towards the end of the tune as the sustained guitars return to build that much needed tension before bursting into a classic head bobbin’ groove. Dynamics, baby! 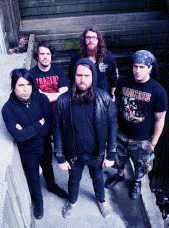 Speaking of dynamics, "Horoskripture" features a great deal of texture and mood to the all out brutality of the rhythm section. Ambient keyboards hover in the background as the guitars crush coal into diamond. The vocals, in typical death metal fashion, spit venom at the religious right, all while the band lay down punishment upon punishment. The howls of torment around the 3:00 mark convey that something special necessary to convince me that these guys mean what they say. But, more importantly, the band takes this crazy left hand turn with less than a minute in the song. The keyboards reappear, taking a more predominant role, creating an eerie Middle Eastern vibe, and then the guitars slide back into the mix and lay down a phenomenal groove riff that will undoubtedly get a crowd moving in a counter clockwise direction. Great power to this tune!
Book of Black Earth simply master the art of heaviness with “Cult of Dagon.” This tune is downright creepy, what with its clean toned guitars and ambient textures cutting through the plodding dirge. Agonized vocals pour from mouth of guitarist/vocalist TJ Cowgill, as he belts out the empowering lines of, “There is no God like the will of my own.” Take what you’d like from it. Personally, I think it’s some pretty powerful shit. Eventually, the tune picks up the tempo and the intensity as everything kind of just opens up. More space for the individual instruments to breath, more dynamic performances from the musicians. “Cult of Dagon” is as epic as metal gets.
Mixing sheer brutal riffage with melodic passages of guitar work, “Funeral of Peace” shows more of that dynamic songwriting that Book of Black Earth do so damn well. “The Darkest Age” is a double bass drum, riff heavy frenzy that shows that oh-so-perfect touch of technical know-how to add key points of interest. Musically speaking, “From Heaven” gets damn near melodic as the lyrics draw comparisons to the church’s worship of Christ to the ancient Egyptian worship of the sun. “The Great Year” continues with that lyrical concept and just runs with it. These concepts are nothing new for anyone who’s studied world religions with an open mind, but imagine thrusting these beliefs in the face of a Christian gathering. These lads would be drawn and quartered, tarred and feathered, and burned at the stake . . . all at the same time.
Unrelenting, unapologetic, unabashed, and unfettered, Book of Black Earth practically hand deliver one of the most impressive extreme metal albums to bludgeon my ears. Again, hat’s off to Prosthetic Records for finding yet another multi faceted extreme metal band. Book of Black Earth are outrageously heavy, extremely intelligent, technically gifted, and have the uncanny ability to use the right amount of melody to create a wondrous palette of sound. Horoskopus is the bands second full length album (first with Prosthetic,) which intrigues the hell out of me. What does the future hold for these guys? Yeah, I know . . . only time will tell. But damn! What a way to kick things off! Fortunately, I don’t have a plastic appendage hanging from the side of my head, and I can truly enjoy this album with the ears that I’ve been given.