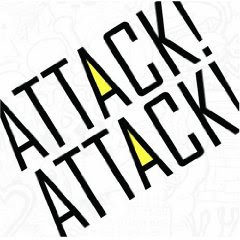 Back when I was DJ at KSPC FM, I always loved it when a band came along and found a way to breathe new life into a genre that had grown moribund and stale. In some ways Husker Du did this with punk. Jesus and the Mary Chain did it with post-punk doom and gloom. The Cult did it for psychedelic hard rock and now we have Attack! Attack! UK, forcing the corpse of pop/punk to suddenly convulse and draw a fresh breath.

Hailing from Wales, Attack! Attack! UK bring a fresh dose of enthusiasm, a lorry load of hooks and an entire factory's worth of Red Bull to the pop/punk world, keeping a keen eye towards the past and avoiding all the annoying contrivances of emo. In short, this is a rapid fire attack of punchy, high-NRG rock, just begging to take the world by storm. And judging by their touring schedule and concert mates they're playing with, it seems the boys are already well on the way to doing just that.

"Honesty," is a pounding blast of pure punky rock and roll energy, coming at you with all the ferocity of a speeding train. After a Green Day-esque stuttering opening riff, the song really takes off with the chorus which reaches some speed velocity yet to be clocked by mankind. The vocals are strong, devoid of the emo nasal whine, sailing over the pounding drums. This song is a pure punk pop rave up. I can already see the boys blasting through this tune, high on the stage, running around like raving hyenas with the crowd bouncing in a frenzy below. That's about as catchy and hooky as punk pop can get. 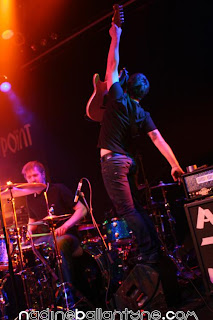 "You and Me," reveals another side of the band, with strong technical playing, unusual guitar tones emanating through the opening riff and a dead-on perfect, near reggae bass line. I don't know which song was actually written first, but damn, if this doesn't seem to be the work of a slightly more mature band. Just check out that downright beautifully sung vocal bridge before the chorus, which again shoots off the disc amongst it's own jet-fueled rage of youthful energy. These guys are so good, they can even make an old codger like me feel young enough to jump up and start pogoing on my desk, and believe me I haven't pogoed in a while. Ouch, wait a minute, Pope, call the chiropractor!

Ok, I'm back. My spine's been adjusted and I'm ready to rock with Attack! Attack! UK again. And just in time, because no matter how many discs I've just dislocated, I wouldn't want to miss "This is a Test." Beginning with a down right sludgy bass, this song explodes again in another frenetic burst of punchy energy, loaded with more hooks than you'd ever find in a coat hangar factory. Alternating gang vocals with the vocal verse lends a punch to the proceedings like a one-two combination to the gut, just getting my liver and kidney in motion with the raging rock. Another pure energy rocker. I can't imagine how the guys ever manage to play a whole set of this live. Three songs in and I'm already sweating like a pig!

But one thing that makes Attack! Attack! UK stand high, head and dislocating shoulders above the other punk pop bands out there isn't just their energy (that can be manufactured) it's their chops (which is pure talent.) Just listen to a track like "Say it to Me," with the angular, slashing guitar work, reminiscent of early Gang of Four and you can see the crew knows how to look past Blink 182 to find the true origins of punk pop rock energy. The boys also know how to fuse elements of britrock like Razorlight or Lost Prophets into their mix, breaking up the tone and timing of their riffs, adding flourishes of chiming guitars to fill out their sound. "From Now On," rings with big guitars a la The Verve. "Lights Out," follows suit, dropping the pace down just enough to dig right into the stuttering riff. Then, like always, the chorus just takes off. Damn, these guys know how to hook you with their choruses, it's like they inherited the "write a good chorus," gene from some unknown pop masters before them and just ramrodded it with their own high energy. 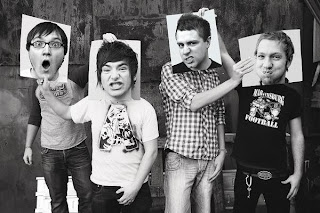 "Home Again," one of my favorite tracks on the disc, demonstrates all this perfectly, playing like a lost Gang of Four track, amped up on Red Bull and played back at twice it's recorded speed. An absolutely infectious track. Then, not to be outdone, the boys save their absolute piece de resistance, their punk epic, "Time is Up," for the last track on the album. Every up and coming band needs to study this song. Record it, paste it up on a chalk board, dissect it, because this is how you write a song that brims with energy, boils with passion, rages with speed, yet still finds room for dynamics, speed changes, dropped out guitars and another chorus that is guaranteed to drill straight into your frontal lobe like a hydrolic drill bit. All in two minutes and fifty seconds. There's no other way to put it, from the obtuse guitar stuttering to the monstrous big riffs, this song is a flash of pure punk pop perfection.

So, what do you think? Get the idea that I like this disc? Hell yeah, and to make that even more impressive, how's this little tidbit for ya. . . I can't stand emo. I say that only to illustrate how far away these guys are from what you might imagine pop punk to be. This is a blast of pure adrenaline, punked up and rocked up, with a suitable nod towards the post-punk monsters of the past and a massive head start on any pop punk bands of the present. This is just freaking good rock and roll. The energized kick in the ass that the whole pop punk genre was in desperate need of. And that's what Attack! Attack! UK do, they attack their music with abandon, with the raging intensity of a kamikaze pilot, blasting apart the stale genre in a massive explosion of hooks and melodies.

Now, Pope, get that chiropractor over here again. I think my lumbar just collided with my thoracic somewhere in my pelvis. And don't even ask me about my cervical. I think it's over there somewhere by the door. Oh what the fuck, just play the album again. Death by pogo never sounded so good.