Amy MacDonald - This is the Life 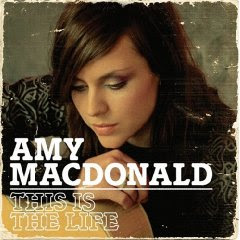 It isn't very often that I'm totally surprised by an artist.

It wasn't that long ago, after spending a day strolling around San Francisco with Mrs. Racer, that I popped Amy MacDonald's debut CD, This is the Life, into the player for our drive home. Knowing the Mrs., as well as I do, I figured she'd appreciate what I anticipated to be a nice slice of singer/songwriter Celtic folk-rock. And to that end, I choose well. Within moments of the track's opener, "Mr. Rock and Roll," Amy received the Mrs. Racer finger-tapping-in-time-to-the-strumming-guitar stamp of approval. Immediately, I agreed, this was beautiful, yet moving and energetic, sweeping, deeply Celtic rock, instantly engaging and involving, tripping to my ears like a female Luka Bloom.

Within moments of "Mr Rock and Roll" starting, you can't help but be sucked in by Amy's deep, Celtic-styled brogue of a singing voice, rich and textured, it's a fascinating instrument. A deep mournful voice, full of road dust and life-weariness, yet still piqued with the edge of hope and passion. It's a voice that has seen kingdoms rise and fall. Lives lived and passed. Pain and suffering, yet can still break at the signs of love in young lovers eyes.

It is a voice that demands to be heard. An ageless, timeless, narrator of tales past and future.

Then came the surprise. Amy MacDonald is only 19 years old. 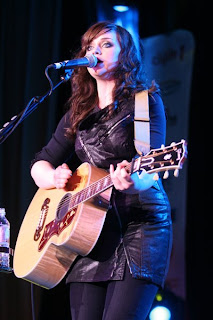 Born in Glasgow, Amy took the stage at the tender age of 15, won all sorts of acclaim and has now released her debut album that has already sold over 1 million copies world-wide. She's a mini-sensation in the U.K., having appeared in all the major festivals like Glastonbury, and her star is still on the rise. And one thing Amy is not, is a novelty act. This isn't a British Hannah Montana. There are no Jonas Brothers in her backing band. No, Amy is some timeless creature, sent from some mystical wandering minstrel dimension. She's an amazingly old soul, now taking residence in a young woman's body, inhabiting a voice years and years beyond her age.

Every once in awhile a young woman like this appears. Joss Stone blew the soul world away with her 17 year-old going on 30 singing, and to some extent, Duffy is doing the same thing over in Wales. But neither of these talented singers can match what Amy MacDonald has put together, for it's not just the voice, but the way that voice brings to life her extremely mature songwriting, tales of a timeless, yet troubled place.

Listening to Amy is like stepping back into the Scottish or Irish countryside, a deep, bone-penetrating mist hanging in the air, as you step through the door into the warmth of an ancient stone pub. A fire crackles in the corner, the wooden posts of the crumbling construction stained dark from the decades of cigarette smoke. Patrons fill every square inch, taking refuge from the weather and sharing in the camaraderie of an ale, some conversation, and the music. Of course the music. Taking centerstage, there's Amy, a folk singer passionately belting out weary tales, a touch of melancholy in her songs, dripping in her voice. Her songs are strong and passionate, like the people, yet weathered. Her songs are strong in spirit and soul, yet hiding a hint of fragility.

"Mr Rock and Roll," starts with a delicately strummed acoustic guitar, keyboards picking out notes beneath, before the chiming guitar picks up the pace, the drums and bass hopping on board. Then comes Amy's voice, deep and full throated, brimming with a sadness and hidden pain as she brings on her observations of the world around her. "Mrs Black and white she's never seen a shade of grey/Always something on her mind, every single day/But now she's lost her way/and where does she go from here." 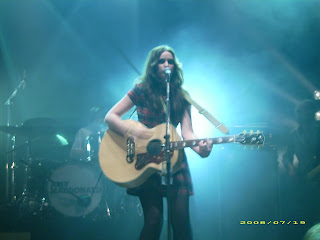 "This is the Life," flows next, my favorite track on the album, featuring a vocal performance that can literally bring chills to my spine, goosebumps to my arms. Piano laces the track underneath the bouncing bass, and there's Amy, strumming away on her guitar like a lost troubadour, bringing on her tales of a lost youth. Poignancy reins in her voice as she sings, "Where are you gonna sleep tonight."

"Poison Prince," is a pub-rock, Celtic-folk blow-up, certain to have the patrons lowering their glasses of Guinness, clapping their hands, stomping their feet and singing along to the chorus. Another timeless song, this could be an ancient bar song or a modern revelation, it's so hard to tell.

"Youth of Today," is Amy's generational act of rebellion. Sung completely devoid of the spit and venom of the spoiled brat emo kids, Amy's voice is defiant, yet vulnerable. Weary beyond definition. It's the voice of someone who's seen too many dreams fall, and knows that hers may dissolve as well, but that won't stop her from trying. The world today may not be as nice a place as it was during her parents generation, but its all she has. It's her world, her dream. It's almost a voice of finality, of resignation, yet indignant to any who try to alter her path.

And after all that, we're only four tracks in. Needless to say, the album goes on from there, growing in scope and passion. Delving deeper into reflection and isolation. Listen to the mournful horn in "Let's Start a Band," the subtle groove of "L.A." the elegantly strummed acoustic in "A Wish for Something More,"the mourning majesty of "Footballer's Wife," or the nostalgic optimism of "The Road to Home." And through it all, there's Amy's remarkable voice, rousing her fellow pub dwellers to revelry or sadness.

And she can do that. She has that power. With a simple inflection, she can light up the room to bawdy heights or drop it down into the depths of melancholy.

Buy here: This Is The Life