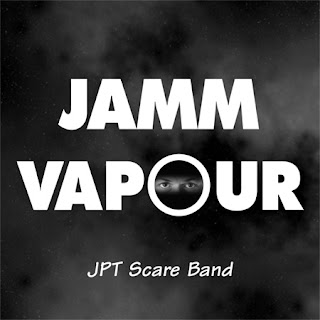 I'm sorry, but a band who hadn't recorded together in decades and even then, by their own admission were "so very damned obscure," shouldn't be able to get back together, plug in, light some incense in their basement studio and knock out an album this freaking brilliant.

But then JPT Scare Band never did anything by the rule book.

Back in their day, the early seventies, The JPT Scare Band was an awesome purveyor of absolutely freaked out acid-drenched blues jam rock. Led by the maniac guitar playing of Terry Swope, an unrecognized genius of feedback ignited, blues rock trip-outs, and the stellar rhythm section of Jeff Littrell pounding the skins and Paul Grigsby losing half his cerebellum on bass, the boys put out some "painfully obscure," platters of steaming, freaked out acid trips. Often mislabeled as proto-metal, the guys were actually a throw back to the free form, let the music go wherever the bong water bubbles, psychedelic sixties with a hard-core blues background and a serious rock and roll heart. After releasing the excellent Past is Prologue compilation which culled some old classics with some newer tracks, the guys got motivated to dust off their guitars, amps, wrapping papers, and lava lamps and out poured Jamm Vapour.

And damn, it shouldn't be this good.

But it is. Jamm Vapour is an extended acid blues-rock freakout defying description. "Amazons," sets this platter alight, a nine-minute explosion of dripping feedback drenched guitar licks, flying bass lines and drums pounding away faster than a human could swallow a load of mushrooms. It is a timeless track, recorded in the 1970-2007 hallucinogenic zone. As an opening it's a stunner, immediately pounding the message home that the boys hadn't lost any of their edge or fearlessness over the last 30 years, or fried away any necessary neural synapses. 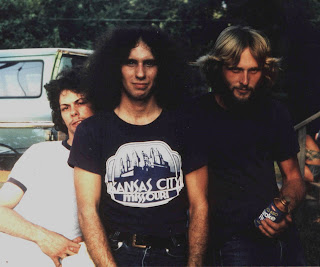 The next track "Ramona," hints at the bands early British Invasion roots, lifting a bass line from the Beatles and harkening back to some vaguely Lennon-esque melodies, if Lennon had taken a whole different crop of funny little pills.

Another amazing thing about this disc, is that it was recorded live in the boys basement, no overdubs or studio trickery, just feed directly into Yamaha AW-4416 workstation. Think about that as the extended time warping jam that is " Right Mind," blast through your stereo, Terry's voice sounding particularly fine and his guitar scorching a trail from earth to some hallucinogenic planet near Alpha Centuri. No one lays down seriously demented psych-blues jams like these guys. Then or now.

"Don't Count me Out," a blues-addled ode to psychedelic madness ("I've got a monkey living in my head, sometimes I think he wants me dead,") is as dense and heavy as any stoner rock that's come around in the 35 years since JPT launched their first album on the world. Stunning guitar work, a relentless beat, a bass line that bounces across the atmosphere and back down to earth, all ramming against Terry's promise that madness won't get the best of his white matter. A searing, disturbing platter of acid rock. 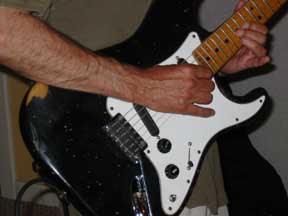 Then comes "Gelo Jam," to which I can only say, "What the hell?" Dropping back to their roots, the boys decided to drop into a riotous 11 minute freeform jam, a wild ride of stuttering guitars and freaked out bass. Terry Swopes making up the vocals on the spot on this one-off, spontaneous recording. Contrast that to the millions of dollars spent by producers like Timbaland, trying to craft something blah into a pop song and the stunning power of JPT becomes all too clear. These guys are musicians musicians, three guys who love playing and love playing together. They just get into a groove, a steady, freaky space and hold that intention, moving time and space through their amps. This is where the album title came from. A full-out acid-drenched jam, allowed to go where ever the vapors flowed.

And the best thing of all, is that the boys are still at it. Check out their website at www.jptscareband.com and check out for yourself the madness these guys bring forth. Or best of all, just buy their CD's and see what all the fuss is about. Fans of amazing psych-blues jams will not want to miss this.