I wish it was autumn.

That's the first thing I thought of as the new Shuteye Unison self-titled debut spun around in the Ripple CD player, it's gentle tones sparkling through the speakers. I wish it was autumn.

It's hard to explain, but something about the music, the dreamy, shimmering indie pop of Shuteye Unison just makes me think of brisk autumn days, a cool breeze lilting through the trees, rustling the leaves, stirring them to revel in their glorious tones of red, orange and gold. A simple melancholy floating through the air heralding the coming of the darker winter nights. The glistening of the first morning dew on the front lawn, a harbinger of the arrival of the imminent frost.

Now, it certainly doesn't hurt that autumn is my favorite season. There's just something about nature in autumn as it prepares to sleep. The simple joys of reaching for my favorite sweater, the heat of the summer finally past. The chill in the air makes me introspective, a time for solitary walking, crunching the fallen leaves under my hiking shoes, the flip-flops and sandals safely packed away for the season. It's a time for taking stock of my life, for recharging my energies. Time to start a meditative journey.

I never had the pleasure of hearing The Rum Diary, but when they went on hiatus, three of the members (Daniel McKenzie, Jon Fee and Jake Krohn) began to write and record together. Their muse inspired, Shuteye Unison was born. Self-recorded and mixed with Pall Jenkins (The Black Heart Procession, Three Mile Pilot)l, the band displays a wealth of texture and restraint. This is dreamy, glistening alt-pop, instantly accessible, shimmering in its tone and downright beautiful in its scope. An ambient, post-punk dreamscape of textures, looping bassline and sparkling guitars. It is an album of patience and quiet, of mood and intent, spiked with enough muscle to propel the songs through to the end. It is an album of infinite complexity and sublime simplicity. Starkly somber in tone, yet ultimately uplifting. Grand, yet intimate. It is contradictions within itself, yet as clear as a newborn autumn morning. 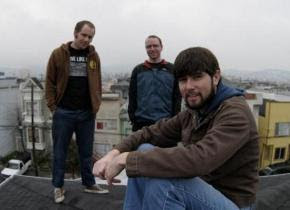 To my ear, Shuteye Unison recall some of the best hypnotic alt-pop of days gone by. The floating dreaminess of the Cocteau Twins. The vocal tone and melodies of my personal favorites The Lotus Eaters. Shades of David Sylvian. Hints of Autolux. The ambiance of the more introspective 4AD label. The album is dense, but not suffocating, a streak of light shimmering off a still pool.

Beginning with the ambient intro "Crf030608," it doesn't take long for the vision of this band to be revealed. "Tomorrow's Five Horizons," rides on a melodic bass line, a throbbing drum sequence right into the soaring guitars. The song is one seamlessly lush hook. An effortless atmospheric journey through passages of soaring beauty and lulling quiet. A warning of a future ecologic apocalypse told with a rapturous chorus and delicate harmonies. It is a stunning work of subtle beauty.

"Fields Landing," follows, a mournful, almost pre-war feeling, with the drums marching out a beat similar to a weary army trudging reluctantly through a muddy field. The melancholy synthesized tone, near bagpipe like in quality, add to this feeling, a Scottish Loch, a misty, green hill of grass. But this isn't a war song, it's a journey, a search for sanctuary. And finally, when the guitar crashes in with vigor, the song launches into its own time and place. Throughout the song, as the entire album, the hushed vocals are an instrument, adding a delicate touch of fragility, a tone, a hint, rather than a focus. The overall effect is striking.

"Latin Metrics," rides a stuttering drum beat through the shimmering guitar, creating wave after wave of hypnotizing post-rock. The drumming on "Slow Ravens," sucks me in like a kid looking down a well, dreaming and imaging what strange universes dwell inside. Moments of fury strike through the chiming guitar tones, chords of aggression, driving this song more urgently than those that came before. This is probably my favorite track, if I was forced to pick one, but in truth, the six tracks here, including the final nine-minute opus, "Through the Dunes," all act together as one unified whole, a transportation into a lush, atmospheric world. A warping of dimensions to the ambient, tuneful place that is Shuteye Unison.

I've heard that the group is already at work writing and recording their next album for the Park and Records label, an eco-friendly music venture based outside of San Francisco. If the six songs on this extended EP are any inclination of the majestic beauty that is still to come, I'll be there. Wood crackling in the fireplace, my window open to allow in the chill of the autumn night, my stereo turned up loud for the music to engulf me, and as the boys suggest, a Guiness in my hand.

Shuteye Unison doesn't have a video yet, but these performances by Rum Diary can give you just a slight hint at the sounds and tones that await you.

Never heard of these guys, but the review is quite interesting...might have to check into this.