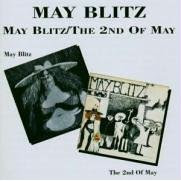 One of the things I like best about exploring this endless vein of gold that is proto-metal, is never knowing exactly what I'm going to find next. As I wrote before, the proto-metal period (roughly 1969 - 1973) was a time of dissolution of all the rules. The ecstatic feyness of the psychedelic '60's giving way to the bitter dissapointments and despondency of the Vietnam/heroin '70's. Rules fell apart, genre's collapsed. In fact one of the most beautiful things about this time period is that bands we now call proto-metal, actually share very little in common in terms of sound, other than a desire to be heavy. Believe me, Bang sounds nothing like High Tide, who have very little in common with the JPT Scare Band.

And then there's May Blitz.

Another out-in-left field obscurity from this period, May Blitz, on paper are actually the band that shoulda been. Signed to the Vertigo label, an awesome purveyor of early heavy music, after the success of that label's releases of Black Sabbath and Juicy Lucy. Inspired by the heavy vibe they were discovering, Vertigo went out in a hurry and signed future legends Uriah Heap in 1970 and then rushed to bring on their next heavy act, May Blitz, certain that they'd found another winner. With James Black on guitar and vocals, Reid Hudson on bass, the three-piece was led by Tony Newman on drums, fresh after his stint replacing Aynsley Dunbar in the Jeff Beck Group where he played on the classic Beck-Ola album. 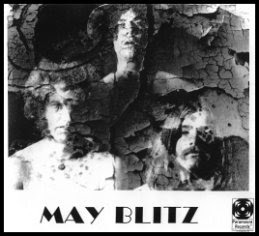 Despite this hefty pedigree, May Blitz's success would never come, producing an entire recorded output of 2 albums, both brought together here in this combination CD. But what a freaked-out blitz of psychedelic proto-heaviness it is.

The entire vibe of this band can be summed up by the title of their stoned-out 8 minute 20 second opener, " Smoking the Day Away." This is massively, smoked-up and THC-d out stoner vibe, doomed-down psychedelic blues. Leading off with a haunting, foreboding guitar line, Newman's drums percolate underneath, rising to the top like bubbles rising in the bong water. James Black was a talented guitar player, heavy into the Clapton blues vibe, with a voice vaguely reminiscent of the Slowhand man as well. Think Cream here, but slowed down and stoned to the point of near catatonia and fused with the darkness of a bad night on acid. Slightly buried in the mix, Newman's drumming is nothing short of remarkable. This is slow, smoldering number, heavy in its feel, but not it's drama. Dig the midway breakdown and redirection into another riff. Nicely done. Cool and smooth. Now, pass the roach please.

"I Don't Know," is a laid-back slab of hashish blues rock, with a nice bass breakdown leading into a blinding fuzzed out blues lead. Great middle section with the guitar, bass and excellent jazz-inflected drumming all exploring their own individual corners of drug nirvana, before bringing it all back together in time to gel before the tape runs out. "Dreaming," a slower psychedelic number lays on a heavy vibe, making you realize that the dreams we're talking about here are definitely some acid infected bad trip before "Squeet," brings on the heavy rock funk, tipping over a descending bass line, some scat guitar and the rolling thunder of Newman banging on his skins. Perhaps Black's best vocal performance even if I have absolutely no idea what he's singing about when he bellows, "Squeet all over the walls." Sounds like a job for the maid to me, or a new batch of drugs from the corner pusher. But still, dig that great bass breakdown, laying it on under Black's extremely jazzy solo as it mutates into a full-on psych/blues freakout.

And it goes on for the full seven tracks that make up the first disc. Slow burning slabs of stoned out blues-psych rock, heavy in its execution. Don't expect full on near metal like Sir Lord Baltimore, (except for the straight-out grinding proto-metal of "Fire Queen,") but a more laid back, yet still darkly heavy vibe.

For the second album, originally enough titled The Second of May, the guys tried to bring on a slightly more commercial sound. And to that extent, they succeeded. The lead track, "For Mad Men Only," pounds at you with more fury than anything on the debut. Led by a terror of a lead guitar riff, this is more what you'd expect of true proto-metal; mean, aggressive and shoved right down your throat. "8 Mad Grim Nits," keeps this heavier vibe going through an extended, moderately bizarre instrumental acid-fueled jam. Midway through "Snakes and Ladders," the song morphs into something frightening, massively distorted detuned sludgy metal riffs with ghostly vocals. Otherwise, the album alternates between a slightly more pop feeling psych vibe with great harmony vocals and a darker, trippier sound, like the "Hair," soundtrack filtered through a sliced up Marshall amp and on some nasty downers. I swear "In Part," can only be described as the first ever appearance of rap-metal.

Critical reaction to the second album was nearly absent, no doubt hampered by some seriously ugly album art, and the band broke up, Newman going on to play with Paul and Adrian Gurvitz in the Three Man Army then drumming in studio and on tour with Marc Bolan, David Bowie, Mick Ronson, Chris Spedding and even David Coverdale's Whitesnake. May Blitz became a footnote in his resume. A lost forgotten, near-success.

Ah, but not with the Ripple Effect around. Cause we're here to tell you that if you can wrap your ears around a totally spaced out, lethargically aggressive attack of sheer acid-drenched blues, coated in the armor of that early anything-goes-and-everything's-thrown-in experimentation of the proto-metal vibe, we've got another little, slightly bizarre treasure for you. It's hard to call May Blitz originators, but believe me, they explored a muse that was entirely their own. An absolute oddity, yet a treasure all the same.

Posted by The Ripple Effect at 1:06 AM

nice post, never heard of them, will try to track down; at the moment i am awaiting delivery of 2 Family albums, a band i have actually never heard but recomended by a friend......my latest heavy psych album is blossom toes, pretty good

Thanks, Paul. Hope you like the Family albums. They were near legendary in England, but never made a name in the U.S. Instead, they're best known as John Wetton and Rick Grech's first band's before they went on to King Crimson and Blind Faith.

Now, I've got the Blossom Toes, but haven't hear it yet. Let us know how that is.

Smoke the Day Away - I may have to steal that song title.