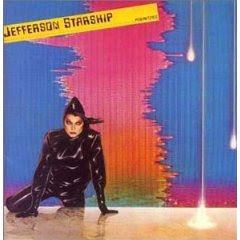 Somewhere between the hangover induced by soft AOR radio hits like their own “Miracles,” and mind numbing pop like “We Build this City,” Jefferson Starship found themselves at a strange place.

They had the sound and fury of a real live rock and roll band.

Grace Slick and Papa John Creech gone, they had stumbled upon the sound on their previous album, Freedom At Point Zero, perhaps almost by accident, on one of Pete Sears’ songs. And Freedom is annoyingly schizophrenic, alternating between power chord rock like “Jane” and saccharine laden group sing-a-longs like “Lightning Rose.” The band had to make a choice, which direction they wanted to go. For once, they made the right decision and went with the power chords.

The result, with its garish new wave cover, is the heaviest thing that the Starship ever put down on vinyl. Producer Ron Nevison had a touch for clean metal, one that he would perfect later on with Heart and Ozzy Ozbourne, and the psychedelic overtones play well with the ferocious guitar playing by Craig Chaquico. Nevison gets the credit/blame for making rock slick, safe and sterile in the 1980’s, but here his production skills give us an immaculately recorded CD that has a band whose energy probably derived as much from the different songwriters as the internal group tension.

“Find Your Way Back,” a minor hit in 1981, has aged well, perhaps better than much of the stadium rock that was hitting the charts in that year. Mickey Thomas’ vocals may not be the favorite of everyone, but they take the place of yet another instrument in the same register as Craig’s guitar. With the same progression as Foreigner’s “Hot Blooded,” "Find" is infinitely more interesting, lyrically and sonically.

The entire album is held in place well by the solid playing of transplanted Englishman Anysley Dunbar, who had also played with Journey on one of their best albums. His thunderous backbeat lead us into “Stranger,” machine gun rolls into the fast-paced “Modern Times,” carry “Mary,” past its power chords, ground the lyrically challenged “Save Your Love.”

And as “Save Your Love,” closes out the first side, Mickey Thomas sells Jeannette Sears’ lyrics with more authority than most people would give him credit for, and Craig Chaquico brings the song home with an extended solo that gives credit his “guitar Wunderkind” label that he used to carry in the Bay Area. It’s a delicious side closer in the era of vinyl. As the song fades out, you’re almost exhausted by the solo, furious notes swirling from a Leslie cabinet in the mix, the rest of the band in full flight, from acoustic guitar to keyboards, to vocals that enter from somewhere else.

Paul Kantner, the Airplane/Starship mainstay contributes three of the most adventurous songs on the disc, “Wild Eyes,” “Modern Times,” and “Stairway to ” itself perhaps the most humorous thing that the group ever wrote. While the music proclaims, “your manager is an asshole,” careful perusal of the lyric sheet shows that the group notes it in print as “Your manager is a very nice person.” “Modern Times,” has a great arrangement, jumping parts and building the tension to the final chorus, “Don’t want nobody to control me.”

“Alien,” which sound appropriately sinister and interesting in 1981, today sounds a bit cheesy, all throbbing bass, keyboards and spaceship sounds in the intro, but there are tempo shifts that a beginning band could not attempt, let alone pull off, that make it more than a toss-off song.

An oddity in this world of readily available music, the vinyl and CD have been out of print for years, and with much effort, I finally found the disc available only in Japan on Ebay. It is, however, worth the price, as the sonic transfer is sharp, clear and gorgeous. On headphones I can pick out distinct guitar and keyboard parts that were submerged on the original vinyl. You may have to do a little digging to unearth this little gem, a true under-rated classic.

Posted by The Ripple Effect at 1:20 AM