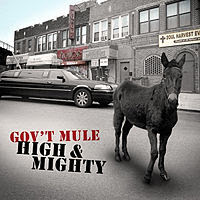 When I first heard the advance tracks for High & Mighty way back . . . when the hell was that? 2006? Crap . . . time flies. Anywho’s, when I heard those tracks, I thought, “Gov’t Mule has just delivered us from the dark ages of music.” Think back a couple of years and try to remember the music of 2006. The industry was screaming for a hundred cc’s of something new to kick start its heart. Now, I’m not going to be as bold as to say that High & Mighty is the best rock album of all time. Hell, it’s not even the best Gov’t Mule album. So, why write a review for this one before the first album, Dose, or Life Before Insanity? Quite frankly, High & Mighty came out of nowhere and knocked me on my keester when I needed to get knocked around the most.

Always ones to bring insight to their bar room brawlin’ brand of rock n’ roll, Gov’t Mule take it up a notch with some venomous lyrics aimed at the rich and powerful, impassioned lyrics of strength and love, and head shaking lyrics about the mind set of society. In other words, Gov’t Mule give their listeners food for thought to go with the stellar musicianship that comes from a life time of livin’ the dream.
The opening few minutes of the lead track let you know that the Mule is indeed back and quite possibly better than ever before. I mean no disrespect to the late Allen Woody by that comment. The first three Mule albums are classics and his work will never be forgotten. But, this is a new era for Gov’t Mule and the additions of bassist Andy Hess and keyboardist Danny Louis have melded with the stable personas of Warren Haynes and Matt Abts to create a sound that will continue to grow for years to come. “Mr. High & Mighty” has all of the classic qualities that a rock song needs. Great guitar work, solid drumming, vocals that melt polar ice caps, lyrics that are immediate and thought provoking. This is what we started listening to rock n’ roll for, my friends! Check out Warren’s solo. That tone don’t come from no box . . . that’s pure Warren Haynes. Dare I say, what legends are made of? For you old school rockers who have never stopped spinning you’re AC/DC collection, give this tune a spin and see that’s there’s a whole new world awaiting you.

Just as “Mr. High & Mighty” fades out, “Brand New Angel” opens with Haynes hammering away at a muted riff and I can just about hear Will Farrell hollering out for more cow bell. Note Haynes’ licks throughout the verses. Great bluesy fills! And that riff as the band drops into the guitar solo is an awe inspiring ditty. But, this songs greatest contribution to the arts is Danny Louis’ keyboard solo. The first time the Skip (Delta Mud Skipper) and I heard this tune, we thought, ‘Damn. That’s an odd tone for a guitar.’ A few seconds later we realized that it was the keyboards creating that beautiful wash of sound. Absolutely amazing tune! 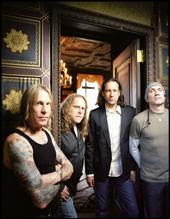 High & Mighty has so many great tunes on it, I could probably ramble on for hours and point out every little nuance, but that would take some of the fun out of it for you. However, there are a few other tunes that I just need to tell you about. “So Weak, So Strong” highlights that Warren Haynes croon that has become part of his fingerprint. The intro alone is enough to buy this album. As the keyboards kick in, there’s this mellow Zeppelin vibe that comes out, and shows just one more reason why the recent additions of Hess and Louis opened a billion doors for the Mules musical explorations. It probably doesn’t need to be said, but there’s another stunner of a guitar solo on this one.
“Child of the Earth” is a tear jerker. The wail of the opening guitar notes, followed by Haynes’ rich molasses and bourbon vocals, absolutely melts me. Damn. Racer! Pass me a shot of something. Anything . . . just get me something! As mournful as the tune is, it has an undertone of hopefulness that’s inspiring. Here’s a shocker . . . Warren’s laying down a guitar solo for the ages. “Like Flies” is an agro riff monger with an industrial (?) slant. Distorted vocals and a primal drum beat push the boundaries of this tune. Hess’ stuttering bass approach is pure genius. You can’t keep your head from bobbing to the groove, especially at the breakdown as Warren blasts us with a bit of slide guitar. “Million Miles Away” is a gospel soaked ballady-type piece. Louis’ piano shines as the background singers howl away. Hess and Abts keep the song steady as the surrounding textures explode around the structure of the song.
Really. Somebody tell me why High & Mighty wasn’t received with open arms by a clamoring mass of rock hungry music fans. I know the Skip and I have told people about this album, but for some reason, those words have fallen on deaf ears. Every song has something new to offer. Old school flavors with a new school approach. Maybe it’s too intelligent for the masses. No . . . that can’t be it. Oh, I get it. The band members aren’t hot little sexy numbers that will have the masses tuned to Mtv for hours at a time. No, wait . . . that can’t be it. Mtv stopped playing music years ago. Alright, let me put it to you this way . . . if you like Led Zeppelin, AC/DC, Allman Brother (Hey, Warren was/is a member,) then you’ll like Gov’t Mule. They’re simply a natural progression of the great music that filled the airwaves in the late ‘60’s and ‘70’s. The music features complex arrangements to standard blues rock, super human musicianship, soul. It’s heartfelt music that rock’s your nuts off one minute and soothes your pain the next. Seriously, watch the videos for “Mr. High & Mighty” and “Brand New Angel,” and see for yourselves why Gov’t Mule is one of the most underrated bands of all time.
-- Pope JTE

Posted by The Ripple Effect at 1:11 AM

Nice. Warren Haynes doesn't get enough credit. He's one of those guys who's crafty like a cat, both in his playing, writing, arranging. Nice review.

Couldn't agree more Ray. Thanks for the comments and keep up the great work on your blog.