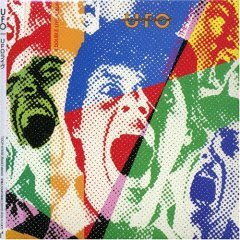 From the very first moments, you know you're in for something big. You can sense it in the anticipation of the crowd, you can hear it in the announcer's voice as he bellows, "Hello, Chicago. Would you please welcome from England, U.F.O.!" And then it starts. Initially, just a single guitar belting out a classic riff, then the bass and drums kick in, and we're off and running. Recorded in Chicago and Louisville while the band was touring their classic Obsessions, album, Strangers in the Night, captures one of the great, unheralded metal bands at their absolute peak. Boasting the classic line-up with Michael Schenker on guitar, this is the definitive recorded performance of a vastly under-appreciated band, and, along with Thin Lizzy's "Live and Dangerous," and Kiss's "Alive," one of the best live rock albums of the seventies.

As an opener, "Natural Thing," the band's ode to a groupie with VD, is a charger. A near throw-away cut from the No Heavy Petting, album, here, played live, the song is completely transformed, brimming with energy and muscle, the track blasts out of the speakers with conviction. This is powerhouse 70's metal, with a deep bottom end supplied by the ever flamboyant Pete Way and the most straight-ahead riff Schenker ever wrote. Phil Mogg's voice is in especially fine form, a deeper huskier tone than most 70's metallers, here there's an extra layer of texture to his throat, a gruffer hint of the blues hiding under his wailing.

And we're just beginning. After a killer drum breakdown by original skin-banger Andy Parker, the song transforms effortlessly into the intensely melodic "Out in The Streets," Paul Raymond' delicate piano notes the glue holding the song together while the boys fly in and out of ballad-esque passages and searing metal. This is the other side of UFO, rarely credited to the band. As one of the first to truly fuse orchestration and metal, they almost single-handedly created the euro-metal sound and what has become known as the power ballad. Just listen to that guitar solo mid-way through "Out in the Street." Whether plowing through riffs or playing it soft, UFO fused each of their compositions with intensity. 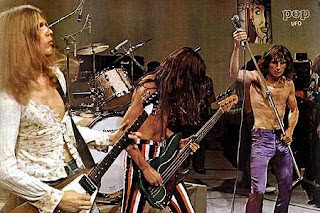 This is a breathless, heart-pounding performance, one track blasting right into the next. Whether tearing through the driving "Doctor, Doctor," or the charging "Light's Out," this is a band brimming with confidence, tight and sure in the power of their music and every move they make. Never is this confidence seen more than in the band's devastating performances of their minor songs like "Mother Mary," or "This Kids." Mere filler on the studio albums, here they are raging slabs of metal, Schenker's guitar histrionics near spellbinding as he blows through ferocious leads and lead fills, his fingers flying faster than any human being should be capable of. Don't forget, despite his rather unbalanced status of late, Schenker was revered as a guitar hero for a reason. Probably the most dynamic guitarist to come from the '70's until Eddie Van Halen, no one can solo like him. Plowing through scales and massive sheets of notes on his trademark Flying V he never loses tone, melody or clarity.

Without overstating it, the entire disc is a "raise your lighter," moment, arms swaying in undying praise to the staggeringly powerful performances, but if there were highlights that had to be chosen, the first would be the insanely beautiful rendition of "Love to Love." Forget Poison or Motely Crue, this is the original power-ballad, a grand, sweeping, orchestrated composition, piano trickling underneath Schenker's powerchords and incredible solo. Mogg diggs as deep as he ever has into his emotive vocal range, the sound of tears nearly choking in his throat as he sings the chorus. The second defining moment is undoubtedly Schenker's guitar freak-out signature song, "Rock Bottom." Don't expect standard three-chord riffing here. When Schenker creates a riff, most guitarists can't handle it. Here, his playing is literally out of his skull. With the band roaring behind him, he tears through the verses of the song in a mind-boggling frenzy until he hits the God of all live guitar solos. Nearly 8 minutes long, my mouth drops open in awe each time I hear the intense speed, his fingers charged with electricity. I've never understood how this song isn't regularly nominated for best guitar solo of all time.

Unfortunately, Schenker walked out on the band mid-way through this tour, derailing what rightfully should have been a future that made UFO a household name. While the band continued to produce some fine albums, it took all the way until their most recent formation with Vinnie Moore on guitar for the band to once again rise to glory. But from the old days, we have this album, a recorded legacy of what was and what could have been. Intense. Powerful. Melodic. Everything metal is supposed to be.

Buy here: Strangers in the Night

hell yeah, you got that right!

Lights Out (In London) - one of my favorite rock songs - these guys were a great band - too band Schenker is so unpredictable. That would be a reunion worth seeing!

I love live albums and this is one of my all time favorites. The new remastered CD sounds incredible.

This is the best album of all time. It has the perfect energy, performances, and the set list is flawless. This was the first album I ever reviewed on my blog. It is amazing. And i agree that "Love To Love" was the first, and best power ballad.

Get the remastered cd with bonus tracks. Great stuff.