I don’t know about you, but it’s always pissed me off that Meatloaf’s “Bat Out of Hell” album sounded nothing like the album art. I mean, here we got this freakin’ amazing Richard Corben painting of a muscular long-haired Adonis biker rocketing out of the confines of Hell aboard his skull-faced, quadruple exhausted hog from Hades, and inside we get. . . “ by the Dashboard Light?” Not to be knocking the Meatster (ok, maybe a little) but Jim Steinman’s quasi-operatic bombasts about love and teenage angst hardly warrant a cover that vicious. I mean, how much of a disconnect can you have?

But don’t worry, oh waverider, I’ve found the real album that cover was meant for. Blasting out of their own version of an acid-drenched Hell, Space Probe Taurus is a full on assault of methed up, fuzzed out, biker garage rock, brimming with enough muscle and punk energy to be deemed worthy of Corben’s masterpiece.

Coming from our favorite musical Mecca of Sweden, and signed to Buzzville Records, the SPT boys ask one simple question, how much fuzz can you take in your rock? Ramrodding their beastly songs right down your throat, SPT are some ungodly mix of Stooges energy, MC5 attitude, Mudhoney riffs and enough fuzz pedals to fill a fleet of 18 wheelers, this is Steppenwolf for the new millennium, maxed out, fuzzed out garage rock for the open highways. 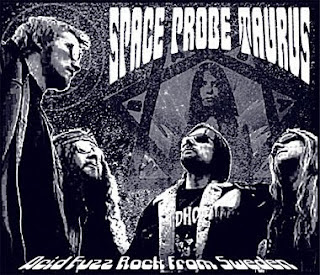 Quality songs like “Dig the Lizard,” “Molten Lava,” and “Psi-burn,” come at you like some freakishly distorted Fu Manchu/Blue Cheer hybrid, having ditched the Fu boys skateboards and surfer vans for quadruple exhausted hogs from the river Styx. Heavily influenced by the heavy psych scene as it evolved into proto-metal, this is biker rock on acid, Harley riders from Hell. Meaty and muscular, methed and maxed out rock and roll.

Bursts of fuzzed-out stoner metal like "Levitation," rock as hard as anything you'd ever want blaring in your ears. "Electric Exploson," is just that, a freaking explosion tempered through rows of Sjoberg's and Eronen's effects pedals. Through the walls of fuzzed riffs, drummer Sundler keeps time like some demented Keith Moon. Pounding with all eight arms and legs, he keeps pace more with his massive fills and dropped beats than any standard 4/4 drum lesson. Meanwhile, bassist Enberg must amputate a couple of digits with each song.

While the boys experiment with dynamics, a few slow passages to break the assault, this is essentially a full-open throttle blast of garage fuzz. That means that at times, the songs get a bit repetitive, but don't worry, they never lose their bite. It's just pure, balls out rawk and roll fun.

Do yourself a favor and give this beast a ride and flip Meatloaf off as you pass him by.

The boys don't have a video, but their music is used in this horror film movie trailer, just scroll in about half way to hear what SPT sounds like.

Posted by The Ripple Effect at 1:20 AM

Bursts of fuzzed-out stoner metal like "Levitation," rock as hard as anything you'd ever want blaring in your ears. "Electric Exploson," is just that, a freaking explosion tempered through rows of Sjoberg's and Eronen's effects pedals. Through the walls of fuzzed riffs, drummer Sundler keeps time like some demented Keith Moon. Pounding with all eight arms and legs, he keeps pace more with his massive fills and dropped beats than any standard 4/4 drum lesson.

I'm happy you didn't feel like you had found the music that would go with the latest Britney Spears album cover or something...

Thanks for the very kind words about the album and I can let you in on a secret, Enberg has robot fingers nowadays... that way he can shred on his bass and never fear losing his digits ever again.

I hope I can steal the line "How much fuzz can yout take in your rock?" and use with the band as I loved that.

This might sound moronic, but I'm really happy that you got us... that you understood what the hell we were trying to do and say with the album. Looking at my lyrics, not much, but still...

I love that you included that movie trailer as we are a band that are very much into lowbudget movies and this is the fourth one we are involved with up until now.

Thanks again for taking the time with the album and for this great review.