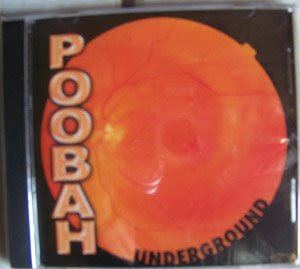 Long one of the world’s great cult treasures, Poobah, led by its fearless fret-meister Jim Gustafson, has been brandishing its unique blend of acid, psych rock for greater than 30 years now. Hailed by the Rock and Roll Hall of Fame as the "world’s most collectible psych rock band," Poobah’s early LP’s, like their 1972 debut, sell for upwards of $1000 if you’re one of the lucky few who can find them. Go ahead, check ebay. It ain't there. And despite having performed at the above Hall of Fame a record 12 times, played private parties for the Who and toured with the likes of ZZ Top, Judas Priest, Alice Cooper and the James Gang, you’d still hard pressed to find a handful of people in one room familiar with the unholy pounding metallic psych madness that is Poobah.

So, today we’re here to change all that.

Earlier, we here at the Ripple already professed our love for the psych/blues freakouts of the JPT Scare Band, and our dear friends Poobah would be the perfect band to promote on the same bill for an evening of extended acid guitar Ripple madness. Formed in the early 1970’s, Poobah crafted a proto-metal, heavy pysch hybrid, highlighted by searing guitar leads, that lasered through three albums in the 1970’s. Combinations of band lineup changes and management issues kept the boys from breaking out of the cult status and getting the recognition they deserved, but fueled by Gustafson's unfailing guitar obsession, they remained active, pounding out over 1000 shows and this molten slab of effect-laden guitar wizardry in 2005. Coming in at over 80 minutes spread across 16 songs, most clocking in at over 4 minutes, this is a throwback to the days when artists headed into the studio with a boatload of songs, a bucket of effects pedals and a driving lust to push the boundaries. Oh yeah, and some funny little mushrooms. 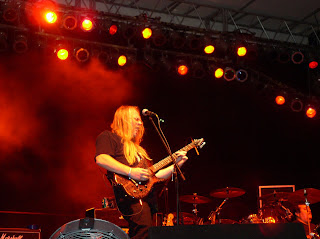 Recorded as essentially a two-piece with multi-instrumentalist Woody Hupp on bass and drums, Underground is a heavy psych lover’s dream; extended warped guitar notes flashing by in a flurry of acrid smoke and blacklight posters. “Underground,” sets the tone, riding it’s spaced-out riff, guitar lines warping in and out like fluid bubbling inside a twenty-first century lava lamp. Gustafson’s voice is in fine form, layering over the bass, as warped as those distorted notes from his guitar. And when the solo fires in, dancing through the mix like comets streaking through the psychedelic cosmos, you know you’ve found a home. How Gustafson hasn’t been given the accolades he deserves as a master of the fret, hammering on like Van Halen, distorting through walls of feedback like Hendrix, is as big a mystery as the existence of Big Foot.

"Secret," is a fuzzed out beast of a song, riffing over the Morley effect pedals before tearing into that solo. "Strange," comes at you with the fury of a mean acid trip, while "Seed," simply tears the tweeters from the speakers, blasting off in a feedback drenched volley of riffs and fiery leads.

At times thick and heavy with the edge of modern metal, (Psychic Malfunction), rooted in 12-bar blues (On the Out) or simply lost in space (Venus Patrol) Gustafson keeps the quality high, the guitars incendiary and the effects on full display. Like a blast of magic incense filtering through a night of madness, Underground is a dense explosion of guitar mastery from one of rock's great unheralded survivors. My fingers get blistered just listening to it all.

A quality recording from an enduring legend and a must for fans of heavy psych. Everyone, everywhere, all hail the Grand Poobah.

Posted by The Ripple Effect at 1:08 AM

I saw these guys live at the Cleveland Rock and Roll Hall of Fame in 2007. They rocked us good. Good review , too. Hail Poobah!

Poobah is a great band and deserves to be huge. I treasure every album by this cool band.

Poobah is an amazing band.Thanks for this information.Very good guitar .

Wait till you hear "Peace Farmers," if you haven't already!