It's a Small Stone World (after all)-Episode 1

For the uninitiated, Detroit's Small Stone Records is one of the world's greatest purveyors of top-quality, stoner, retro-seventies riff monster, kick-ass rock and roll. Amassing a stable of some of the genre's most respected artists, Small Stone cover all bases, from bluesy stoner blowouts to monolithically heavy cosmic masterpieces. With artists coming from places as far away as Iceland and Sweden to the good ol' local boys of Detroit, there's something for every one here, as long as they like their music, loud and fuzzed and about as subtle as a kick in the nuts. And around the Ripple office, we do (the music part, not so much the kick in the nuts).

So, what we're gonna do today, oh fearless waverider, is launch through a quick rundown of some of finest from the latest batch of Small Stone's releases. 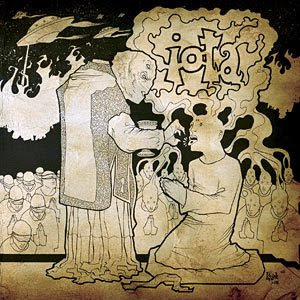 Blasting off like a runaway herd of raving mastodons launched into space at warp 9, Iota's new release Tales is an epic undertaking of stoner rock. Pushing the boundaries of the genre through the space/time continuum, the boys unleash a ravenous alien beast of an album, so punishing in its heaviness you'll need to hide away in a nuclear bunker not to be caught in its blast.

Fusing cosmically fuzzed guitars on top of their massively distorted riffs, Tales is an epic sci-fi journey, a concept album the likes of which haven't been seen since Sleep's masterpiece of droner metal. Riding high on Sabbath riffs, pounded through with the occasional backbeat of thrash, Iota take us blasting through the galaxies, meeting the "New Mantis," confronting the alien race, "We are the Yithians" and soaring into uncharted star systems, "Dimensional Orbiter." The vocal work, roughly similar to early-era James Hetfield, is slightly buried in the mix behind the attacking roar of the guitar, so I can't tell if the album tells a single story, but my impression is that this is the stoner rock equivalent of an old 50's sci-fi pulp novel, revealing separate tales of cosmic wonder with each pulverizing song. Pummeling in its intensity, grand in its scope. These guys are not lacking in ambition. Definitely worth checking out for those who like their stoner rock deeply fuzzed and very heavy. Buy here: Tales 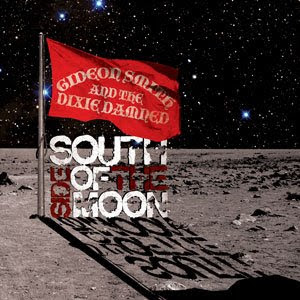 Gideon Smith and the Dixie Damned - South Side of the World

Coming from a different side of the riff-mad world of stoner rock, Gideon Smith takes charge of a disc like none other. Brandishing a gothic/rockabilly vocal attack not heard since the Cramps, and fusing that wild vibe to balls out stoner wail, Gideon knows how to make an impression. Not so much straight stoner rock but some wildly bizarre hybrid that I hereby dub, "massively blues-inflected, biker stoner-billy." We'll call it stonerbilly for short. Imagine if you will, a full-out head on collision between a gang of Harley bikers and a fleet of monster trucks on Halloween at midnight smack dab in the middle of a Mississippi bayou. What crawls out of the mud is Gideon Smith in all his flaming glory.

Recorded in Detroit and North Carolina, impossibly fuzzed songs like "Indian Larry," "Black Light Wizard Poster," and "Save a Dollar for the Dead," sound unlike anything else I've ever heard in the stoner world. "Black Cat Road," sounds like it should be the theme song to some horror remake of Deliverance, digging deep in a gothic southern vibe. "Devil's Ride," is as big and haunting as you'll find in the genre. This is full-on mad stoner riffing mixed with a hefty dose of good-old-fashioned psychdelia. Big riffs, big vocals, lots of inhalable plant material. What else do you need to have a good time? Buy here: South Side of the Moon 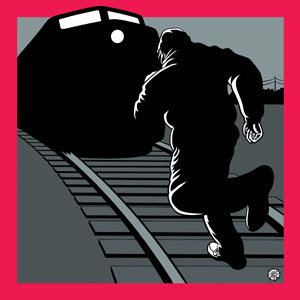 A Thousand Knives of Fire - The Last Train to Scornsville

For their Small Stone debut disc, A Thousand Knives of Fire actually released two albums on the same disc. Titled side one and side two, The Last Train to Scornsville finds a band exploring two sides of their kick ass muse. Side One, a ten stick of dynamite blast of roaring seventies metal riffs, wrapped up in some serious stoner grove. "One Eyed Jack," is about as instantly catchy as the Bubonic plague, with an intro riff guaranteed to blister your brain. "Hey, Buddy," has got to be a lost track by some forgotten '70's master, the riff is that crushing. I need to go buy a '79 Camero just so I can cruise Mainstreet with this beast blaring from my Jensen Tri-axels. The chicks will love me (won't they?).

Side Two, switches brain hemispheres. After the loosely structured "Last Train to Scornsville," the rest of the side finds the boys chasing the marijuna smoke through a whole series of extended bottom heavy jams, roughly broken up into separate song titles. The riffs are heavy, the exploration is deep, the smoke is thick. This is a mindtrip of stoner metal. Lava lamp not included. Buy here: The Last Train to Scornsville 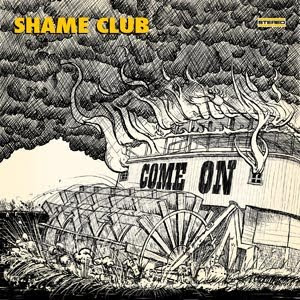 Playing an amped up, fired-up brand of southern-inflected classic seventies rock, Shame Club start off their new disc like a racehorse chomping on the bit, kicking at the starting gate, just waiting for it's chance to stretch it's legs and run. "Transamerica," rumbles out of the speakers, all stuttering, rolling riffs and circling bass. You've heard this song before, not really, but you've always wanted to. Somewhere in the back of your brain, if you knew how to write music, you'd want to write this song. And damn, you'd love to play it live.

"I Just Want You to be Free," follows, emphasizing one of the many things that separates Shame Club from their contemporaries. This isn't stoner rock, it's a fresh take on the classic vibes of the seventies. Heavy and thundering, yet melodic and sweeping, this is Lenny Kravitz with extra muscle. Aerosmith before the movie soundtracks and insipid ballads, beefed up and roughed up with a modern touch. It's seventies rock dropping down into the south on a touch of speed, filtered through a six-pack of Red Bull. It's surprisingly melodic and soulful vocals, harmonizing over riffs the size of Mt. Rushmore. It's actually lots of things, and they're all good. Buy here: Come On 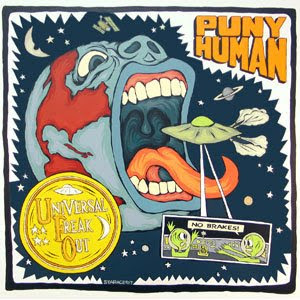 The court jesters of stoner rock, Puny Human have parlayed their no-frills chunky riff-mastery into a great catalog of fuzzed out tractor pull rock and roll. These guys riff with the precision of a gem cutter, stopping on a dime, dropping in a monsterous bass line, a scorching lead, then popping right back into the riff as if time had stood still. Featuring such songs as "Every Brain Cell is Immense,""Can't Clap with a Drink in Your Hand,""and, "The Bus Will Eventually Crash," the boys haven't lost their sense of humor on this, their third album, but don't dare think of them as a joke. These guys rock as hard as Clutch and they definitely know their Sabbath. Just check out the bass line and riffblasting the skin off your cheekbones to start "The Real Johnny Charm." Big and meaty, yet smooth as a tequila shot on a hot summer day. Fierce and drunk, just the way we like it. Buy here: Universal Freak Out

Puny Human "Jesus Has My Leg"

Posted by The Ripple Effect at 1:05 AM

man you are full of great reccomendations, i've been following them for a month or so on my travels in music; cheers; (also just discovered 'Clutch's From beale Street to Oblivion' pretty good);

thanks for these, loe your reccomendations, now how to get hold of them from down under, any ideas;

thanks for the great comments, that's what we're here for, to spread ripples, tell the world about all the great music out there.

As for getting these releases, go to smallstone.com and they have a company store. For most of our other posts, we usually include buying links for amazon or cd baby.

And for those who don't know Paul, check out his Rock Revival blog. The best classic rock news coming from Down Under!

I have heard all of these except Iota. Shame Club is my favorite of the other four due to it's easy grooves. A thousand knives of fire was the only that I couldn't get into, it was just dull and generic.

I think that's what they named their label after - the famous 1960's guitar effect used on MANY old 60's and 70's recordings - made by Electro-Harmonix, the same folks as the Big Muff Pi Fuzz Box (pun pretty obviously intended), Small Clone Chorus and the Electric Mistress Flanger, and many others.