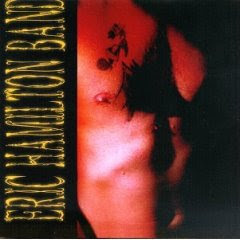 Way back in November of 2007, I wrote a review for Eric Hamilton’s Dear Pia. That review would never have happened if it weren’t for Keep the Change. You see, several years back, Racer stumbled on this album and kicked me a copy of it. Since that fateful day, Keep the Change has steadily climbed it’s way to one of my all time favorite albums. It rocks with a southern boogie-woogie groove and it chills with a soulful and pensive swagger. Desert island material, my friends.
Alright. Let’s get to the meat of this bad boy !

Right out of the gates, Eric and the band get the groove kickin’ with “Wall to Wall.” Driven primarily by acoustic guitars, the plugged in versions simply add texture and further the emotion as the song builds to it’s ultimate climax at the chorus. And, it’s a memorable chorus at that. Eric belts out the lyrics with his uniquely flavored vocals, conveying a grip load of adolescent attitude and the need to cut loose, to get crazy, and to raise the roof. You get the point . . . it’s an up beat party number that will get you moving, and it doesn’t stop here. “Edith” picks up where “Wall to Wall” left off. Another up beat tune, and also driven by the acoustic guitars. Speaking of which, the engineers captured a great tone on the acoustics, throughout the album, as they shimmer through the mix. As the band comes out of the three headed solo of harmonica, guitar, and organ, feel the emotion as they build from the vocal / percussion break, and ultimately explode into the chorus. Magical!

The band slow things down a bit on “Jon Wayne Sunset,” but not by much and nor does this mean that the emotions taper off. This track quite possibly captures Eric’s voice at it’s very best. Through the verses, he approaches the vocals with a more understated voice, almost a drawl, and as he hits the chorus . . . shit! That comes from the soul, my friends! A bit countrified, but the melody is as addictive as any drug out there. The lyrics get me every time and I’ve been known to belt this one out on the freeway. For any of you who’ve been stuck in traffic next to me at these moments, I apologize.

“Ain’t I A Mess” is in a similar vein as “Jon Wayne Sunset,” packed with emotional vocals, perfectly captured acoustic guitars, and a rhythm that’ll keep you bouncing. Eric Hamilton changes things up a hair with a humorous ode to some fantasy he has about Brooke Shields in “Brooke Shields’ Mouth.” This is another tune that you can’t help singing along with, especially as Eric mentions that he “wears elevator slacks and dances like Michael Jackson.” Initially, the lyrics seem a bit silly, but it’s hard to pass over anything sung with this much passion as corny. On deeper inspection, the tune is about believing in something for the simple reason that you can.

Bare with me a moment as I break into a spastic session of air drumming . . . alright. We’re good.

Eric Hamilton goes into serious chill mode on “Home Together” by dropping the tempo way down. Another great vocal performance as he gets the soul just pouring from his pipes. This is one of those tunes that will get your leaning back, putting your hands on the back of your head, and just smiling. Beautifully conveyed lyrics of spending one more night with a lover that just lift the heart. Can’t be helped. It’s powerful stuff, that love thang.

Shifting from a variety of different musical styles, Hamilton shows that he’s influenced by a muse rather than some latest trend. “Lay That Top Down” kicks in with a jazzy, swing-type thing that jumps. Pushed along by the piano work of Jeff Armstrong, this tune will have you dreaming of cuttin’ a rug swing-style. “Angry Sea” is more of a radio-ready straight up rocker. “Trouble On The Way” is along the lines of a soulful folk tune one might hear played on a porch in the deep south. “Mushrooms” is a bluesy tripped out rocker. Variety, baby!

Every time that I listen to Keep the Change, I marvel at the musicianship and passion that’s been captured. We don’t get to hear that too often, especially in this day and age of candy coated, over-produced, factory rock. Sometimes it feels that the days of the true musician . . . the guys who toil in and out of love, in and out of jail, in and out of luck, are a thing of the past. The truth is, those guys are still around, we just don’t get the opportunity to hear about them as often because the music industry is more concerned with selling music for advertisement than for musical content. The only thing Eric Hamilton’s music could be used to advertise is a bottle of backwoods hooch, a broken down shack, or a crushed up pack of cigs . . . simply because the music is real. And really, isn’t that what we all want from our music? - Pope JTE
Buy Eric Hamilton here:

I've been listening to this CD for years! A couple of friends of mine helped record this album and slipped me a copy. I've loved it from the moment I listened to it. To see the band play live was something to behold...truly an awesome live show.

It's a damn shame that Curb Records completely dropped the ball in promoting this band after they singed them to their label.

i have had "keep the change" a long time... everyone that hears is absolutly love it... the eric hamilton band is so unlike what you hear on the radio and that is one of the parts that that make them amazing!!!

This morning I found my long lost copy of Keep The Change -- it was sent to me when I was running a college radio web site -- anyway, it brings that whole period back as a big ass sense memory -- there hasn't been a band like this one probably ever

I had the pleasure of seeing the Eric Hamilton Band perform live numerous times in Nashville, & on their 50 States in 50 days Tour in VA Beach VA. The studio album "Keep the Change" is GREAT, you wont be disappointed if you buy it. The album almost does justice to their live shows. These guys are very talented and come from all types of different backgrounds. You'll never hear a better 6 member band anywhere. And yes Mike Curb dropped the ball bigtime not promoting these guys better than he did.

I used to live in Nashville. One night I went to Third and Lindsley and saw the Eric Hamilton Band. It was a life changing experience. They absolutely rocked! I long ago left Nashville, but I left my heart there for Eric and his band. I wish they could go main stream. I honestly believe they have the talent and sound to please many, many people.

I spent many evenings in little dives all over Nashville back in the 90's listening to this band. Awesome musicians live! The record is great but some of those live recordings will blow you away! They did fabulous cover of The Joker by Steve Miller Band! The energy I felt listening to this band live could only be matched by Tina Turner, but more intimate and personal! Thanks for your review, I'm always telling my music loving friends to look this band up on iTunes! Cheers ☆