The Crumbsuckers - Life of Dreams 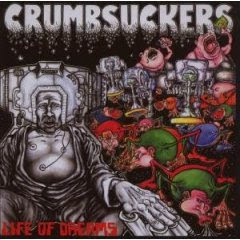 The time: Freshman year of high school. The place: Uh . . . high school.
So, there I was. I remember it as clear as ten minutes ago. Sitting in the back of my Spanish class, minding my own business. You know, doing the usual classroom stuff . . . fantasizing about being a rock star or getting the hot Spanish teacher to do one of those naughty Van Halen video things. My reverie was suddenly ripped asunder as one of my mates literally threw himself on my desk. Eyes wide and panting, he uttered words that seemed to make no sense. “Crumbsuckers” was the only word that came from his mouth as he swiftly lifted himself from my desk, planted a wet one on my forehead, and ran out of the classroom.

After class, I tracked this dude down, slapped him over the head for bringing unwanted attention to my corner of the classroom, and asked, “What gives?” He simply smiled and handed me a copy of Life of Dreams from Crumbsuckers.

At the time, I was a kid who loved all things metal, who had just started dabbling in punk and hardcore. I was still wet behind the ears to most of the stuff. So, along come Crumbsuckers, and I get the ultimate amalgam of the New York Hardcore sound and the frenzied riffiness of Bay Area Metal. Life of Dreams played an important role in my musical development. Along with Suicidal Tendencies first album and Excel’s Split Image, Life of Dreams led me to a very special world and there was no going back.

“Just Sit There” opens with what appears on the surface as a standard metal riff, but 19 seconds in, the guitar disappears and the menacing bass line kicks in with accompaniment of vocals that could peel the stucco from my house. Then it’s a speedy, meaty moshfest that lasts for a hair over a minute. No muss, no fuss. Next song. “Trapped” kicks in and we’re pulled into the pit once again. Beautiful mixture of hardcore and metal on this one. Fast and aggressive to start things off, then it drops to a mid tempo groove before featuring . . . gasp! . . . a guitar solo. Life of Dreams is rich with treatments such as these. I could break down every tune, but then things would get redundant so I’ll just point you in the direction of some of my favorite moments. Turn your ears over to “The Longest War,” Brainwashed,” and “Face of Death” and hear how each tune features some outstanding metal moments with equal parts hardcore sensibility . . . and vice versa. 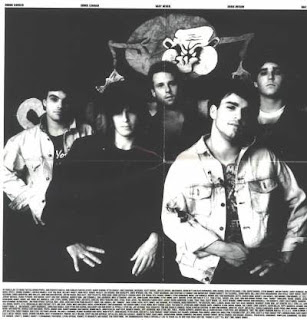 As I’ve revisited this album, I’ve noticed the musicality behind it more so than when I was a mosh happy teenager. Matured ears? Probably. But, check out the clean arpeggio’s at the intro to “Mr. Hyde” and listen to how they build the tune before it explodes into a hardcore flurry of aggression. The tune twists and turns with a ton of riff and tempo changes, creating a manic, schizophrenic beast of a song. Heady for it’s time.

Life of Dreams covers a bevy of topics, and considering that this was in the height of Reagan’s reign over the U.S., there was a ton of lyrical fodder to be had out there. Most of the songs deal with the seaming hopelessness of carving out a life in this society, and the emotions are conveyed in a fairly eloquent fashion in tunes such as “Shits Creek”, “Trapped”, and “Return To The Womb.” Denouncing the president, our governments foreign policies, religious fanaticism, and human stupidity cover some more of the topics throughout the disc. And then, of course, you have “Hubrun” where it’s listed as “Words: Insignificant.”

Crumbsuckers only released on more album after Life of Dreams before disbanding, but they left a lasting impression on those who heard them. Many of the so called hardcore bands or metal core bands of today have the Crumbs to thank for shoving their sound down our throats. Along with Excel, D.R.I., Cryptic Slaughter, and a host of other trailblazers, they created a scene and a sound. And, on top of that, Life of Dreams has held up surprisingly well. There’s nothing worse than playing an album that you loved as a kid to find either the music, or you, didn’t age well. Life of Dreams sounds just as poignant today as it did in ’86, and what I’ve found most frightening is that things within our world haven’t changed all that much. We still have the same war mongering personalities running the country. We still have religious fanaticism and a church of followers asking for our money. We still have drug addiction, a materialistic society, and homelessness. Hatred, poverty, sickness. Yet, some still live a life of dreams. Remember to get out there and vote this November . . . for what good it’ll do ya’. - Pope JTE

Posted by The Ripple Effect at 1:03 AM

I loved this album and first heard it in 1986. I have it on vinyl, but probably have not listened to it at least 5-6 years. They were very much a part of the all too brief crossover phase where metal and hardcore breifly merged thanks to a few bands. Their second album was very disappointing though, it was like very thin speed metal with little of the aggression or flavor of the debut.

Mark - I still have the vinyl copies of both albums, and I agree. The second disc was an initial disappointment, but it's one of those albums that I eventually warmed up to. I'd like to go back and give it a good listening to and see if it's as good (or bad) as I remember.

Definitely a classic of the crossover period, I actually like this a little more now than I did back then. Sadly, I only have a cassette I'd recorded 20 years ago and neer picked it up on vinyl. Not as big of a regret as not buying Cro-Mags Age of Quarrel, but still a hole in my collection.

Bob - You gotta' replace that thing! The CD version sounds great and I was a bit surprised at how the the Crumbs still sounded relevent. Now, as for Cro-Mags . . . I need to break that one out again. Age of Quarrel spent many a day on the turn table as a kid. Thanks for bringing that one up!

The lyric to Hubrun were labeled insignificant as a compromise to the vocalist on the album. He did not condone the subject matter of the song, as it had to do with weed.

These guys were great players. One of the guitarists (can't remember his name but he quit the band not too long after this album came out) was really into King Crimson, Zappa, etc. I got to see them many times and they were always great.

Was the guitarist Matt Cardin or Dave Wynn by chance? They were both into Crimson and Zappa but Matt is a Zappa Disciple!

Matt actually contributed a bunch of ideas to both records, and briefly replaced Dave after LOD came out, but only in rehearsals. As for "Hub Run" it is my opinion that labeling the lyrics as "insignificant" only added to the allure and lore of that song.

I'm a little late to this discussion but what the hell. I was already pretty deeply into both the underground metal and hardcore scenes when I first heard these guys. Blown away is an apt description, no band sounded like Crumbsuckers at that time. Fast, heavy, pissed-off with an obvious hardcore bent yet featuring a technical proficiency and songwriting ability more akin to the metal side of the spectrum. It still holds up today, there isn't a single dud on Life Of Dreams.