Brain Police - Beyond the Wasteland Someday in the future, when they've demolished the world and taken over each nation with their impassioned brand of fuzzed-out, monster-riff stoner rock, it'll be possible to talk about Brain Police without mentioning that they're from Iceland. But until then, the boys of BP, as they're known by their legions of fans, will have to get used to the rest of the world constantly referring to their country of origin.

Why? Well, there aren't too many places as foreign or remote to America as Iceland. Even the name conjures up fantastic images of prehistoric worlds or sci-fi planets (of course, those of us in the know learned a long time ago that Iceland has been named with Norway the most developed Nation in the world and enjoys a greater amount of economic freedom and civil liberties than we do in the USA, but I digress). Still, it's relative remoteness lends a certain romantic imagination about the island nation. Adding to that, the only popular Icelandic musical exports have been the Sugarcubes, Bjork and Sigur Ros, not necessarily what you'd call full on kick in the balls rawk and roll. So, I think I can be forgiven for suddenly being floored that the monolithic riffs blasting out of the Ripple speakers come from just south of the Arctic circle.

But, motherfucker, they do.

And what a godly assault of vertebrae rocking stoner metal it is. Huge in their native land, racking up top ten singles and being praised as one of Iceland's greatest band, the Brain Police have been a tightly kept secret outside Icelandic shores. But not any more. Now signed to Small Stone Recordings and benefiting from world-wide distribution, the word is getting out in a big way. And here at the Ripple office, we got the disc baby and we're gonna tell the world what the good folks of Reykajavik already know. BP rules. 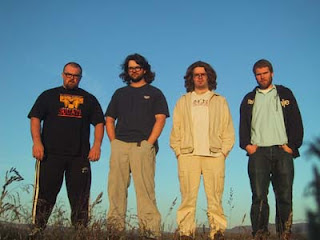 Playing a pure brand of groovy-bottomed, stoned heavy rock, Brain Police is a direct assault of turbocharged, high energy, 70's riff maddened rock and roll. Give it a listen and it'll hook you as effortlessly as it hooked me. Two seconds into the opening track, "Rooster Booster," I was already grooving to the stuttering riff, dropping down with the perfect bass heavy groove. This is stoner rock for the highways, an anthem to the open road and unexplored spaces that needs to be made the lead-off cut on any roadtrip compilation playlist ever to be recorded. I defy you to plunge into that tune without once, not once, grooving your head in a headbobbing salute to the masters. If you can, then you're just wound up too tight. Jens Olafsson's vocals tinge with just the right amount of melodic gruffness to be smooth, yet rough, and don't even get me started on Bui Bendtsen's fuzzed out brief but effective guitar solo.

Perhaps no other songs sums up what the boys are about better than "Hot Chicks and Hell Queens," a blistering, nitro-fueled explosion of riff, bass and thundering drums. Here, the boys lay out their life philosophy, their reason for existence. After screaming to take over your women, they lay it out. "Please be there/we're all slaves to the sound/this is all there is/this is all we need," Olafsson sings over the unfaltering poundng beat belted out by drummer Jon Bjoran Rikardsson and Hordur Ingi Stefansson on bass. The song is passion in action, a thunderburst of stoner metal. Women and music, baby. Women and music.

Bearing all the expected stoner rock influences, shades of Kyuss, Fu Manchu, Monster Magnet, plus an untold load of seventies riffmeisters, I've heard people complain that the genre of stoner rock is a redundancy, hairy guys belting out recycled seventies riffs. To which I say, "hang tight, grampaw." Brain Police aren't reinventing the wheel here, there playing rock and roll. What matters is the musicality that they bring to the scene, the intensity and honesty with which they belt it out. Forget the past, that doesn't matter anymore. All that matters is the sound coming to you right now. And to that regard, we have deemed it good. Fucking good. 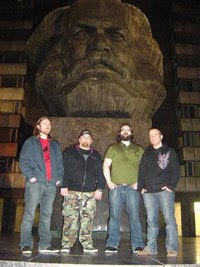 "Black Tulip,' rages back, swirls of Fender Rhodes swirling underneath the distorted blues-inflected riff. "Thunderbird," by all rights should be a stoner rock classic, a can't miss looping bassline pinned under a swooping, slightly spaced riff and cosmic tones. Olafsson gives his best vocal performance, his holding of tone perfect, locked into the tight melody. "Snake," lurches out with a fantastically distorted bass groove, the snare popping on top before the first shades of fuzzed guitar layer on. Then the song takes off straight into a chorus that you'll find yourself humming days after you've last played it. "Mystic Lover," rocks with space guitar supernovas, "The Baron," is a full on assault of riff, rhodes and melody. "Leo," circles somewhere around the constellation cannabis, while "Master Volume," brings in the tones of the Sabbath forefathers of it all. There's not a weak track here, all the way to the closer "Sweet Side of Evil." It's all just one blissed out heavy rock ride.

For those who've become a bit jaded to the stoner scene, afraid it's all been done and played out. I got news for you. As long as there are beards, bongs and garages loaded with amps and effect pedals, the scene won't go away. Too many of us get off on that crazy groove of stoner rock done right. If you look hard enough, you'll find there are still boys out there, fueled with passion and a jet fuel load of energy, who can still bring it on home. Even if that home is in Iceland.

These videos don't come from the Wasteland album, but give a sampler of taste.