Battleroar – To Death and Beyond 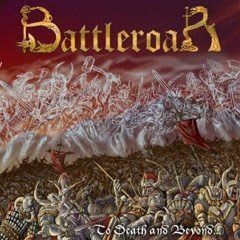 As the eastern sun rises above the horizon, it illuminates a congregation of man, beast, and machine. Two armies as far as the eye can see, converge on a grassy plain. The anticipation of the coming battle weighs heavy on the hearts of the armored men. Fear permeates from the throng of bodies. Banners snap in the momentary gusts of wind as it sweeps across the fields of doom. Horns announce the approach of further garrisons, and sweat begins to bead on the brow. The multitudes suddenly part for their heroes as they prepare to lead their troops to oblivion. And then, for one brief moment . . . quiet, and peace.

Then, the two armies hurl themselves across the grasslands. Galloping towards a mirror image of itself, the first wave of attackers trample the brush and kick up dust, until the two forces ultimately collide. Before long, a tangled mass of humanity writhes in violence upon itself and blood soaks into the earth.

That’s the image I got from the first two minutes of Battleroar’s To Death and Beyond . . . epic power metal in the vein of Iron Maiden that just played tricks with my imagination. Though the lyrical content of the first track, “The Wrathforge,” doesn’t necessarily have to do with the ancient warfare of the Bronze Age, it does still have to do with the valor of battle. The feeling is conveyed well through the soaring vocals of Marco Concoreggi and the searing guitar work Kostas Tzortzis and Manolis Karazeris. The arrangement of the lead tune is complex and held together by the tight rhythm team of bassist Gus Macricostas and drummer Nick Papadopoulos. This quintet are the special forces team enlisted by one of the armies to the left, or right, of my minds eye. You know, those bad ass guys you call when the regular forces just aren’t gonna’ cut it.

The bands epic musical approach continues on “Finis Mundi” as it opens with the orchestral strain of string arrangements and lilting vocals. The acoustic guitar that kicks off the intro riff shows that Battleroar don’t rely on simple force to get their message across. There’s a finesse to their movements . . . to their multi-note attack. Once the band enters the fray, it’s a full on metal fest. The main guitar riff is text book traditional metal and carries the band through the melee on the grasslands with nary a scratch. Check out the instrumental break in the middle of the tune, as the band returns to the intro orchestrations. Nice change of pace to keep things continually interesting and Concoreggi’s voice continues to radiate as the band comes back in to cut a swath through the enemies ranks.

More bodies fall before the band of brothers as the pummeling bass lines of “Hyrkanian Blades” announces it’s arrival. The double bass drums propel the band forward, and me thinks that at this pace, Battleroar should take the oppositions stronghold by nightfall. Great tempo shift in the middle of this one and a sweet, melodic guitar solo to follow. “Warlord of Mars” and “Death Before Disgrace” close the album and find the band wreaking utter havoc in the enemy encampment. Up tempo numbers that only slow down so that the band can pause long enough to gather their surroundings before they tear shit up again. I especially liked the bass work in “Warlord of Mars,” which also features a well arranged instrumental passage that would make Maiden blush. Also, listen for the instrumental tension builder in “Death Before Disgrace.” That, my friends, is good metal!

Don’t think that the band is all about death, destruction, and warfare. When their not spilling the blood of infidels, they’re letting their hair down and singing the praises of the early days of heavy metal in “Born in the ‘70’s.” Actually, this is a great bonfire song to celebrate Battleroar’s inevitable conquest of a lesser opponent. It’s an anthemic tune and highly infectious. Go ahead and try to not hum along with it. I won’t tell the band, but somehow . . . I think they’ll know if you’re not. And after reading what they just did to an army of thousands, do you really want to test fate? Nah . . . me either.
All kidding aside, To Death and Beyond is a killer traditional metal album that just gets the imagination going. It reminds me of my formidable years of listening to Iron Maiden, Judas Priest, and Dio. Straight up, ass kicking metal that’s just different enough to keep my attention through all of the nifty mood and time changes. It always comes back to dynamics. Yeah, maybe some of this has been done before and there are production flaws, but who cares? This is a fun listen and one can instantly tell that the members of Battleroar are enjoying their work. Fictional and literal. - Pope JTE

Buy here: To Death and Beyond...

I'm obviously going off-topic, but -- when did you guys get a radio show? I might have to call in and cause trouble, hehe.

Yes, our friendly Hatter, we now have Ripple Radio, coming to you live, streaming and downloadable. Currently, we're once a month, but I think we're going to make the time for twice a month. And don't worry about being a bother, we're already planning on asking each of our favorite blogger brethren such as yourself, The Guru, Mr. Vinyl, Metal Mark etc to join us for a show, bringing 3 songs from artists you'd like to Ripple to the world. We'll let you know when that happens (after we get our feet wet a bit).

Sweet. I just thought up three songs just now. Let me know when you plan on doing it. I'll need at least a week in advance to train myself in proper speech enunciation -- otherwise, no one will be able to wade through the thickness of my accent.