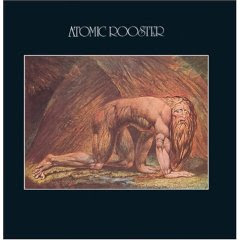 
Death Walks Behind you has been hailed a classic of early prog and proto-metal, and with its incredibly dark theme, doom-laden lyrics, horror-filled drama and sprinkling of morbid fears, it may be one of the earliest precursors of what became Death Metal.


Featuring the band’s first ever hit, “Tomorrow Night,” a deeply twisted and demented love song which climbed to #11 in the singles charts in February 1971, this is the album that broke the band. A staggeringly heavy, virtuostic display of early metal and prog. Crane was elevated to the level of Keith Emerson, Brian Auger and Graham Bond for his fluidity on the keyboard and his proficiency as a composer. Perhaps most amazing, despite their pulverizingly heavy sound, Atomic Rooster at this stage had no bass player, Crane knocking out all the bass parts on his organ with his left hand or the organ’s foot pedals. With this work, Crane laid down the foundation of what would become keyboard metal. He created a sound, if you can envision it, much like ELP crossed with Sabbath. 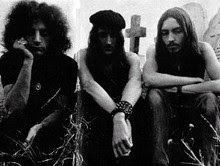 “Death Walks Behind You” is a stunning opener. Starting with the creepiest, most haunting descending piano intro I’ve ever heard, pierced with psychotic shrieks of guitar feedback, this is every horror movie you’ve ever seen put to music. This is fear itself, trickling off the keyboard. Then, when the guitar kicks in with that riff, as heavy and menacing as anything on Sabbath’s debut, you know we’re going somewhere. While Sabbath brought their love of old Hammer films to their music, Atomic Rooster brought the whole damn graveyard. This is a terrifying slab of paranoia, night fears and morbid terror. “Lock the door/switch the light/ you’ve been so afraid tonight/ lie awake/from the past/count the nine lies that you’ve had/Start to scream/ shout for help/ there is no one by your side/to forget/what is done/seems so hard to carry on.” Then the chorus, the repetitive pleading that “Death Walks Behind You,” sung over that pulverizing riff. This is as dark and heavy as any song to come from the seventies. 7 minutes and twenty-two seconds of demented terror brought to life, one of the first ever moments of heavy metal.
“Vug” (see second video) is an extended, early prog freakout of organ, jazz and classical all scorched over a bluesy shuffle beat. An extended 5 minute prog-blues jam, this was jazz-fusion long before the term ever existed. This fuses effortlessly with“Tomorrow Night,” (see first video) one of the darkest love songs to ever be a hit. Starting with a solo piano, accompanied by scratching guitar, the song explodes into one of the most perfectly simple guitar riffs of the seventies. Propelled by a stomping beat they even throw in some cowbell (more cowbell!). Listening to this rocking tune, you’d never know it was a love song, you’re more taken by the tormented lyrics showcasing Crane’s debilitating insecurities. “When I wake up in your bed/I can still hear what you said/Like a bad dream I can’t fight/tomorrow night.” Featuring a dynamite organ solo in the middle, this is a rocking, stomping number with a great guitar solo outro, leading to a total breakdown into dissonance and early noise rock. Not surprisingly, this ending was faded out for the single version
“Sleeping for Years” starts off with psycho guitars warping back and forth between the speakers, guaranteed to send chills down your neck before the full blast of all-out proto-metal. There must have been something in the water over in the in 1970, the same year as Sabbath's debut, to have produced this much disaffected heaviness at once. A blistering riff, scores of screeching guitar fills, a tremendously melodic breakdown of a chorus, emotive singing, marching drums and a bonafide out of his mind guitar solo. What else did you want with your metal? 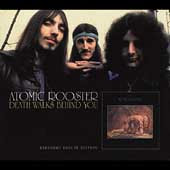 “I Can’t Take No More," the shortest song on the album (only one of two to clock in at under 5 minutes) is about as straight ahead as the boys play it. I swear part of the chorus melody line was stolen years later by ELO for their hit “Don’t Bring Me Down,” “Nobody Else,” features some of Crane’s most beautiful piano playing, creating a melody of uncommon beauty. And haunting, as DuCann adds the difficult lyrics, “My whole world is coming down/ My whole world is gone away.” This is depression put to music, suicide in script. Then, lest you forget that this is a metal album, midway through DuCann launches off into his most inspired playing, ripping through a melodic lead before the song breaks back down to the piano line.
Without a doubt, Death Walks Behind You, is a classic, a masterpiece of early proto-metal, reveling in and animating the demented, horribly tortured mind of the band’s musical genius. Atomic Rooster would go on to an even greater chart success when in 1971 “Devil’s Answer,” climbed to #4 on the charts off the “In Hearing of Atomic Rooster” album. But soon after that, DuCann and Hammond left to form their own band, Hardstuff. Vincent kept the band name alive, going through various line-ups that at one point featured Gillian bass-player “Big” John McCoy and Cream’s Ginger Baker, but in the end the Rooster faltered.
Finally, unable to keep those haunting demons at bay, Crane committed suicide on Valentine’s Day, 1989. Seen in this light, Death Walks Behind You was horribly prophetic. As opposed to so many of the dark, death metal bands that flirt with depression, suicide and death as if it were a gimmick to sell albums, Crane was in truth a terribly tortured soul, who’s music was his only outlet of expression to let the demons free and bring some peace to his troubled mind.
As it stands, we’re left with this mesmerizing, deeply engaging, bottomlessly dark and heavy album, one of the first heralding cries of the coming of metal.
Posted by The Ripple Effect at 1:26 AM

This was definitely an influence on what know today as stoner and doom metal. It's so dark that it makes Sabbath look the soundtrack to a Gene Kelly movie.

Sound right up my alley - since I'm trying to incorporate more progressive elements into my own tunes - the Hammond Organ never seems to fail when you need something other than a guitar.

I heard this record for the first time about a year ago and was really blown away. I love Deep Purple but am not a big fan of ELP and Atomic Rooster is kind of a cross between the two. I love playing the title track for Pentagram fans because it sounds just like them.

The Cars kinda took from the same Atomic Rooster song that ELO did. Listen how similar the lead vocals and rhythm guitar are in the verses of both 'I Can't Take No More' and The Cars' 'Bye Bye Love'.