Petty Crux - All That Survived the Crash 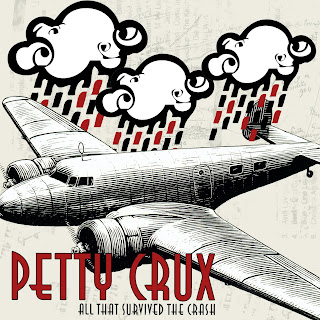 Petty Crux is an earworm.

Now, if that may sound like a strange way to start a review, let's back up just a little bit. Petty Crux is a powerpopping, brit-rock, indie band, currently taking New York by storm. Having played at all the major clubs in the Miami area and winning the 2006 Miami New Times Battle of the Band, the boys simply needed a larger stage to set their eyes upon. They've been called by those in the know "bold and engaging, with superstar written all over them," and claimed to be a "rival of any good Brit pop band coming out of the U.K."

And they're an earworm.

One of the great things about our job here at the Ripple, is that while we're sifting through the musical detritus that lines the rock and roll highway, we occasionally stumble upon a treasure, a tiny gem, sparkling under the faint glow of recognition. Clemente, one of the main Cruxers, popped their self-produced debut All That Survived the Crash, over to our illustrious office and eventually it landed on my desk with all the fanfare of another piece of junk mail. A car wash coupon. A pizza flier.

What I didn't expect was an earworm.

So, always working for you oh waverider, I plunked the disc into the player and immediately started bopping my head to "Real Love," a crushing, chiming display of smooth powerpop with a killer riff, nice vocals with a swooping bass line leading to a charging chorus. It was then, while I was grooving with the boys, digging what they were laying down, letting that fantastic hook penetrate my body, that the earworm made its way into my brain. Days later, I was in my closet folding clothes, hanging my vast assortment of rock and roll t-shirts, when I found myself singing a song. But what song? I didn't even recognize the melody coming from my own mouth and then it hit me. "Real Love," had worked its way into my brain. It was now a part of my consciousness. It was that good.

And that's what an earworm is, a line, a hook, a melody that works its way into your brain where you hear it over and over. When that song is a television jingle it can be torture, but with the Petty Crux melody, it was just good fun, like having a jukebox bolted into my head.

Then, suddenly, "What do You Care," with its spasmodic, angular guitar riff rocking over a Gang of Four or the Automatic beat followed next, emanating from my mouth with a chorus as memorable as anything to come from the current wave of postpunk guitar bands like the Killers or the Strokes. I could hear the sparkling guitar, that incessant, instantly catchy hook. I was banging my hands against the closet door to that driving drum beat that sends the chorus into fifth gear. All I could remember thinking was that this song needs to be heard, it should be huge. The earworm had worked its way from my cortex to my auditory center.

"Slow," a mournful ballad came next with its swooping vocal line, a beautiful and evocative tune. "Heroes Are Lonely," breaks form, launching off with a jazzy drum and keyboard intro harkening back to the days of Level 42 or Curiosity Killed the Cat. There again were those smooth, soaring vocals, the insistent guitar lines, beautiful background vocal harmonies, a head-bopping bass line and a chorus that seared straight into my nervous system. The earworm had worked its way deeper, now entering my limbic system, where "Apocalypse. . . For Now," drove the damn thing home. Following a scattering, chopping guitar riff, and thudding rhythm, the boys craft another perfectly paced powerpop gem.

Is "All That Survived the Crash," a perfect album. Well, no. Overall, the songs suffer from a lack of production like you'd expect from a self-produced release. "Take My Hand," a tender ballad, is just screaming out for orchestration and a symphonic accompaniment, but these are minor complaints, simple things for any powerful producer to smooth out and embellish. What Crash, does show is a band brimming with potential, capable of crafting some instantly memorable melodies and the skills to drive those melodies soaring to heights that few bands can obtain. The future will decide where Petty Crux take their talent, but we at the Ripple will be there, waiting, watching to see what happens. Waiting for Clemente and the boys to drill that next earworm into my brain. The first one's already made its way to my cerebellum, so I guess I got room for more.

Sorry, the boys don't have a video yet. But check them out at www.myspace.com/pettycrux. The songs are available there for download. Check out "Real Love," "What do You Care," and "Stand," to get a glimpse where these guys are coming from.
all that survived the crash britrock CD Review download free podcast indie rock music review new music Obscure petty crux

Unknown said…
Saw these guys a few months back. Instantly hooked. See them immediately, if not sooner, if you like good music.
June 16, 2008 at 9:00 AM

Anonymous said…
I've seen them here in Miami and they blew me away. I totally jam out to their music on myspace at work every now and then...great band!
June 16, 2008 at 2:09 PM

Anonymous said…
Petty Crux is one of the newest innovative bands out there right now. There music has a way of embedding in your brain in such a way that after hearing the music once, you'll be singing along for weeks.
Definitely a Band you'll want to keep track of.
June 18, 2008 at 10:12 AM

Anonymous said…
I just keep listening to "Apocalypse" and "Real Love" over and over again. I can't get enough, they rock! are you guys playing anywhere soon?
June 20, 2008 at 9:33 AM

Anonymous said…
It's about time somebody wrote a review of these guys! All of Russia fell in love with them when they opened for U2 in eastern europe. I was lucky enough to catch a show then. Hopefully I'll be able to catch a show in NYC some time soon.
December 11, 2008 at 9:00 AM

Petty Crux said…
Join us as we make our anticipated L.A debut this Wednesday April 15th at King King Hollywood. We will be sharing the stage with a great L.A band- People On Fire for a great night of music and booze... $5 cover at the door.