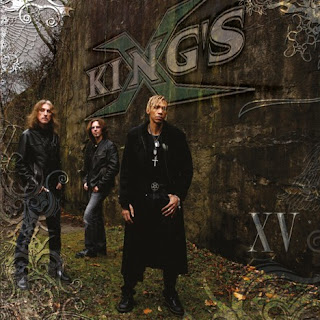 When I stumbled on King’s X, I was in the midst of my fascination for thrash metal and the deep, dark, and hairy aspects of metal. I had seen the video for “King” (Out of the Silent Planet) on Mtv’s Headbangers Ball and immediately fell in love with it. Due to limited funds and a difficulty in acquiring LP’s, it was a few years before I could get my hands on that album. Now, after staring long and hard at my wall of CD’s, I have to ask . . . was that really fifteen albums ago? Next question: Where the hell did the time go?

I’m not going to try and say that I know more than the next guy about King’s X, I’m really not interested in being that guy. My fascination with the band started with the first album, and duly, the band has supplied the soundtrack to much of my post high school life. Therefore, I’m not going to say that their latest release, XV, is better or worse than any other album from their catalog. If you know anything about this band, it’s that every album has it’s own distinctive sound, and XV is no different.

“Pray,” “Rocket Ship, “Alright,” “Move,” and “Go Tell Somebody” all feature that classic heavy groove thing that the boys do so damn well. Doug’s distorted bass bounces it’s way through the tunes, which are then highlighted by his gravelly, yet soothingly soulful voice. Ty adds subtle guitar flourishes before committing a hundred percent to the underlying groove at the choruses. Jerry, the drum-meister that he is, adds beats as if he were laying bricks for the foundation of his new home, meticulously placing the pieces in their place to create a castle of music. Beware the groove, folks! Each one of these tracks has the power to get even the stiffest body moving with the rhythm. Play these songs in a graveyard and watch the ground come to life all Thriller-zombie style. Ha . . . then it’d be called a grooveyard! Damn, I crack me up!

To contrast these heavier groove oriented tunes, “Repeating Myself,” “Julie,” “I Just Want To Live,” and “I Don’t Know” are reminiscent of all that great radio rock from the ‘60’s and ‘70’s. Ty takes over the vocal duties on these tracks and simply sells them. Much more mellow than the Doug fronted tracks, these songs tend to show the softer side of the band in that the tempo is generally more laid back. Ty’s vocals have a dreamy quality to them . . . maybe even a bit whimsical. Radio friendly? Perhaps. I guess it all depends who’s turning the knobs at the radio station. If it were Ripple Radio, then most certainly. Note the guitar solo on “I Don’t Know” and see why Ty is one of rock music’s most revered talents. The vocal harmonies at the end of the tune are also a great touch.

XV is another fine King’s X album and fits in nicely with the rest of the back catalog. It’s not as proggy as their earlier stuff, and it could be that they’ve been there and done that already, so why go down that road again? What they have created is a disc full of good songs. Damn good songs, really. Are they groundbreaking songs? No, but they’re honest songs devoid of frivolous hey-look-at-me-moments. XV could actually act as a good lesson plan for up and coming bands. Cut the shit and write from the heart and you too can release fifteen albums over a twenty plus year career. On top of all of that, with every spin of the disc, it seemingly gets better as I hear things that I missed on previous listens. I love that in an album coz’ then I know that the next time I play it, chances are I’ll be hearing something new. As Doug so aptly sings on “Go Tell Somebody,” “If you like what you hear, then go tell somebody.” I’ve taken those words to heart and I’m out here telling all of you. Pick up XV, embrace the groove and feel the love! - Pope JTE

Posted by The Ripple Effect at 2:57 AM

I'm still a bigger fan of the older stuff -

"Gretchen Goes to Nebraska" had Ty's most interesting guitar tones -that "spitty" classic Strat thru a real loud amp.

Oh, man -- Headbanger's Ball! I miss that show. It was bad enough we had one measly chunk of time, but then they got rid of it. Now MTV doesn't have music, funny funny.

I'll add this to my impossibly long list of to-listen albums. I'm almost strictly thrash, but I try not to be.

I used to listen to Kings X awhile back, but I haven't really listened to much metal over the past few years. I do remember being very impressed with their music though.

XV...Straight up rock from the good ol' U S of A! Can't wait to see the boys this time around. King's X proves again to be one of the most "musical" of rock bands. Tight grooves, great harmonies, varied tunes. This one's in the player every week and will be for a long time to come. Not only is this great rock from excellent musicians, they remain relevant and fresh while many of their contemporaries are tired has-beens touring county fairs.

Just a note to say that drummer Jerry Gaskill provides the lead vocal on "Julie", not Ty. XV is a solid album - the tracks really come to life when played live and compliment their early material perfectly.