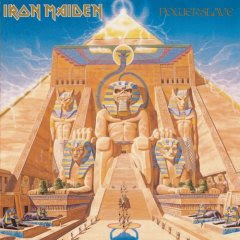 With this installment of The Ripple Effect, I’ve climbed into the vault, scavenged around the miscellaneous piles of discs, and I’ve inhaled more dust than any civilized person ever should. At times, I even battled rats the size of small cougars. Whoa . . . are those human remains of there? Jeez . . . the things I put myself through just to bring you good music . . . Jacque! I hate snakes!
Once I brushed the dust off of this gem and reacquainted myself with the vivid imagery of the ancient Egyptian funeral procession, I was overwhelmed by the nostalgia of the first time I heard this album. With it’s references of demon seeds and unborn being killed in the womb, Iron Maiden’s Powerslave was almost taboo for me when it came out. You see, I had a fairly conservative and religious upbringing and, at the time, I remember actually thinking that these guys were devil worshippers and there’s no way I would ever having anything to do with them. It’s funny how attitudes change with a little perspective.

The album kicks into high gear right of the bat. “Aces High” is a remarkable track in that Iron Maiden, Steve Harris in particular, was able to capture the urgency of the WWII air fighters as they had to scramble to action. The immediacy of the song is overwhelming at times, and ones imagination can easily soar with the subject matter at hand. 1940’s era prop planes spinning, turning, and diving through the lead and debris littered skies of Europe . . . even the guitar solo conveys the chaos of the mid-air dogfights. A mere four and a half minutes long (comparatively short by Iron Maiden standards,) “Aces High” ends and the listener is left reaching for a towel to mop the beads of sweat that have formed on the brow.

“2 Minutes to Midnight” opens with what has become a classic heavy metal riff, and as the rest of the band joins that riff, a classic heavy metal song is born. This is a fabulously crafted song about World War III and nuclear destruction, both in lyric and in composition. In context, the aforementioned demon seeds and dead unborn references are meant more to drive the point of the lyrics home than to pay homage to the Prince of Darkness. Once you’ve digested the lyrics, pay close attention to the guitar solos as Dave Murray and Adrian Smith work together to fill the first solo with harmonies, and then branch off to provide their own individual touches on subsequent solos. The musical connection that the band has is most evident as they climb out of the solos, one member reaching over the next, to eventually find themselves plowing through the final verse and chorus.

The cleverly titled instrumental “Losfer Words (Big ‘Orra),” “Flash of the Blade,” and “The Duellists” close the first half of the classic format version of the album. Though not as powerful as the first two tracks, these songs aren’t throw-aways either. The hammer-on’s over Nicko McBrain’s straight forward beat on “Flash of the Blade” provide enough nuance to keep the listener intrigued. Again, the guitar work is the stuff that has made Murray and Smith legendary in the metal community. Check out the harmonies that the duo provide through this solo, as well as that of “The Duellists.” Like I said . . . legendary.

The second half of Powerslave kicks off with “Back in the Village,” in another up tempo rocker. Keep a close ear out for the references to past Maiden tunes in the lyrics . . . it's a clever little touch provided by the writing team of Dickinson and Smith. But, it’s the title track and the disc closer, “Rime of the Ancient Mariner,” that cap this album off and make it the classic that it is. The Egyptian themed “Powerslave” is a galloping behemoth of a tune describing a Pharaoh’s inability to relinquish his power and succumb to death. Dickinson’s passion shines as he falls into the role of the Powerslave. The instrumental break led by Harris is top notch, and the guitar solos are emotional passages that begin mellow, but burst into a sudden flurry of notes. Amazingly, that uncanny mental connection the band shares seamlessly brings the instrumentalists back to the main riff of the tune . . . galloping in time to the rhythm to the tunes completion.

Ultimately, it’s the 13 plus minute epic, “Rime of the Ancient Mariner,” that most people associate when Powerslave is mentioned. Though Iron Maiden had dabbled with epic songwriting in the past (“To Tame A Land,” “Hallowed Be Thy Name”,) it wasn’t until Steve Harris penned “Rime of the Ancient Mariner” that the marathon song style would forever go hand in hand with the band. There are several facets that make this particular tune work. First, it’s has a great lyric. Second, it’s musically composition is in a standard verse/chorus/verse format. Third, the instrumental break, complete with the lyrical poetry of Samuel Taylor Coleridge, is intriguing enough to keep the listeners attention. Finally, and possibly most importantly, the members of Iron Maiden perform the song with every fiber of their being. Everybody played their role in the tale and a magnificent recording was captured for all of us to enjoy for the rest of our lives. If anyone had given less, the song wouldn’t have the staying power that it does.

Arguments will always rage between Maiden fans on what is the best album in what has become a rather lengthy catalog. Quite honestly, those are petty arguments. Powerslave is too powerful and critical of an album to be disregarded for any reason. Some might say it’s the last classic from the band, others, such as myself, see it as the bridge to further musical advances and later classics. The truth of the matter is that the band has created a lasting legacy of well crafted music, and Powerslave should never find itself tucked in the back of the hallowed Ripple vault ever again. This one’s staying by my side because it’s too damn good to let out of my sight. That, and I don’t want to put myself through such discomforts rummaging through the vault to find it again . . . though, I am a wee bit curious as to who’s remains those were. - Pope JTE

Posted by The Ripple Effect at 3:45 AM

Ahh, this one came right in the thick of the prime of the greatest metal band of all-time. Fantastic.

It took me a while to get into this one - after Piece of Mind, it was almost becoming "cliche". But finally it wore in, and became one of my all time favorites.

They're still great musicians today, even in their 50's!

My favorite Maiden album, and as Bob said, from the greatest metal band of all time. I was ecstatic when they played "Rime" on this current tour...wonderful presentation on top of it being the greatest metal epic of all-time. Glad you got over the wrongful satanic stigma. On that note, I shall retire to bedlam with the Iron Maiden and the NWOBHM DVD

Thanks for the comments, Ray. I know the Pope agrees with you on that point.

And keep up the great work on your blog, the minute rules!