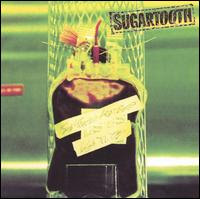 It wasn’t until very recently that I found myself remembering the joy of hearing the needle drop into a groove of a record before the music started playing. At first, I thought that it was sheer nostalgia but now I realize that it was the expectation, the coming of the sound that I was in secret giddy delight over. Certainly the “white noise” that ramped up to Immigrants Song on Led Zeppelin III was almost a furthering of that.

So it is hard to get the same visceral thrill from CDs or MP3s, at least in the same way. I no longer appreciate the beauty of the perfectly organized side one and two in the same way, since you used to have that forced intermission in the sonic storytelling.

And then there is Sugartooth.

Yes, badass, motherfin’ Sugartooth who single handedly came along and became the band that your mother thought Black Sabbath was. From the first power chord, to the 12 bar intro, to the heavy waves of sound that spill from your speaker, Sugartooth found the proverbial fountain of youth; not their youth, yours. Your mis-spent videogame playing, comic book reading, Playboy sneaking youth, getting hammered by the sound of "Paranoid" and "War Pigs," has led you straight to a band that understood everything that was cool and good about those songs and is feeding it right back to you in its beautiful sounding CD glory.

With riffs that sound as inevitable as powerful, "Sold My Fortune," clocks in at 4 minutes and 35 seconds and only takes about 35 seconds of those to make you feel 13 years old again. Locked my memories away, thoughts I keep by the door, no he’ll never run away, bought a gun to keep me warm Who cares what Mark Hutner’s singing about on "Barrel," once the guitar solo comes in you’re taken away. Joey Castillo is all over the album with drums that recall a less frenetic Stephen Perkins. "Cracks in the Pavement," lodges a chorus in your cortex that will likely be there when they do the autopsy. Well I slipped on the cracks in the pavement, never seen before, and I laughed in amazement, at the smile I wore

"Tuesday Morning," opens with two simple chords that, given the last three songs, drip with menace, because you know, YOU KNOW, that the loom presence of the band is only a few steps away Can’t save my mind, save my mind, can’t save my mind, can’t save what little's left And when they do come in, they are heavy and monolithic, but they never overplay their presence. If there is anything that Sugartooth does so right is to scramble all the things that work in this music and get the balance just right. The light and shade is all there, Led Zeppelin showed the way and even opened the door, but so many bands just won’t go in. “Sabbath with touch” might be a good description. "In Need," "Sheffeild Milestone," and "Gather Me," are all cut from the same great cloth.

"Leave My Soul To Rest," and "3rd Day To Forever," close out side one. Yes, I’m pretending that this is on vinyl so go with me. Leave my soul to rest, watch my body growing old, you may not wonder why is both an aching cry and powerful command before Hutner’s solo sells the whole point home. "3rd Day," smartly, is all acoustic, and the sound is a breath of air to the lungs. Silently I’ve been screaming, no one else understands, I feel nothing A better description of teenage years I’ve never heard.

"Black Queen," opens up side two in a frenetic blast where Castillo shines bright on the drums with time and tempo changes, but the second side is a quieter side as well. "Between the Illness," is reflective, while "Sound of Her Laughter," brings things to a close with quiet beauty.

Nancy Reagan take note: there is a reason that the CD cover has a picture of the two hemispheres: this is your brain on Sugartooth.

Posted by The Ripple Effect at 1:18 AM

good stuff...i don't know what happened to my cd:(

Sugartooth was a phenomenal band! I wish to god that this album was circulated more heavily. It's feeled with pure rocking angst, none of the feelings seem forced at any time. A true gem

Thanks for your comment, Michael. I agree. I love this disc and would've reviewed it myself if the Fearless Rock Iguana hadn't beat me to it.

Thanks for checking us out. Your enthusiasm is infectious. That's what we're here for, to spread the word on some under-rated gems.

One of my top 5 favorite bands. Both CD's are awesome. I find it difficult to find their self titled CD. Any ideas on where I might search for it?