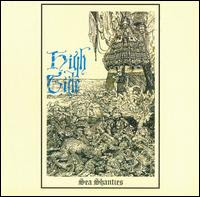 One of the things that followers of proto-metal and the birth of all that became heavy love the most about their music was the sudden dissolution of the rules. Following the pop sheen of the sixties 3-minute singles and the twee acoustics of psychedelic explorations into a happier time and place, proto-metal found music crashing back down to an earth brutalized by the Vietnam War, poverty and heroin addiction. Suddenly, the old standards no longer applied. Music was darker, edgier, rupturing at the seams, more dangerous than ever, and no one could tell you what the fuck you were supposed to do.

Perhaps no band better sums up this attitude than High Tide.

Imagine if you will the unholy bastard child of the Doors psychedelia and early Sabbath heaviness with an electric violin tire-ironed into the mix in the place of Ray Manzarek's organ. Now if that sounds a little hard to put your finger on, imagine that violin not being content to hang out in the back ground, playing gentle atmospherics and fey melodies, but instead going head to head with the lead guitar, flying off on epic battles of searing leads while the bass and drums pound out a relentlessly heavy bottom end, all mixed in with Jim Morrison on vocals.

I can't imagine anyone knew what to make of Sea Shanties when it was first released in 1969. While the Beatles were happily singing that they all lived in a yellow submarine, and CCR was releasing their first three albums, High Tide unleashed this ungodly, glorious mess of a record onto the English public. "Futilist's Lament," (see 1st video) sets the stage beautifully, foretelling the brutal cacophony that was to follow. Starting off with a devastatingly heavy doom-guitar riff then drum and bass intro that predates Sabbath by a full-year, the song flies off into a swirling maelstrom of piercing guitar and slicing electric violin. On top of it all, Tony Hill's bleak lyrics leak out in the most sincere Jim Morrison-like delivery I've ever heard. Simon House's violin slices through the mix, a searing torrent of doom psychedelia clashing against, and at times ramming through Tony Hill's effect-laden guitar. Through it all, drummer Roger Haden and bassist Pete Pavli pound on as if they're completely unaware of the monstrous cacophony exploding before them.

"Death Warmed Up," (2nd video) is a nine-minute instrumental heavy metal assault of violin and electric guitar trading licks and fuzzed-out effects. Prog never got any heavier than this, with House's violin refusing to step back from the forefront, matching Hill's guitar lick for lick. "Pushed, But Not Forgotten," slows tone temporarily, adding a softer, jazzier, dare I say beautiful moment to this catastrophic album. Again, Hill's Morrison-baritone emotes over a softer violin, piano passage until the 1:30 mark when hell is once again unleashed on the earth in the form of scorching violin and mind-melting bass. To House's absolute credit, his violin mastery is so profound and his tone so unique, sometimes it's impossible to tell the lead violin riffs from the guitar. It all blends together into one unholy schizophrenic rush.

"Walking Down Their Outlook," follows a similar formula before the next epic-du-metal, the nine-minute "Missing Out," belches out of the speakers, an impossibly heavy, bass distorted dissonance of guitar/violin bestiality. There's no denying it, friends, this is metal. Just not any metal you've ever heard before or since. Finally, the album winds to a close with "Nowhere," leaving your brain a poached, steaming mess of coagulated white and grey matter.

Rightly so, Sea Shanties has been regarded as an absolute classic of dark, doom-laden psychedelia and proto-metal and has a ravenous cult following. Many argue that this was the heaviest rock album of 1969, blowing Zeppelin away, and who am I to argue? Original pressings of the LP's sell upwards of $1000, if you can find 'em. Fortunately for us, or unfortunately for the rest of the music hearing public, Repertoire Records has re-released Sea Shanties on CD and it can be readily found without too much of a dent in your wallet.

But be warned, oh faint of heart, High Tide isn't for everyone. But for those deep fans of hard psychedelia mixed with blistering Sabbath riffs, blues and prog metal, give it a try. Pop it into your player and listen as the gates of Hades open before you.

Posted by The Ripple Effect at 6:45 PM

Hey Ripple, even thought our "genres" don't match perfectly - I think we both share similar tastes in some music. Nice blog! Added you to my links :)

I have been wanting to hear this band for several years, but it goes for much money normally.

Thanks for this. I've been meaning to check these guys out for awhile.