The Automatic - Not Accepted Anywhere 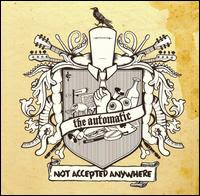 I know exactly when it happened.

There I was, after a busy day working for you, oh loyal reader, digging through the mountainous stacks of CD's that cover every square inch of floor space here at the Ripple office. From the middle of a random pile, I pulled out the promo copy of The Automatic's debut album, Not Accepted Anywhere.

Now, unbeknown to me, The Automatic, hailing from Wales, were all the shit in the U.K. (the guys are known by the ungainly mouthful of the Automatic Automatic here in the States and Canada.) Apparently they stormed up the charts in 2006 and ripped apart all the festivals during that wacky summer festival season that the brits do so well. But here, in the good old U.S. of A., if there was an Automatic furor, I missed it on my way to Starbucks.

So, in popped Not Accepted Anywhere, with absolutely no expectations. The first track, "That's What She Said," started pleasantly enough, a few tightly plucked electric guitar notes followed by an explosive flurry of vocals; a nicely rough-hewed lead vocal and a rather bizarre high-pitched ghosting vocal that sounded astonishingly like a young child stuck in a well. Not bad, kinda funky, a little different.

And then it happened.

55 seconds into that first track, I fell in love. Riding on the massive crescendo of punk guitar, vocals and noise that raged to the full-on shouting chorus, suddenly it all dropped out. What I was left with was a perfectly pitched solo bass throbbing out a few low slung notes before it dropped right into a downright funky-ass electropunk riff with sychizophrenic schisms of guitar slicing through that throbbing heartbeat of a bassline. Beautiful.

You see, one thing that's been lost in the post-Joy Division worship of '80's revisionists like Interpol, Snow Patrol and Bloc Party (as good as those bands are) is that not all post punk was dark and sombre, brooding and intense. Back then, we liked to rage and party as much as any other generation, we just liked our music to do it with an edge. Forget the mindless trance, we wanted punk energy and we wanted it dark and we wanted it funky and we wanted it fun. And that's what the Automatic figured out. For every Joy Division there was a Gang of Four. For every Bauhaus there was a Killing Joke. We had apb. Music that still carried that post-punk, this-is-a-whole-new-world vibe, but did it with a funky bass and filled the dance floor.

"Recover," the fourth track, encapsulates this ethic perfectly. Riding a fantastic post-punk bass vibe, directly inherited from Dave Allen, this is Gang of Four for the new millenium. This is their "I Love a Man in Uniform," an angular, stabbing slab of funk with an unforgettable call and response chorus. If these guys had been around when I was DJ'ing at KSPC, this would've been my signature song, played at the beginning of each show to wake the listener's ears the fuck up, warn them that something hard and heavy was coming their way and it's time to get their ass in gear. Once again, check out the composition at the 50 second mark. After riding that electroshock bassline with the guitar sitting on top, it suddenly drops out for the second verse, leaving the guitar to pick out the skeleton over the barebones drumming and vocals, finally scratching out the verse. Then the bass comes roaring back, stuttering through a counter bass line. Subtle, but fucking effective. My only complaint is that at 2:53, the song is way to short, ending just when it should be tearing off to orbit. Someone give me an 8 minute remix and I'll be in postpunk funk heaven.

"Monster," lives up to its billing as a monster of a tune. Starting with shimmering guitars and a high-picked bass, the song is more reminiscent of The Sound than Joy Division. But then it all erupts in a jet-fuel explosion of roaring punk guitar raging into the undeniably catchy chorus. While I have no idea what they're singing about, when they cry out, "what's that coming over the hill/is it a monster/is it a monster?" the chorus stuck in my head like bubblegum stuck to my brain. "Raoul," another hit in the U.K., follows suit, a rampaging stunt of funk fueled with quirky punk energy and prodigious pop hooks.

Is Not Accepted Anywhere a perfect album? Well, no. Some of the songs get repetitive and I still haven't decided if that ghosting high-pitched, kid-stuck-in-the-well vocal is an interesting, unique twist or an annoying contrivance. I'm sure many fans debate this point. But in the end, it doesn't detract from the fact that these Welsh lads got some serious chops and a load of talent. Let's give the guys some time to mature and develop, see where they want to go with their sound. Not just anyone could bring back that throbbing punk funk of Gang of Four, and the Automatic do it without ever looking back. I understand that they're in the studio right now, finishing up their new disc. We here at the Ripple can't wait to hear it. If they can build on the masterful work they poured out on "Recover," and "Monster," there will be a hell of a lot of pogo dancing bouncing on dance floors across the U.K. And the world.

Posted by The Ripple Effect at 5:09 AM

You've got me interested in this one, Popester. And I'm not even an INTERPOL fan! Will check it out