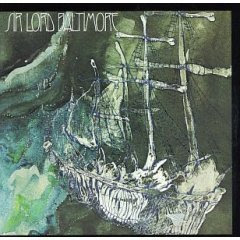 People will debate endlessly about who founded that musical beast we've all come to know and love as heavy metal. And while arguments can be made that Blue Cheer unleashed the world's first heavy metal song with their noise-core version of "Summertime Blues," or that Cream or Zeppelin laid the foundation, the argument is really moot. In the end, Black Sabbath created and defined all that is heavy about metal. God bless their horror-movie inspired souls.

But let's twist the question just a little bit. Which band was the first to ever be called heavy metal? Hmmm, now that's a scratcher. And if it wasn't for the name printed across the top of this review, I myself might not have been able to figure it out. But there it is. Way back in 1971, Mike Saunders reviewing the 1970 SLB release Kingdom Come for Cream Magazine said, "Sir Lord Baltimore seems to have down pat most all the best heavy metal ticks in the book." There it is. The first use of the phrase Heavy Metal to describe a type of music.

And a legend was born.

Employing a sound far heavier into distortion than almost any other band of the time, Sir Lord Baltimore in their own way helped to define heavy metal, and in particular, pave the way for what would evolve into my personal favorite metal bastard, stoner metal. Add on top of Louis Dambra's screeching guitar noise, the infamous siren vocals of drummer John Garner and some serious bottom-heavy distortion coming from bass player Gary Justin, and it's no wonder these guys are thought to influence everyone from Pink Floyd to Kiss and beyond.

So what's the album sound like? Like a whirlwind ravaging the earth; fierce and loud and mean and everything that became heavy.

"Kingdom Come," starts the disc off, roaring out of the speakers and from the very first massively detuned, fuzzed out bass note, you know you're in for something a far cry away from the Beatles Abbey Road. This is where it all began. This is Monster Magnet, while Dave Wyndorf was in diapers. This is where Fu Manchu and Kyuss first nuzzeled at the breast of metal, drinking in the milk of all that's mutated and heavy. When the spaced out guitar rips in spasms and fits like a massive dose of electroshock therapy, it ushered in a whole new era of guitar effects. Finally John Garner's baritone wails forth, bellowing out quasi-mystical preaching and SLB have officially ushered in a new era of rock. Still seeped in psychadelia, this is clearly the end of the flower children bringing forth something altogether darker. Without overstating anything, "Kingdom Come," should rightly be heralded as a proto-metal, stoner rock masterpiece.

Remember, this album came out in 1970, the same year as Sabbath's first album, and the amazing thing is that SLB manage to sound pulverizingly heavy without sounding anything like Sabbath. This is heaviness in mood and intent, and it is magnificent. Garner's vocals, the subject of much accolade from fans, went on to influence a generation of singers. Sounding nothing like Robert Plant or Ozzy, Garner struck out and created his own avenue for heavy vocals. In his soaring baritone you can hear shades of what would become Ronnie James Dio and even Bruce Dickinson. He set the tone.

And the album doesn't let up. While the quality of some of the songs may be debated, classics such as "I Got a Woman,""Hell Hound," and " Lady of Fire," rock as fiercely as any thing from the era. Searing guitar lines slicing through and bottomless pit of heavy bass. Just listen to "Helium Head" in the video below. Freak out on that guitar tone, dig into that riff, the scratching chords, the Bill Ward drums. This is the birth of metal, baby, in all of its ugly bastard intensity. And it still holds up today.

Sir Lord Baltimore never rose to the international acclaim that should have been their destiny. After Kingdom Come, they only released one other album, the self-titled Sir Lord Baltimore, before dissolving. Nicely, that second album is packaged here as well, given you the entire SLB output. While not as raw or fierce as Kingdom Come, the second album still contains some great proto-metal guitar theatrics, demonstrating a band searching to find their sound.

SLB were working on their third album when they disbanded. Recently, John Garner and Louis Dambra have gotten back together and completed the tracks that would've been that album. It's available from Garner's web page as Raw, and well worth picking up. Ask nicely, and Garner will even autograph it for you. Not bad, how often do you get the signature of a legend? A review will be coming on this disc later.

For now, all ears should be on Kingdom Come, must hearing for fans of all that is heavy and rock and an absolute classic for the lover of that great, lost proto-metal vibe. Take my advice, turn on the lava lamp, refill the bong, turn down the lights, slip on the headphones and suck in the infinite heaviness of the birth of stoner rock.

And don't forget to pass the munchies.

www.sirlordbaltimore.com or order directly from:

Even though the pics look the same, the two videos below are two separate songs, "Hellium Head" and "I Got a Woman." Turn them up loud!!

Anonymous said…
Great article. Also be sure to check out my interview with John Garner at this location :