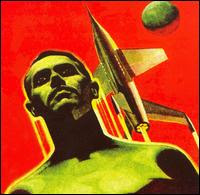 Back when I was in high school, there was a guy named Forney who's parents had a huge ranch way down a country road outside town. Let me tell you, there was no bigger night waiting in store for us hormone-crazed teenage boys than when the battle cry of "party at Forney's" soared through the air of the school halls with all the velocity of an airborne virus. Forget all the "high school" movies you've ever seen, the true definition of a "kegger" was a Forney barn blow-out; beer kegs piled on top of haystacks, a sea of black Cameros outside dueling with the pickup trucks for parking, drunk high school girls in way-too-short shorts, the obligatory testosterone-fueled fist fight, freshmen puking in the corner, and of course the music.

God bless that music. With speaker's perched precariously on outdated farming equipment, the music set the tone for the night. It didn't matter what it was. Sometimes, AC/DC alternating with Ted Nugent. Other times Thin Lizzy with a little Skynard. Zeppelin, April Wine, UFO, Scorpions. It was all the soundtrack of my life.

For all of you out there who remember your own 70's high school party blast, or were born too late but god-damned you wish you'd had one, Mos Generator is the band for you. Firmly committed to bringing back that monstrous riff-heavy rock of the seventies, but dragging it kicking and screaming into the new millennium, Mos Generator create their own version of a great beer party blowout soundtrack.

A power trio from Washington, bringing in rock veterans Tony Reed from Treepeople, Scooter Haslip from Voodoo Gearshift and Shawn Johnson from the lost classic band Mind Funk, these guys play it clean and hard. Blasting off with a furious NWOBHM staccato riff before dropping down into a massively bottom-heavy Sknyard-esque groove, "Silver Olympus" sets things off revving at 400 hp. A custom-made air-guitar freakout, this is the type of song that would've had the guys at Forney's head bobbing in a massive group, trying to impress the girls with their freakish air guitar mastery. Of course, the girls would've looked on bemused, but truthfully not giving a fuck.

Just listen to the way that first track segues down to "NandV", the riff not stopping but slicing into a muscular, mid-tempo rocker. Tony Reed screeches out all Paul Stanely in his vocal approach, but actually a better singer. Better able to carry a tune with gruffness and some southern soul to his vocal chords without ascending into Stanley's habit of screeching the high notes. In some ways, this track may best represent what Mos Generator is really all about. This is Kiss in a head-on collision at the demolition derby with Skynard in some god-forsaken Alabama town. Not stoner rock, the guitar tones are too clear, this is a return to the muscularity of classic 70's rock in all its bastard glory.

"Son of the Atom Smasher," continues on, jackhammer heavy 70's metal being belched out from the pit of the tractor pull. "Wizards of the Prophecy Pen," drops in a touch of Sabbath riffing, then again that Skynard vibe highlighted by some quasi-mystical, sci-fi lyrics. But in reality, its all about the riff. That freaking riff, guaranteed to loosen a few brain cells from your head thrashing in time to the groove. Bass and drumming are solid, just as they are through out the whole disc. Mos Generator is a tight unit, obviously playing what they love.

But just when you think you've got the guys totally nailed, "Acapulco Gold," sets you off soaring onto a Steely Dan inspired ode to that delectable herb. This is Mos Generator's "Sweat Leaf," but complete with jazzy breaks and a near Santana-esque guitar tone. Then suddenly, "Sleeping Your Way to The Middle," launches back to the full-on 70's metal freakout, a great bass line tripping underneath the searing guitar. Insert image of hands raised in Ronnie James Dio devil horns here.

While it's impossible to describe Mos Generator without making reference to all those classic 70's acts I've named dropped, it doesn't mean these guys are derivative. Rather, it's a compliment. If you asked them, they'd drop these same names as bands that they've worshiped, been inspired by and emulated. They set out, pockets loaded with testosterone and a clear disdain for all the watered down, pretty boy, sensitive pop currently dominating the airwaves, to bring back good, old-fashioned pile-driving riff rock. This is classic rock for the future, made by guys who aren't afraid of their own testicles.

Now go out and buy your own kegs of Budwieser, find an abandoned barn, bring a Camero full of air guitars and clear some space for the freshmen to puke in. High school is back in session and Mos Generator are bringing on the soundtrack. Be prepared, fights will break out. You've been warned.