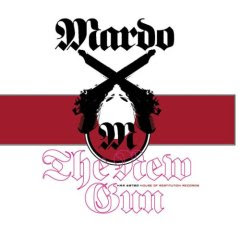 I've got a thing.
Actually, that came as a total surprise to me. But in the last several months since we lauched the Ripple Effect onto an unsuspecting world, it's become more and more apparent.
I've got a thing.
Dare you, oh loyal waverider, ask what my thing is? It may not be what you think. Turns out, I got a thing for classic style garage rocking bands fronted by a couple of brothers. Previously, in these hallowed pages I'd sworn up and down the accolades of my favorite brothers-fronted band from Oxford, the Thieves and their groove of garage rock with classic rock roots and brit rock flourishes. Now, it's time to move our musical compass west, way west, to the baking shores of Southern California, the home of my favorite pair of Californian garage-rocking brothers, Aron and Robert Mardo, and their grand statement to rock and roll, Mardo.

And man, do the brothers Mardo know how to rock. Blasting off with a double shotgun drum detonation before tearing into an incendiary guitar riff, "Lolita Live and Learn" explodes off the The New Gun, blazing in garage rock fury. And that riff!! That riff and the chorus will work their way so deep into your brain you'll need a pneumatic drill to dig them out! Don't go looking here for lyrics about the deep meaning of life, this is an unabashed avowal of love to a trouble-making, tight-jean wearing seventeen year-old siren and all the heartbreak that comes with it. Any one who ever grooved to Jet's "Are you gonna be my girl?" has got to give this song a whirl, but be prepared, the adrenaline is amped up to 10 on this one.

"Killer on the Dancefloor," rages out next without missing a beat, muted guitar blaring over the drums until the main guitar riff kicks in. Simple, yet effective, it's been ages since an American band sounded this damn much fun. And the song couldn't be more aptly named. Check out the video below. When Mardo sings, "You gotta shake it, girl, shake it baby, shake it/ You gotta shake it like a bang, bang bang," over that pulsing beat and that killer riff, you better believe you'll be leaping to your feet and shaking it as well. Writing this review, I couldn't help myself. I kicked my computer aside, jumped right up onto my desk, swung my arms in the air and boogied my ass a full 360 degrees.

It wasn't pretty. I think my wife is blind now.

And just when you think these guys are all about the adrenaline rush of classic garage rock, "The Healing," lilts out, acoustic guitars strumming while Aron Mardo sings plaintively a prayer to God or whatever higher spirit moves him. Expressing a feeling we've all known at least once in our lives, asking for just one good reason to keep on living. But rather than being overwrought or morose, the song soars to a rousing chorus, with a composition and vocal harmony line that must be making Def Leppard kick themselves in the ass that they didn't come up with it first.

Then the rock kicks back in. Blasting through blazers like "Bombs Over Broadway," with its goddamned funky call and response vocals, through the slightly more polished production of "Thin White Line," all the way to the show stopper, "Bang Bang: The New Gun," with its fiery guitars, 70's hammond organ and soul-filled horn breaks, the boys never let up. Clear to the hidden track at the end,there's no better compliment I can give this CD except to say; it's fun. And in the end, isn't that what it's all about? Rock doesn't always have to be a gloomy trip through self-depreciation and pity in shoegazer land, it can be fun. Good old fashioned balls-out fun.

And I'll defy you to find an album that brings the fun back to rock n' roll with half the cajones as The New Gun.

My partner here at the Ripple, the Pope, has told me that Mardo slayed it when he saw them opening for King's X, which has now given me a new mission in life. Some day, we at the Ripple are going to form a record label of only the best damn rock bands on the planet and our very first act will be to round up the Mardo boys and take their funky-ass rock out on the road touring with The Thieves for a down-and-out garage rock freakout. Maybe, we'll give my thing a total workout and invite the Living Things to join in as well. There's three brothers in that band.

How much fricking fun would that be?