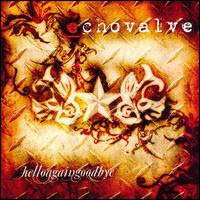 Sometimes, you've just got to go through hell and back to find out who you are.

The legend of the phoenix, while perhaps one of the most overused analogies in rock circles, is actually a truly powerful story. This mythical bird lives for 500 years, then as it prepares to die, it builds its own funeral pyre, is consumed by the flames, then rises anew from the ashes. This legend has become the epitome of describing the human ability to overcome hardship, to resurrect oneself in the face of adversity. To not only survive, but to thrive through near-death and emerge stronger on the other side.

All of which brings us to Echovalve.

Now, normally I wouldn't even mention aspects of a band's background in a review; what we really care about is what music they're capable of making now, not in the past. But with this raging four-piece from Atlanta, you gotta see where they came from in order to put the current moment in perspective. Not every band's history includes homelessness, living on the streets and drug problems so severe that one band member was declared clinically dead following an overdose (yes, Nikki Sixx, you're not the only one.) But while these problems would usually spell the end of a band, Echovalve used their past as fuel, a source of musical inspiration, to rise like that mythical phoenix from the ashes of their own self-destruction, now brimming with fire and passion and ready to unleash the monstrous beast of their music onto the world.

"Si Quieres," sets this beast loose, roaring vocals blaring through the massive bottom end of the riff. Quickly, however, you realize that this is no ordinary hard rock you're wrapping your ears around. As the riff breaks down to a staccato of individually picked notes, singer Mathieu Nevitt's vocals smooth to an exceptional Eddie Vedder/Scott Stapp-esque tone, still brimming with passion and the occasional gruff break out. Jay Langston's mastery of the guitar, through tone and texture is stunning, effortlessly whipping the song through moods of despair and anger. The rhythm section of Ryan Myers on bass and drummer Nick Randles feed the energy and emotion, like an engineer feeding coal into the fiery engine of a barreling train. "Si Quieres," in Spanish means if you want, and given the band's history, that intention is ominous. When Nevitt sings "Now I want to die," this isn't some emo teenage angst we're privy to. This is life-and-death, lost in the depths of anguish, the despair of the streets. With its sweeping chorus and soaring vocals, I defy you to find another metal song this passionate in its intensity.

And that's just the beginning. This is an unrelenting album in its energy and message. Each song follows suit, with brutal honesty, baring the soul of the band, through their pain, death and rebirth. Fierce neo-grunge rages through the first single, "Dirty Little Secret." Echoes of Pearl Jam and Soundgarden colliding with the earnestness of Creed, all done without the overblown pretense that could mire a band less proficient. "Loathe to Remember," hints at what lies at the heart of these guys, phenomenal musicianship, exacting precision in their riffery with the odd touch of near jazzy/prog passages and off time signatures. Not math rock by any means, but like Incubus or Mad at Gravity, they could be if they chose, their cohesiveness is that strong.

"You Don't Want Me Anymore," shows that the band isn't afraid to explore with textures, slower passages, near acoustic moments. Most impressively, in the hands of a lesser group, these songs might come across at best as maudlin or at worst as whiny. Not here. The passion is intense, the singing all encompassing, the lyrics devoid of cliche. This is a massive catharsis, both for band and listener. A purging reaffirmation of life. Just listen to "Anyone," and its naked lyric. "I am pitiful/I'm as weak as a flower to the ground/by your side/could you pick me up or hold me/til I die." You can see them whithering away.

After a solo acoustic guitar passage with vocal atmospherics, "Suffocate," displays Nevitt's finest singing, releasing his voice into that mythical fire as the riff rages underneath, setting it free.

Through all the fierce rock energy, the most impressive thing is that the boys never lose melody, that all important melody. In fact, the soaring choruses propel the songs forward. This is an amazingly well-crafted, heavy-hitting debut, brimming with more confidence than any band should be able to display on their first outing. While much will rightly be said of the band's past and message, what really matters is that these guys rock. Where the band go from here will be another beast of their own making, but wherever it is they deserve to be heard.

Clearly, just like our mythical Phoenix, what doesn't kill you makes you stronger and Echovalve are here to show you just how fucking strong the human spirit can be.

Racer....thank you for this great review of the CD! I got to rush out and buy it!!! Their myspace stuff sounds awesome!

Ahhhh finally, a review that I can agree with..thank you! Listening to Echovalve is like skinny dippin for the first time! It's very refreshing ;) Seriously they effin ROCK!!! Love them!!!!!!!!!!!!!

These boys really are as great as you describe. The depth and strength of Mathieu's voice demand recognition. He is an amazing talent. Jay, Ryan and Nick are just as talented with a severe splash of spunky entertainment. These guys never cease to amaze me with their engaging shows and now this awesome album. Look out world, here comes the musical perfection that is ECHOVALVE!