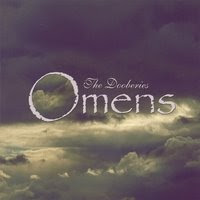 Life’s been a bit rough of late. In retrospect, I’ve got things pretty good. I don’t live in a mud hut in the middle of a desert being fought over by avocado overlords, so I’ve got that going for me. However, there have been quite a few extracurricular events going on that have just made opening my eyes in the morning that much more difficult. The Angels’ “Face the Day” immediately comes to mind. Sure . . . I could have the attitude of ‘that which doesn’t kill me, only delays the inevitable’, but anyone who knows me knows that I’ll find other ways to get by. And, if I don’t find that magical way of getting by, then something generally finds me instead. That’s the case with The Dooberies.
In the midst of an off the hook, mad capped day of dealing with ugly personalities and unreasonable attitudes, Omens arrived from jolly ole England inconspicuously packaged in a plain brown wrapper. I slid the gleaming slab of plastic into my cars CD player and immediately felt as if the troubles of the day were being picked from my aura by delicate, nimble, and loving fingers. Head Doobie guru, Georgie Butt, leads off the disc by singing about the pitfalls of consumerism, industrialism, and technology in a terribly poignant tune called “Progress.” I’m instantly reminded of Cat Stevens as he sang “Where Will the Children Play?” By the end of the song, I find myself questioning the way I live life, and for that I thank Georgie. What incredible power it must be to make someone stop and think!
The music throughout Omens is acoustic based, quasi-hippie, folk rock with heavy harmonica accents. Add a touch of down home blues, a pinch of rock, and a dry pass of bluegrass and blend for forty-five minutes. That, my friends is what you’ll get with The Dooberies. Georgie’s voice, at times, reminds me of the more laid back moments of Natalie Merchant, while the music takes me back to some of the finest music from the ‘60’s and ‘70’s. I’m sorry. Did I forget to mention that The Dooberies are a female fronted project? My bad. “This is Me” has a bit of a boogie vibe to it and has Georgie begging us to simply accept her for who she is . . . an honest music lover and heart felt singer / songwriter. “Climb to the Heights” touches the recent emotional turmoil that I’ve been feeling, leaves me feeling uplifted, and inspires me to shrug off the baggage of this material world and reflect on my inner self. Magical!
Peace and harmony are the theme for “Hey Hey” and we’re treated to some beautiful guitar work . . . almost has a jazzy feel to it. Love the line “even rich men can be poor.” Gets ya’ back to that whole thinking thing. Seriously woman . . . what power is this that you possess? “Wastin’ My Time” is tinged with a reggae feel and incorporates some great interplay between guitars and bass. The acoustic guitar flourishes after the choruses are well placed and have me unconsciously reaching for my drink with the tacky umbrella. Of course, there’s no drink with an umbrella. Hell . . . there’s no drink at all!
Along with “Progress”, “Freedom” is my favorite tune on Omens. I’m usually a fan of compelling social commentary, especially when it’s done this well, and this song is no different. It’s one of those special moments where heart felt lyrics, music, and voice work in perfect harmony to sell the song. Being a debut album, I’m encouraged for the future of The Dooberies. If they can learn from the mistakes on this disc, the future will be endless for Georgie and her crew. The song writing is there. The songs are good. Some of them are damn good. And, with Georgie’s angelic touch, I’m a convert.
I do suggest you listen to Omens on headphones simply because of the nuances within the music that seems to get lost otherwise. I also suggest listening to it after a piss poor day at the office in hopes that it will lift your spirit. And, if for some reason it doesn’t, feel free to abide by the words that Racer and I seem to live by. At the end of the day . . . there’s always alcohol. - Pope JTE
www.myspace.com/thedooberies
thedooberies.com