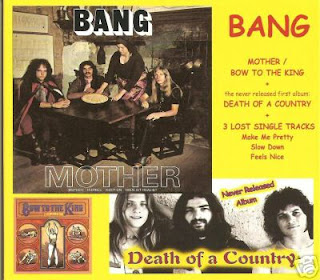 Previously, (see Budgie review) I'd written in these pages about that heady time during the late 60's to early 70's when heavy metal crawled out of the muck and mire of the Vietnam war letdown and belched its bile of heavy blues-based rock onto an unsuspecting world. In regular (monthly?) installments, we're going to take an aural microscope to that period of proto-metal (roughly 1968 to 1973), dig through the skeletal remains of the bands lost to poor management, distribution and record company apathy, and find the plethora of treasures buried under the undiscerning ear of history.

To start this series off, then, the first rapturous disc popped onto the CD player is from this mad trio from Phili, Bang. Bang's crazed ascent up the ranks of proto-metal pioneers is near-legendary among the underground circles. Story has it that the Bang boys were in , trying unsuccessfully to scrap together a music career. Having scored some weed on the Boardwalk, they walked to a local music store to buy some rolling papers when they noted a sign advertising a Battle of Bands. Asking the store manager if they could join, the manager mockingly pointed out that the contest was last week and sarcastically suggested that they go over to and open up for Rod Stewart. Armed with their gear, papers, bag of pot and a hefty set of balls, Bang took his "get-the-fuck-out-of-my-store" suggestion to heart, headed to , somehow tracked down Rod Stewart's manager, somehow convinced him to let them set up and somehow got him to listen to their set. And it worked! From out of nowhere, Bang's first real gig was opening up that night for Rod Stewart & the Faces, Deep Purple and Southern Comfort!

From there, the music did the rest, and this is where the story concerns you, oh loyal lover of all things seventies and heavy. Bang produced a series of albums for Capitol that deserves to be heard today. Using a basic power-trio line-up of drums, bass and guitar, the boys managed to avoid sounding anything like Cream and instead fused a love of early Sabbath with a slightly bluesy-folkish twist of Zepplin into a wholly satisfying stew of proto-metal.

Mother/Bow to the King was reissued in 2007 by Green Tree Records, an awesome purveyor of 60's and 70's rock reissues (www.numusi.de). This set combines two four-song EP's onto one disc and throws in three lost singles from the same time period. To cap it off, adding an abundance of riches for your hard-earned proto-metal dollar, Bang's entire first unreleased album, Death of a Country is thrown into the mix. A freaking gluttony of proto-metal on one disc.

So what's it sound like? "Mother" kicks the whole thing off as a perfect example of the birth of proto-metal. Coming from the folky, psychedelic sixties, metal was the music of disillusionment, anxiety and anger. "Mother" starts off with a catchy acoustic passage, sounding very sixties in its peace-and-love vibe. The vocals, a great cross between Ozzy and Robert Plant (kind of a pre-dating of Axl Rose) hangs onto that sixties idealism, until you suddenly realize what they boys are singing about. "Mother/you've been good to me/Mother/kept me from what I shouldn't see/taught me life was sweet and grand/told me goodness came from man/Mother/ you lied to me." Then the detuned guitar kicks in, launching the song into a heavy tirade about the state of American society in the early seventies. There could be no better capsule to so aptly define the death of the hippy, than this statement.

And the disc doesn't let up from there. "Humble," after it's folky intro, rages with a riff as heavy as anything Sabbath turned out and a vocal phrasing eerily reminiscent of Ozzy without being derivative. "Keep On," skips the folk altogether, shooting off with a scratchy wah-wah style riff, before dropping into a heavy bottom ended groover. "Idealist/Realist," finishes off this first portion of the disc, the original Mother EP, with another barnburner, making you wonder just why you've never heard of these cats before.

Actually, one thing that's readily apparent on listening to the disc is that somehow, everything sounds vaguely familiar. And that my friend is meant to be a compliment, not an insult. When you consider that Bang were banging out this heavy groove way back in 1971, it makes you realize just how much these guys influenced a whole generation of rockers later in the seventies and into the eighties.

Now the disc is too long to review each track, but let it rest that the Bow to the King EP is just as polished and fierce, while the three singles rock harder than the first Kiss record which followed a full-year later and makes you wonder why Bang didn't become a household name years ahead of bands like Blue Oyster Cult or Ted Nugent. The Death of a Country album is a great addition from a historical aspect. Recorded in 1971 it encompasses a more psychedelic sound as the band were just trying to figure out their metal chops but that's not to say that there aren't some heavy passages or accomplished songs. Having said that, it's easy to see why the disc was never released. The album is credited as being produced by Ron and Howie Albert, but what it really needed was an editor, most of the songs wandering off into a dime-bag of marijuana fumes long past their expiration date. But isn't that what makes the proto-metal scene so much fun. It's the sound of change, of the old dying and the new being born in a fit of anger. Listening to this portion of the disc keys you into that musical shift as it overtook a generation.

Mother/Bow to the King is an essential addition to any self-respecting proto-metal library and still sounds fricking vibrant today. Pop it into your player and dig on that crazy proto-metal vibe, back when rock was a fresh statement, an angry protest, and everything was just a little bit better with a dimebag scored on the Boardwalk.

Buy here: Bang-Mother/Bow to the King