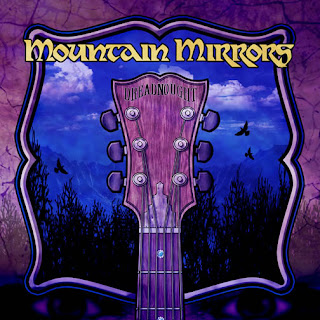 For months, I’ve been pacing around my house like an expectant father. I kept looking to the calendar to make sure I had the due date written down correctly. I’ve chewed my lower lip to pulp. I’ve even gone as far as building new furniture in expectation of the new arrival to the household. I’m not really expecting a baby, mind you, but the anticipation I’ve been feeling has got to be relatively close. Dreadnought is coming! Dreadnought is coming!

A few months ago, I introduced some of you to the ever so talented Jeff Sanders and his heavy acoustic musical project, Mountain Mirrors. If you can’t remember . . . shame on you and go back to the archives (over there on the right side of the screen . . . go ahead, it’s okay to peruse) and reacquaint yourself to the brilliance. To summarize, the self titled Mountain Mirrors album is a dark, multi-layered masterpiece of sonic soundscape. Well, the follow up, Dreadnought, is all that and so much more.

What we’ve come to expect from Jeff is acoustic guitar driven brooding music, but from the opening strains of “Born Deranged” one gets the sense that there’s something strange afoot at the Circle K. It’s a bit . . . peppier? Nah. That can’t be it. Bare with me . . . we’ll figure this out together. The tune opens the disc with a Days of the New type guitar riff, all the while being surrounded by a distorted and droning bass line, humming Hammond organ, and Bonham-esque drumming. The tune isn’t so much brooding as much as rocking, but not just meathead rocking but prog-like rocking. A little surprising, but very much welcome. “Field of Grass” follows by trudging across dusty plains traversed by few before. That distorted bass carries the tune in a retro, fuzzed out way. A little psychedelic, but heavy in an Imogene kind of way. Jeff’s vocals take on a whole new quality unlike anything he had done on the self titled disc. Notably, that acoustic guitar isn’t ringing through and is replaced with an electric that has as much tone as you would find on any classic ‘70’s album. The guitar solos are fantastic, melodic adventures. “I Don’t Belong” has that classic acoustic strumming away and the melody is awash with Jeff’s crooning voice. But, it’s the piano work that separates this song from sounding one dimensional.

“End of Days” is a textural masterpiece. Heavy groovin’ acoustic guitars flow to beautifully strummed passages, while the vocals soar a melody of their own. The tune features great dynamic breaks and introduces a smattering of synth and vocal harmonies to add a bit of color. The break at 3:21 just hits a nerve and damn near breaks me down. Almost like being taken back to a simpler time when life wasn’t so demanding. Simply put, it’s a great song.

After a brief interlude with “The Elemental”, Jeff slays it with the instrumental, “Your Dirge.” Bloody heavy track for an acoustic guitar carrying the weight of the track. Masterful. “Birds in a Rat Race” is a sorrowful tune filled with the desperation of escape. More beautiful guitar work and synthesized texture make this song a memorable one. “Better Days” is like going back in time to the day Zepplin III was released.

“A Spell to Block” is a spooky and dark tale. This is a personal favorite simply because of the songs dynamics. Great guitar work, especially when you listen to it in headphones. Jeff does a great job of shifting the guitar runs from one ear to the next, and then drops some more of that stunning electric tone on us. Finally, the piano driven “Angelic” sees the end of the disc with an emotionally filled tune of hope and love. It’s a stirring end to an all around solid disc.

The most stunning aspect of this album is how much musical growth there is since the last disc. And maybe that musical growth is what we were looking for instead of the earlier statement of peppier. The songs may be shorter, but they’re more focused and more concise. The musicianship shows brighter than on the self titled release through musical shadows and light, and the overall mood is less hazy. An excellent effort worthy of your hard earned dollars. Pick up Dreadnought over at Magnatunes.com and meet me and Jeff in the delivery ward . . . there’s a cigar waiting for you. - Pope JTE

Posted by The Ripple Effect at 8:32 AM

This stuff is dark and creepy...i love it!