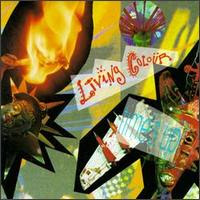 Living Colour was too brave to fail. And the second album is usually where most groups fail. Following up Vivid, with "Cult of Personality" still in heavy rotation and a new multiculturalism in place at MTV, Living Colour took off, creating Times Up, one of the most wide-ranging albums that had been put out in that decade. Bravely, perhaps foolishly, the band didn’t stint on any one part of its legacy, but ventured forth in all the genres apparent on Vivid: rock, thrash, rap, funk and the power ballad, while adding experimental pieces that harkened back to Vernon Reid’s time in the avant-garde Decoding Society and soca into the musical mix. It’s a heady album, one that challenges the listener with its sheer breadth.

Time’s Up opens the album, 3 minutes of intricately played thrash that smashes Bad Brains up against Rush and sees what comes out the other end. "Pride" pisses on the ground and announces their intentions: “this is our music, so why shouldn’t we play it?” in reaction to the oddity of a black rock band. And play it they do. S"omeone Like You" is a menacing meditation of crack cocaine and the streets of , and "New Jack Theme" swirls around around in a fury of guitar and drums and bass like a patrol car’s red light. "I make more money than a judge or a cop, give me a reason why I should stop." The press labeled them “Black Zeppelin” for the fury of their assault. Calhoun’s drumming is astounding, Reid’s guitar is almost more textural than full on rock and Skilling’s bass alternates between a counter statement to the main theme and a separate, supporting riff.

But for all the noise, the band never loses its sense of humor. "Love Rears its Ugly Head" visits that horror of finding true love, "Elvis is Dead" takes the sacred cow and blows is the skeleton complete with a great Little Richard rap in the middle. I mean, damn, Little Richard? How cool is that? Even in the cautionary tale of love in the time of Aids, "Under Cover of Darkness", has the sweetness of a rap by Queen Latifah in the bridge.

The last two songs, "Solace of You" combine the sweet and sour of the Living Colour world. Set to a soca beat blown in by a breeze, the beauty of the melody is a counterpoint to the lyrics about the entire generation of Disappeared men from . "This is the Life" grounds us into remembering that we have this life, good or bad, and we have to make the best of it. It’s a sobering message in an album that has spent the better part of a hour covering as much of life as it can, musically and lyrically.

Posted by The Ripple Effect at 3:35 AM