Tegan and Sara - So Jealous 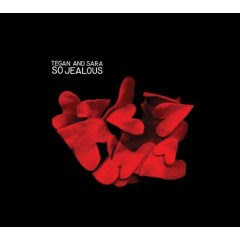 In our effort to bring you, our loyal readers, only the very best in undiscovered music, we spare no expense, traveling the world for that special sound that for one reason or another hasn't gotten the vibe it deserves here in the States. In that quest, I've been to record stores from Tibet to Turkey, Hong Kong to Hungary, all to spare you the trouble. For today's review, however, we're not going any place quite that exotic, just a few hours north of the border to Calgary, the home of this bopping set of folk-punk twins, Tegan and Sara.

Now, in all honesty, I gotta be fair. I didn't discover this little gem, my wife did (now and forever after to be known as Mrs Racer.) There we were in Victoria doing of all things, CD shopping. I was digging through some of my lost 7o's Canadian bands like Prism (ultimately disappointing), Chilliwack (didn't buy it) and Max Webster (still a freakishly interesting band, review to follow.) As I was about ready to depart with my bounty of loot, my beautiful Mrs. Racer pointed upwards towards the store's installed speakers and in her most pleasant, you're-not-buying-those-unless-I-get-something voice said, "I want this." As such, So Jealous made it's way into our purchase cart.

And I couldn't be happier that it did. Tegan and Sara combine a love of punk with the heart of a couple of folksters, a smattering of pop smarts and babydoll-in-the-midst-of-a-nervous-breakdown vocals into a vibrant, accessible yet ultimately quirky sound. They're not punk, but they're punky. They're not riot grrrl, but they rock. They're not pop, but they're poppy. And even though they've toured Lilith Fair with Sarah McLachlan, they're far too indie to be called folk. For lack of a better term, let's call them agit-pop, quirk-rock, or angst-folk. See if any of those stick.

Whatever you call them, words are just words, in the end what matters is the music, and Tegan and Sara got chops in spades. The clear winner on this 2004 release is "Walking With a Ghost," which starts off with a beautifully clean acoustic guitar strumming out the opening chords, before the tight harmony vocals squeak across the top. Thirty seconds in, a beautiful sparse drum riff trips across leading right into the bass and layered synth. The melody is simple, the arrangement sparse, and the effect is beautiful.

"Speak Slow," is Mrs Racer's favorite and it's hard to argue with that . Starting with a very accessible, indie rock guitar/synth intro, the sister's leap into a punky/pop rave up guaranteed to get the crowd bopping. Mrs Racer was mouthing the emotive vocal quirks for days after listening to the song.

Lyrically, the twins explore their own nervous anxieties in love, self-image and loathing. "You Wouldn't Like Me," contains the gem of a lyric "I feel like I wouldn't like me, if I met me," while the incessant guitar ups the anxiety level without ever losing it's pop hooks. Other tracks like "Take Me Anywhere," and "Wake up Exhausted," show off the girls individuality, creating catchy hooks in the pop-punk vein without ever sounding like Letters to Cleo or any number of the relatively faceless female-led bands that emerged in the late 1990's.

In the end, Tegan and Sara produce bright, bouncy pop-tunes that explore their own world of neuroses, fears that are truly universal. Other than the dirge-like title track, the songs are never a downer, even in the midst of the breakdown. I gotta hand it to the Mrs, she swung hard and knocked this one clear outta the park. But then, I should've expected that. As any married guy knows, the Mrs is always right.

Posted by The Ripple Effect at 6:36 AM