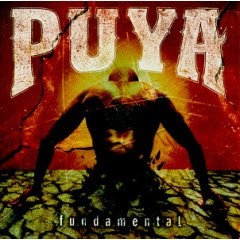 Heavy metal, despite all of its abrasiveness, rawness and power, isn't always a genre extremely open to innovation. Let's face it, the basic blueprint established by Black Sabbath with their debut album in the 70's still holds true today. Dark mystical, quasi-evil lyrics delivered over thunderous beats and mastadon-sized detuned power chords. Sure, every once in a while a new trend will emerge giving us the annoyance of rap-metal or the bombastic grandeur of symphonic metal, but really, when was the last time you heard something truly different. Say something, that could keep your head banging while simultaneously getting your hips to sway and your ass to groove.

Journey with me in our way-back machine to the glorious year of 1999. Nu-metal and rap-metal ruled as Limp Biscuit, Korn and Rage Against the Machine dominated the charts. Over in the pop arena, Ricky Martin and Enrique Inglesias held reign over the charts as the Latin fad gained steam on the back of "Living La Vida Loca." Rock en Espanol, previously ignored by American radio like an ugly stepchild with leprosy, suddenly began to make some inroads. It was in this climate of musical melting pot that Puya emerged.

Big in their native homeland of Puerto Rico, Puya couldn't buy a record deal for American distribution until the stars aligned just right under the Rock en Espanol/nu-metal constellation. And let's all give a mighty "praise Jah," that they did, because Puya's American debut, Fundamental is a devastating monster of an album.

Fusing nu-metal crunch, with rap-style vocals may not seem innovative, but throw in the pulsing latin groves, the occasional full-out Salsa breaks, ass-shaking polyrhythms and the occasional Flamenco horn section, stir it all up, season it with a hint of hip hop and spanish lyrics and what you get is a glorious stew of Latin metal, Puerto Rican salsa-core. A concoction never yet repeated with such verve, musicianship and panache.

Yes, I said it. When was the last time you heard words like panache used to describe a metal album? Don't worry, Puya still rock brutally heavy, beating Godsmack at their own game for riffs, but it's all textured with a decidedly flamenco flair.

"Oasis," sets us off on our journey with a crunching nu-metal riff capable of immediately sending the masses into a whiplash-inducing attack of head-banging. But there is nothing to bely the true majesty to come until the 29 second mark when suddenly the brutally abrasive riff transforms into a full-on salsa break, highlighted by polyrthyhms, congas, funky bass and jazzy guitar chords. But don't worry those of you who want to rock, you haven't bought the wrong record. One minute 22 seconds in, Puya storm back into the crunch followed with a massive guitar break. Don't even let it bother you that half the lyrics are sung in Spanish. When you hear the second half of the verse sung in English you quickly realize that the language is absolutely unimportant. All that matters is that these guys can rock.

The next track "Fake," is a full-out nu-metal terror which leads right into the title tune, "Fundamental," a Latin rock masterpiece, played over a massive salsa beat, complete with horns and funk, until it literally explodes into one of the heaviest metal passages of 1999. Limp Biscuit couldn't gather up these kind of riffs if they were handed to them in a paper bag. From there the song descends into a massive deluge of surging horns, screaming guitars and feedback, before breaking right back to the Latin funk. If this doesn't get your heart pounding, my friend, I've got the number of a good cardiologist I'd be happy to send to you.

"Whatever," brims out of the speakers, all War-era "Lowrider," funk, half espanol, half-english. It may take some a while to get used to horns on their heavy metal record, but give this song a sample, and see if you don't just want to roll down your windows and cruise with this pulsing out of your stereo. "Keep it Simple," follows the same lowrider vein before "Sal Pa' Fuera," kicks in a Sabbath-worthy riff, reminding us that, regardless of country of origin, the basic lessons of metal are universal. "Trinidad," may be my favorite track as it fully merges the driving metal with the salsa rhythms throughout the whole track, not breaking from one to the next. And it is impressive, how heavy a salsa beat can be when crunching guitars are layered on top of the thudding bass and horns.

Certainly, Puya may not be for everyone. First, you have to be open to a new sound other than the wailing of a dismembered corpse in your metal. And second, you have to get past the fact that you don't need to understand the language of the lyric to fall in love with its drive, passion and intent. Once those two minor roadblocks are passed, Puya awaits to carry you off to a side of Puerto Rico that's heavier than you ever imagined.