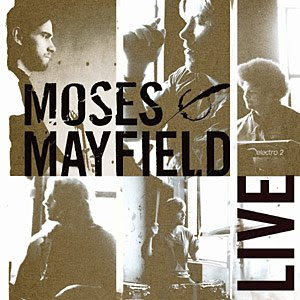 Have you ever reached into your closet on a cold winter's day, grabbed your favorite jacket off the hanger, stuck your hand into the pocket and discovered a $20 bill? It's a cool little feeling. Not that $20 bucks will change your life, but hey, it's always damn fun finding that little buried treasure lost amongst the lint and rolled up movie theater receipts. Moses Mayfield is just like that. By itself, it won't change your life, but damn, it's a cool little find just the same.

Over here at the grand offices of The Ripple Effect, one of our favorite pastimes is to peruse all the independent record stores we can find and dig through their discount bins. While we'll often spend hours weeding through utter crap, more often than not, we'll walk out with one or two discs that are labeled the FINDS of our trip. The Pope JTE already wrote of one of his earlier finds, the Popealopes. For today, however, we're going to concentrate on this nifty little find, Moses Mayfield.

Knowing absolutely nothing of the band, I picked it out of the bin simply because it was recorded live, and the popester and I are suckers for live music. Nothing reveals the capabilities or limitations of a band more than a live recording. So, not knowing what to expect, I slipped this disc into the player, and was very pleasantly surprised.

First of all, Moses Mayfield is a band, not a person, a five-piece outfit from Birmingham, Alabama that is, and the first thing you notice is that they're local favorites. "Control" starts off the disc with an enthusiastic response from the home crowd who've obviously followed these guys for years. A shimmering guitar riff sparks off the affair before Matthew Mayfield's gruff baritone kicks in. After a slow acoustic verse, the shimmering guitar returns for a charging chorus, revealing a tight band, clearly feeding off of each other and having fun in the live element.
Moses Mayfield play an ernest, rootsy blend of rock with jam band overtones and a smattering of southern accents. Most of these tunes carry a moody ambience to them, never blasting off into orbit, but hanging onto a thin stratosphere of melancholy. The musicianship is strong throughout, never showy or flashy, but clearly the work of a crew of competent guys. "Fall Behind," the second cut is probably a song that received some local radio play, or at least should have. With strummed acoustics, Byrd's-esque twanging guitars and a brooding tone, I'm reminded of Seven Mary Three or Sister Hazel, when either band is playing at it's peak.

The crowd obviously loves "Element," a slower, brooding ballad, but I prefer the dynamism and energy of "Strange New Place," which shows the band taking root in their Gov't Mule/Allman Brothers best. With stuttering guitars and scratching riffs, the boys let loose, proving they can blast out a bluesy southern rocker as well as any one else on the jam band circuit. I'm sure live, it's a killer. Check out the video below to get a sample, but be patient or skip past the prolonged "Swing Low," intro. It takes a while but the guts of the song come blowing through.

I've learned that the band have gone on to release their major label debut for Epic, The Inside, but I haven't seen a copy of it yet. Perhaps, I'll track it down for a future review. In the meantime, all four tracks from the Live EP have already made the grade, downloaded from the disc onto my itunes and ipod. A nice little treasure, now integrated into the ones and zeros of my life. Like that loose $20, my life hasn't been changed, but it's just a slightly happier place.

Posted by The Ripple Effect at 3:10 PM