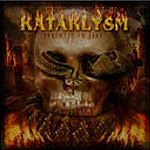 Beware, Oh Loyal Readers! I’m about to introduce you to an album so sonically brutal that, by the end of your first listen, you’ll either be hating me for subjecting your ears to such a, pardon the pun, cataclysmic sound, or praising me for being the pariah that I am. Oh yeah, baby.

Those of you who know me, know that I love it when my metal offers me something more than just pure aggression, speed, and heaviness. There’s gotta’ be that dynamism. That integrity. That overall “we know what we’re doing coz’ we just fucking do, and if you question us, well . . . we’ll punch your mom in the face” attitude infused in those sounds. Let’s face it . . . anybody can play fast, or heavy, or whatever. The defining moment comes when that someone can piece all of those elements together, create their own sound, and shock the most jaded listener into submission.

Yep . . . that jaded listener would be me, folks. Hey . . . I listen to a lot of metal, and man, let me tell you. I’ve subjected my ears to some really bad music (it’s not just for me, friends. I do this for you), so it’s always relieving when a band steps up, hurls a big fat middle finger at the establishment, and does something for themselves, and . . . Kataklysm do it well!

Don’t pick up this album expecting anything remotely resembling mellow. There are no power ballads. There are no sappy love songs. From the opening barrage of “Ambassador of Pain” through the last strains of “Under the Bleeding Sun”, we’re exposed to the phenomenon known as Northern Hyperblast. Blistering speed metal set up perfectly by grinding, riff driven mid-tempo thrash. Vocals that range from a guttural diaphragm wrenching bark to a hair raising demonic screech. Perfectly toned guitars creating a wall of sound, ducking, dodging, and weaving through the last remaining spaces of silence. Bubbling in pure grind fashion, bass guitars creating a wave a mile high and a lifetime broad. But, don’t think that Serenity in Fire is pure sound all the way through. Remember . . . this is my kind of metal. There’s space between the notes. There are breaks in the groove. Dynamics unparalleled.

I would say the song that best defines Kataklysm is “For All Our Sins”. A little melodic guitar groove woven in between the split personalities of the vocals and the mind bending drum work, and then a torso-torquing riff at the 4:26 mark that is impossible to sit still through. “As I Slither” and the title track are the most accessible tracks, only in that they’re more of the mid tempo variety, but don’t for a minute think that that these tracks are any softer than any of the others. The bludgeoning is just as vicious, maybe just a bit more premeditated. Don’t believe me? Wait until “Blood on the Swans” kicks in. The tune opens with a massive double bass, snare drum assault that has one thinking that they’re being riddled with bullets. But, my absolute favorite tune on the album is “10 Seconds From the End”. Great opening riff. Great dynamics. Great vocals. Fuck . . . just a great metal song!

One aspect of Serenity in Fire that caught my attention was the production value brought on by guitarist Jean-Francois Dagenais. One would think that with the absolute musical bedlam on this disc that the instruments would be muddied up, but far from it. All of the instruments stand on their own while working together to push the songs forward. Exceptional work!

I’ve been saying it for awhile now, and it probably bears repeating. Some of the best music is coming out of two countries: Sweden and Canada. Maybe there’s some direct correlation with extreme music and cold weather . . . I don’t know. In the way of the whole extreme metal genre, Kataklysm have the market cornered out of Canada, and I dare anyone to listen to Serenity in Fire and tell the band that they’re not all that and a bag of Moose Munch. - Pope JTE