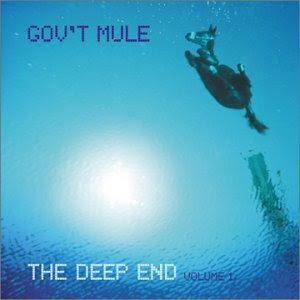 Music so real you can taste the stale beer.

And the peanuts. Hell . . . if you strain your nostrils real hard like, you may even get that whiff of the perspiration so prevalent with the road wary musician . . . and, God forbid, you may even taste that as well.

Today we turn to the jukebox, plug in D2 and let rip a few tracks of classic rock and roll that play as if the synthesizer was never invented, and the gods of Fender and Gibson were still smiling down on all-tube amps. Guitarist / vocalist Warren Haynes and rock music’s most underrated drummer, Matt Abts did the brave thing and carried on with the good name of Gov’t Mule after the untimely death of bassist Allen Woody. Rather than call it a day, they decided to go back into the studio and pay homage to their fallen comrade with a collection of great (or soon to be great) tunes by enlisting the aid of a multitude of talented musicians who had yet to pay their last respects.

"Fools Gold" warms us up with a Jack Bruce-esque vocal, kind of like butter melting on a hot biscuit, Warren Haynes’ voice is pure comfort. In fact, there are a number of points on this disc where Warren’s voice is so inspired and soulful that one could get behind the idea of a higher spirit lending it’s strength to convey his emotion. Check out “Banks of the Deep End”, “Soulshine”, and “Worried Down With the Blues” as just a few examples. The second track, "Life on the Outside," is a killer, beginning with a great Hendrix style guitar vamp and sending the chorus home with some serious harmonies and thundering drums. Flea lends a quiet touch, not something he is usually known for, to "Down and Out in New York City" with its bell-bottomed-superfly polyester vibe.

"Effigy" covers my favorite ignored Credence Clearwater Revival song (hidden on the back of Willie and Poor Boys for those who care) and breaks it into full-on jam territory for the last couple minutes, while losing none of the power and menace of the song. Fogerty’s songwriting stands the test of time. The instrumental “Sco-Mule” incorporates the jazzy tones of guitarist John Scofield, who lends an impassioned performance for this tribute. “Beautifully Broken” always brings a tear to the eye, again brought on by Warrens earthy vocals. The final track, done with original bassist Allen Woody, sounds like a one take sound check, and for that its loose and powerful, not at all self conscience or polished. As close to an official bootleg as you’ll find on the original release, methinks.

Gov’t Mule didn’t so much rise from the ashes of the Allman Brothers band, considering that the Allmans are still together and doing there thing, minus Dickey Betts of course. The Mule have acted more as an extension of the Allman Brothers. The Deep End, Vols. 1 & 2 are solid albums that fill the void of recorded works as the band worked to figure out which direction they were going to go. After all, carrying on after the loss of not just a band mate but a family member is a slippery slope. Carry on with a replacement who doesn’t have the same musical integrity could doom the band. Warren and Matt had to be certain that their footing was sure before they continued their musical odyssey, and their decision to hire on Andy Hess (bass) and Danny Louis (keyboards) seem to have been wise choices. Three albums later, one could say The Mule have risen from the deep end (yeah . . . that pun was intended.)

Special Thanks to Heidi Silverberg for the hook-up.