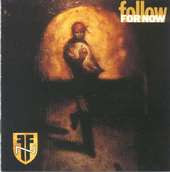 Back in 1991, I was this weird little skinny dude with thick black framed glasses and a bad hair cut. You know the old saying about not getting laid in a whorehouse with a fistful of twenties? Yeah. That was me. But all was not lost, friends. Somewhere wrapped up in that awkward adolescent freakshow was a dude who had a sense for good tunes, and now I’m here for you. Allow me to introduce to you, Follow For Now.
Follow For Now popped out of the Atlanta scene at the same time I was going through that awkward stage of life, and looked to be the band that would fill the void between Living Color and Fishbone. Their self entitled debut album had a lot of the elements that we hear in the aforementioned bands, however, they weren’t as commercially successful as Living Color (though they should have been), and no where near as spastic as Fishbone. Follow For Now incorporated blues rock with R&B, funk, hip hop, a little psychedelia, and a hint of metal to keep the mosh happy kids, well . . . happy. The eclectic mix of influences is both a blessing and a curse. On one hand, it makes it difficult to find that niche market to keep the band happy and around for years to come. On the other, it’s what makes the music feel fresh after fifteen years of shelf life.
“Holy Moses” opens the disc with a funky blues rocker. Up tempo and a great attention getter to start things off. The band easily slides into a more funked out groove that ebbs and flows with “Temptation”, and the bass work at the solo break will inevitably have you gyrating. You’re allowed to gyrate. Go ahead. Enjoy yourself. “Mistreatin’ Folks” is a pretty standard slow blues burner that will have your reaching for your sunglasses even though you’re inside a darkened room. As you’re feeling all mellow and what not, Follow For Now shift gears and attack a Public Enemy classic in “She Watch Channel Zero”. Complete with the Slayer riff of “Angel of Death”, the boys deliver a great rendition of the tune. The vocals may be a bit to high in the mix, but it’s a minor flaw. Then, they slow things down again with “Time”, which I just noticed was produced by Brendan O’Brien. Huh . . . who knew? It’s actually one of the better songs on the album with guitarist / vocalist David Ryan Harris’ impassioned vocals highlighting the track.
After a brief psychedelic interlude with “Fire n’ Snakes”, the boys kick it into high gear and tell us to break the cycles that are keeping us in the ruts with “Evil Wheel”. Up tempo and funky, we bop through two and a half minutes of Fishbone-esque groove until we’re dropped on our collective ass to a slowed down bluesy piece entitled “Ms. Fortune”. We’re then served up another funked out rocker, this time with a social conscious in “White Hood”. Follow For Now wrap up the disc with “Milkbone”, a funked out metal tune with rapped lyrics, showing that they weren’t just pioneers in the black rock movement of the late ‘80’s / early ‘90’s, they were also instrumental in the whole rap rock movement that inundated the music industry several years later.

A casualty of their own musical vibrancy, Follow For Now couldn’t keep the inner workings of the band on the same page and ultimately disbanded before they could ever get in the studio for a follow up. It’s a damn shame, really. As far a debut albums go, this one’s got a lot going for it. There’s an immediacy to it and mixed in with the funk vibes, there’s a message or two. Life altering album? Probably not . . . but there’s so much musicality to it that, much like my adolescent appearance, it’s not easy to ignore. - Pope JTE