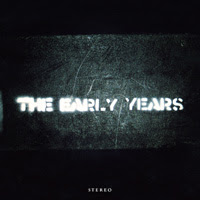 I need to start off this review with one very important statement: I don't like noise rock. To me, music is always based in melody. Show me the groove, bring in the bass along with a memorable chorus, lyrics that aren't insipid and I'm happy. Noise Rock, feedback used for the sake of using feedback or atonal, non-melodic din passes me by as migraine-inducing, unintelligible noise. Washing mediocre songs in layers of white noise feedback just doesn't make those songs any better.

Now, with that foundation laid, you may ask why in the world I like The Early Years debut so much. And the answer is simple; they're mesmerizing.

The Early Years started off when David Malkinson, testing the waters for ambient noise, decided to pull off a solo gig, armed with only an electric guitar, an amp and a slew of effect pedals. From there, adding a guitarist with a love of garage-rock feedback and a drummer infatuated with the krautrock beat of early Neu!, Can and Tortoise, The Early Years were born, and the results are simply out of this world.

Primarily, these guys haven't forgotten melody as the cornerstone of their sonic experiments. And experimental it is. The Early Years unleash a seemingly incongruous blend of ambient mood drenched in feedback and pedal effects noise, underpinned by galloping bass lines and monotone vocals. The overall effect is a startlingly fresh contradiction in textures, a grand majesty of noise, yet it's never noisy. A cacophony of sound that is still structured and vibrant, moody and intense. This is space rock in the truest sense of the term. Simply put, The Early Years music is sublime with balls.

The Early Years is all about texture; dense atmospherics, strata of sound, carefully applied, one on top of the next, layer after layer, as a painter adds her oils to a canvass. "All Ones and Zeros," sets the stage beautifully. Beginning with a bass guitar line very reminiscent of early New Order or Joy Division, the tones get layered on top, slowly, methodically. First, the shock of a feedback guitar chord, followed by effect-dripping guitar notes building to a stuttering crescendo, all propelled forward by that insistent Teutonic drumming. By the time the vocal layers on top, the song has already left the stratosphere, circling somewhere around Alpha Centuri, dipping in and out of celestial black holes and brown dwarfs.

The “Simple Solution” and "So Far Gone," follow similar flight plans, elevating off the launch pad amid a sulfurous exhaust of feedback effects. But again, the key point, what grounds this montage of sound back here on terra firma, is the band’s recognition of melody, both in the vocal lines and the shimmering guitars that drift through “Simple Solution,” like comets streaking across the night sky. Mesmerizingly beautiful.

As complex as my descriptions of the music may sound, the truth is that The Early Years never drift away from accessible, beautiful pop. The closest I can come in describing them is to imagine a more ambient Joy Division without the despair, a more tuneful Cocteau Twins or Sigur Ros with a pulse. While those points of reference may still keep you scratching your head in ponder, it’s as good a place as any to start.

Actually, the best place would be to simply purchase a ticket to ride on their spaceship, the debut The Early Years, and strap yourself in as the layers of ambient tones carry you off on a beautiful ride through the space rock atmosphere. Leave gravity at home, it isn’t needed on this flight.—Racer X

Posted by The Ripple Effect at 4:19 PM

Thanks for the review! This kind of stuff is right up my alley! What a great sounding bamnd!