Prong - Power of the Damager 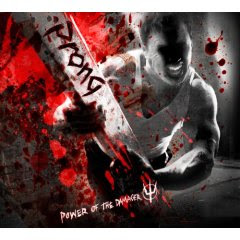 There was a time when I felt that Prong was the most important metal band devastating my ear drums. This was around ’90 – ’91 and Prove Your Wrong had taken up permanent residence in my CD player, and in comparison to most of the music being released at that time, the competition could only hope to bag Prong’s groceries. Fast forward to 2007, look at the gray creeping into my facial hair, and take a listen to what band founder, Tommy Victor, has delivered us! I was ready to claim this album as the best album that Prong has done almost immediately, but I wanted to take a bit more time to spin the hell out of it and make the most informed decision that I could. Hey . . . I’m just trying to be responsible!
And here it is . . . Power of the Damager is the best Prong album to date. Arguments can always be made about Beg to Differ and Cleansing, but the fact is, Damager is the most complete of them all. It hits all the high points just right, and the low points . . . well, there's nothing worth mentioning. It borrows so heavily from the earlier era of the band, yet shows Tommy and company are so comfortable with the music’s direction that the whole thing just sounds fresh. The riffs are as head bobbin’ awesome as ever and the guitar tones are the heaviest since Cleansing. This should keep the hardcore Prong fans happy and should bring past fans of the band back into the fold. On top of all that, Power of the Damager is vital enough to introduce the band to a new group of fans who swore that nu-metal was true metal.
Hell, for those latter folk . . . the entire Prong catalog should be studied and revered.

The album starts of with an in-your-face beating of “Looking For Them”, and continues the pummeling through “3rd Option.” Hard driving songs that will have your neck aching the next morning and much of the day. “Pure Ether,” shows a bit of a twist with Tommy singing in his more melodic voice . . . just enough to catch your attention, then the band busts into another hard groovin’ set of riffs. The title track kicks in as a very typical Prong tune, packed with pent up aggression and killer riffs. The chorus sums up what we’ve all come to know and love about these guys. And then, we’re reminded why Prong are one of the best metal bands around. “The Banishment,” is classic industrial metal served up Prong-style. A heavy groove riff in the vein of “Beg to Differ,” or “Broken Peace,” is the strength of the tune, which acts as the centerpiece of Power of the Damager. The overall musicianship of the band on this track deserves much more praise than I could ever give. Tommy gets a bit introspective with “Spirit Guide” and “Messages Inside of Me,” but don’t think for a minute that he’s going soft on us. Far from it.

This is an album that will make people who think Disturbed or Slipknot are heavy grab themselves and soil their shorts. “Changing Ending Troubling Times,” seals the story of Damager with an intense, multi note intro, to a multi dimensional beat down. More praise for a band so absolutely drenched in what they do that it all feels so natural.

Prong have been a much overlooked band by an industry that’s in serious need of an enema. They never wavered from what their vision of metal should be. They experimented with their sound and dabbled with a more industrial feel for awhile, but bands that want to mean a damn in the future need to tweak their sound once in awhile. As long as they don’t stray so far from their original sound, they should stay vital. Tommy Victor has managed to drag Prong out of the miasma of indecision and redirected the band in the ways that made them metal legends. I chip my teeth in the mosh pit in honor of your efforts! - Pope JTE

Buy here: Power of the Damager

Posted by The Ripple Effect at 9:46 PM

Great. I'm gonna check this one out. Always been a fan.

Pretty much headbanged through the entire disc...

What more could u want from Prong?