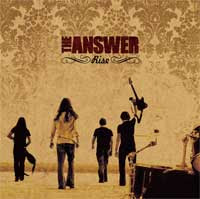 Every generation needs a new group of teenagers who find their ideal voice during their years of struggle in the wailing feedback of a guitar chord torn out of a Fender Twin. The only problem is that rock, essentially, is a rather limited pentatonic language, and finding something new to say can be difficult in the extreme. Someone once asked a guitarist in the ‘80’s why we didn’t have a lot of riff driven songs and he famously replied, “well, there are only 12 notes, and, you know, there are only so many combinations, and Jimmy Page used a lot of them.” And, no, it wasn't Nigel Tufnel.

The Answer, straight outta Northern Ireland, should be commended for not spending a great deal of time trying to over analyze how to sound “fresh” or “current” or anything that requires an annoying amount of deconstruction. In fact, the first track hits you like a bus when you've just stepped off the curb. Under the Sky is a stunning little bit of rock ‘n’ roll straight from 1975, and its riff already sounds classic. Thats a Black Beauty Les Paul ripping it up, and Cormac Neeson stole his wardrobe straight from Plant's closet circa 1970. The third track, Come follow Me, is Thin Lizzy on speed, and I mean that in the best possible way, with a Nuno Bettencourt solo hiding in the middle just to let you know just how good their chops are. Memphis Water, the 5th track, shows that their blues are as close to as Rod Stewart was when he sang You Shook Me in the Jeff Beck Group. They are simply so outrageous that you just want to let them go. Preachin’ asks the same indulgence from us: the closest these boys have come to pickin’ cotton is at the local Marks and Spencer. Its goofy and fun and they clearly love what they’re doing. Let ‘em go. As much as the hyped up Whitesnake with David Coverversion and Kingdom Clone were pretenders to the Zeppelin throne, it has been bands like the Answer and Earl Greyhound that really come close to hitting the mark.
No Questions Asked is simply a showstopper. Played at reckless Communication Breakdown pace, Ask no questions (my baby don’t care)/tell no lies (she don’t care) and you’re hearing the best wail since Robert Plant told us that a lover breakdown will drive you insane. OK, maybe the best since Chris Cornell. But damn its good. The interplay with the guitar, vocals and bass in the break builds it back up to a killer finale. I’d pay to see this one song alone live. Into the Gutter channels Sabbath in the intro, and Sometimes Your Love has a Kiss chorus so solid that you could shelve hardbacks on it in your living room.

If there is a failing, its that these Irish boys know how to rock, but they fall into the trap of believing that they need to slow down and chill out and let you go the back of the club and get a beer. Be What You Want, the 4th track, falls into Black Crowes circa Three Snakes and a Charm. The band sounds like they were told that then desperately need a lighter lifiting show closing power ballad for the single. And it shows. Always does indeed close the album, and I’m sure a lot of bars. Its not bad, but it never transcends the formula, succumbing to a keyboard build-up at the chorus that screams Winger, and so many of the other songs do that I’m just going to continue to annoy the neighbors with the other 9 tracks.

All said, Rise is simply Audacious in execution. There are moments of rock ‘n’ roll as pure here as anything from 30 years ago. Go download a few of their MP3s, go buy the album. Lets support getting these guys over to the from the !

They're Irish, not Scottish!
And they do rock.