The Verve - A Northern Soul 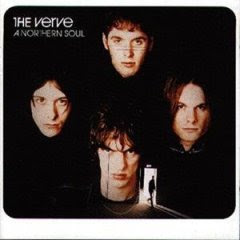 There is a moment, about 3 seconds into the second song of The Verve’s A Northern Soul, when the band launches into full flight, the top rack of lights fills the stage and the promise of a rock band is fulfilled. The power chords fill the concert hall, fill your room, fill your headphones, and the four musicians whole have become greater together than the sum of their parts.

A Northern Soul is distinct expansion upon the sound from the mid-90’s, the biggest export of which was the Stone Roses. The Verve come from a hippie shoe gazing background, acoustic guitar included, but they shoe gaze not because they’re on heroin, but because they’re slightly shy. When they plug in, the groups’ sound is massive, just the right amount of echo and delay to give all the depth and beauty to the wall of guitars.

Opening with A New Decade, yearning acoustic guitars, trippy drums, The Verve balance with the bombast of This Is Music, a devastating track that announces their intentions for the rest of the album: we’re gonna give you a little down time, but then we’re going to rock the house the rest of the way. The distorted guitar noise of A Northern Soul sounds like a mistake until the drums and bass kick in, and give a solid rhythmic foundation for the guitar to rest in.

The Verve didn’t actually have a hit until their last album with the song Bittersweet Symphony, sung over an old repeating Rolling Stones sample. (Their finest 3 minutes, the song Blue, appears in its best form on their outtakes and B-sides album, never the best career move.) Here they use some of the same motifs: repeating patterns stretched and pushed against some great drumming to build the tension on the rockers, played again and again, avoiding, deftly, almost all of the cliché’s of “trance rock”. Without a standout single, A Northern Soul falls deftly into the 1970’s tradition of playing the whole album and only putting the roach down to flip the record over. Thank God for CDs.

While slower acoustic interludes allow the Verve to wear their influences on their emo sleeves, there are moments of classic rock beauty on this little neglected gem of an album. Track it down at your nearest used CD shop