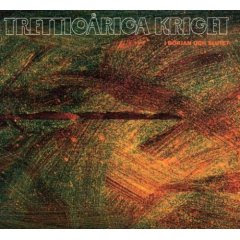 Music is a universal art form. I realized this a couple of years ago when I first stumbled on these prog-rockers from . Do me a favor, O Loyal Reader. Put aside any predisposed feelings about lyrics sung in a foreign language. In fact, open your mind and grasp what is really at the heart of why you listen to music in the first place. The melody. The groove. The soul. Baby . . . this is music and it’s beautiful!

I eagerly awaited the release of Trettioariga Kriget’s “I Borjan Och Slutet” (Thirty Year War – In the Beginning and the End), as if it were the most important album of the year. And, in some ways, maybe it was. Early in the year of 2007, I marked the release date on my calendar and referred back to that date to ensure it didn’t get by me. In so many ways, this is a disc that pulled me back from the proverbial precipice edge. It’s inspired me. I immediately went home to pick up my own guitar and play. To create with sound and emotion. Something that helped me see the bigger picture. Ya’ know?

My first impression was the crispness of the individual instruments. The drums have a serious “pop” to them. The bass is always present, but never over powering. The guitars have a voice unto themselves and guide the tunes through the various emotional shifts. The keyboards and vocals flow into the remaining nooks and crannies to complete the overall picture. Hats off to Dag Lundquist, not only for his spectacular drum work, but his production skills have been brought forth an epic piece of art!

The disc starts off with the band slowly entering the scene and gradually building up the emotion. Each instrument working together, yet speaking in its own voice, avoiding the pitfalls of dynamic shifts and time changes. With the first song being an instrumental, it’s a great way to introduce first time listeners to the band. Just as said listener is getting settled into the swing of things, TK effortlessly slide into the second track with Stefan Fredin’s droning bass tone and Christer Akerberg’s ornate guitar work layered over the groove. The disc continues in this fashion for the next hour, adding flourishes of honky-tonk guitar riffs, middle eastern influences, ebbs and flows. Robert Zima’s vocals have the perfect timing of melding tone and melody to the context of the songs. He never attempts to sing beyond his abilities. Mats Lindberg adds the right amount of texture, especially in the center section of Lovsang and it’s dramatic build up. Dag . . . well, he’s just the hero of the day. A little Pink Floyd influence with an ‘80’s pop sensibility makes this band one of the more interesting bands around.

I credit the collaboration of Fredin’s musical prowess and Olle Thornvall’s lyricism, as well as the aforementioned production work, for what is a seamless album. Though every track stands alone with it’s own feel, listening to “I Borjan Och Slutet” is best done straight through. Not that it’s traditional concept album by any means, it’s just that the songs are arranged so well and flow into one another effortlessly. It’s a complex album with dynamic shifts, so the listener is never bored, but it’s also straight forward enough that damn near anybody could enjoy it. And, to help us non-Swedish speaking folk, TK included the English translation to the lyrics, which helps us appreciate Olle’s work that much more.

This is one of those rare discs where every song is practically flawless, but I do have personal favorites that touch my soul. Barndom opens my eyes and has me looking forward with great expectations. Benke, Lovsang, Oknen, have me excited about living and deeply focused on the tasks at hand. And most importantly, the title track makes me joyous and proud of my accomplishments. After breaking this album down, one can see that it’s really a story about the various cycles of life. From the opening notes of I Krigets Tid I, we are born and entering the world of the living. By the end of the disc, we have lived our lives and are looking towards the next journey.

Posted by The Ripple Effect at 9:57 AM

Great, great band. Their debut album is one of the greats.