Down - III – Over the Under 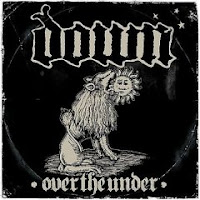 Oooph! That’s either the sound of some unsuspecting swab getting sucker punched while he’s sleeping, or it’s the sound you’ll make when you put on Down’s latest release, “Over the Under”. This album is stunning in it’s pure and unadulterated heaviness. It’s punishing in it’s passion, and it’s unapologetic. It’s frighteningly familiar, and all too real. A perfect reflection of the frustrations of not just five like minded musicians, but of an entire region of this country. It will hit you on a primal level, but it will also affect the psyche on a cerebral level. It’s as honest of an album as you’ll get.

We all should know that we’re going to get an uncompromising piece of music when Down comes to party. They’re one of those bands that plays what they want regardless of the current market trends. They’re not too concerned about offending you. They’re true to themselves so that they can be true to their fans. And, up until this point, I was never completely sold on the band. Yeah . . . the previous releases rock, and they rock well. But, there was something missing, and I’m still unsure what that “something” is.

Three Suns and One Star opens the album with the typical intensity one would expect from Down, and kind of reacquaints you with the power of the band for the next few songs. You know that sound . . . guitars tuned down to the ridiculous. Bass rumbling steadily in the background. Drums that feel like your mom’s pelting you with pots and pans. And all of that kept in neat formation by vocals that range from that of a crooning blues man, to the screams of a haunted soul. Once we get through the first four tunes the real fun begins with On March the Saints, Never Try, and Mourn. The latter has got to have the sludgiest riff ever put to disc! It’s almost as if the beginning of the album is a massive build up for the middle and end parts. The disc mellows just a hair with the Kashmir-esque Beneath the Tides and the mesmerizing His Majesty the Desert, and finally picks up the tempo one last time with Pillamyd and In the Thrall of It All. All of it is then neatly wrapped up with Nothing in Return (Walk Away), which is a grinding blues based beast of a tune.

Through the ass kicking that you’ll inevitably receive from this album, there is melody. We’re not just dealing with a metal band yelling incomprehensible lyrics for an hour. It’s the catchiest disc that Down have released and it’s also the most concise. Maybe that’s the “something” that was missing before? The band doesn’t stray far from the course by putting on throw away tracks or interludes. They start this thing heavy, and they end it heavy, showing just enough heavy metal virtuosity to keep the attention from wandering too far. All of this leads me to the boldest statement I’ll be making for the rest of this year. Okay . . . here it goes . . . deep breath . . . look the reader square in the eye . . .

This may very well be the best metal album of 2007, and I’m watching it climb the Everest that is my top albums of all time. There, I’ve put it in print even . . . “Over the Under” is one of the best metal albums of all time! It has everything you need to rock out. Good riffs? Uh huh. Singability? Yup. Dynamics? Yes sir. Attitude? Without question. Give yourself the gift that truly keeps on giving (all year long, ), and buy this album. Don’t let it pass you by and wonder ten years from now why you were never part of the movement. It’s just that good!

Buy here: Down - Over The Under

Posted by The Ripple Effect at 8:04 PM

Im glad to see some respect being given out to down Props to yah!