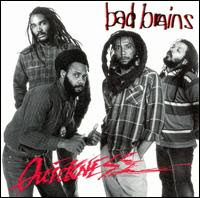 Yo, crib can be crabit/hot hot standings with the quickness/well dem callit hip hop while others cuckin’ be bop/they rushin’ go go/ I check for One drop/ma jam the disco through acid rock/mash it up with hardcore/dem rockers broke the scene.

Someone needs to check, because I’m not sure if the Bad Brains aren’t still banned in DC, but 25 years ago the Rastafarian rockers were purveyors of some of the loudest noises to be placed on record, the Rior sessions. To this day, Rior is still, literally, one of the most ferocious performances ever recorded, making the Stooges look like a lounge act, and Never Mind the Bullocks sound like Foreigner.

Energy such as that is hard to focus, and succeeding Bad Brains albums were a continued dilution of their power, their energy, their songwriting, their sheer uniqueness through various producers. The less said about those albums, with the exception of part of I Against I, the better.
Then Quickness came along to knock the knick knacks off the bookshelves again. A full 7 years after the Rior session, and long after the DC hardcore scene had either grown up, flunked out, O.D'd or moved on and gotten real jobs, Bad Brains was focused with an album full of solid songs and Rastafarian fury.

Produced by Ron St. Germain, who has the talent for being able to make records loud but crisp, not muddied or distorted (a talent that he would take the third Living Colour record), allows us to get a faceful of Dr Know's guitar, and HR's vocals in a way that prior releases only hinted at. If you’d been this close at a club show, you’d be bruised and bloodied by the second number. Quickness opens with Soul Craft, as molten guitars collude with HR's scat singing: Peaceful direction in this unity/strap on survival kit/no drugs inside of you/fly the sour craft on your own. That taste in your mouth is copper, someone’s broken your nose and you're crammed up by the mosh pit right against the PA and you're not moving anytime soon. Quickness lays down their intentions to retake the musical territory that they themselves helped bulldoze.

Describing music can be like smelling colors; you’re not quite sure if you can ever convey the flow of sound as it washes over you, much less convey accurately the punch in the gut that the best rhythm sections convey. Even a deaf man could keep time with the assault of bass and drums and guitar the rocks With The Quickness, You’ Juice and No Conditions. And when you’re convinced that the band can’t pull it back to save their, or your, lives, the settle into the experienced reggae groove on The Prophets Eye.

Time has dulled the legacy of Bad Brains, as well as diluted line ups that have toured under the name as original members have gone and come. But while the rest of the world watches The Decline of Western Civilization: The Metal Years on IFC and, rightly so, laughs their ass off, some one needs to chronicle the time in the ‘80’s when bands changed the music landscape as much as any time since the ‘60’s. Pick up Quickness and the Rior Sessions. Bulldozed indeed.

Posted by The Ripple Effect at 5:10 PM