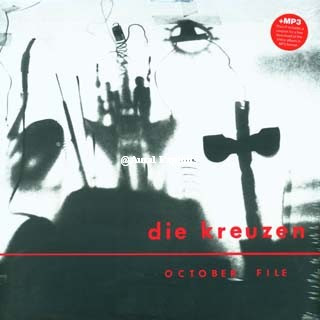 The same year that Metallica was releasing their ground breaking album Master of Puppets, there was a little ole band from Milwaukee, Wisconsin who released a disc that latched onto my heart like one of them face sucking bastards from the Alien series. The band is called Die Kreuzen, and maybe you’ve heard of them. Then again, maybe you haven’t. Back in the day, they were never one of those bands that sat at the tip of everyone’s tongue, but they were influential to a varying degree to a number of avant metal and grunge-era bands. How I stumbled on October File is beyond me. I’ve always been pretty adventurous with my musical finds, so I’m not terribly surprised that this album found its way into my life. I just don’t actually remember the act of purchasing said album like I do so many of the other essential albums in my collection. I don’t remember how I met my wife either, but that’s another story for another time.
The first thing that struck me about October File was how much the guitars reminded me of one of my all time favorite bands, Voivod. Kind of off time, unorthodox in approach, discordant, mysterious, almost like the tones were being transmitted from a far off planet in some alternate universe. I immediately gravitated to that sound and let the rest of the hardcore-ish noise of Die Kreuzen wash over me in due time. The vocals eventually wore me down like a rushing river carving away age old limestone, the bass chiseling at the lifetime of sedimentary build up, and the drums jack hammering the larger chunks of resistance into silt. I remember that at the time of my introduction to this band that I had no idea what to make of them. I just knew that they were weird in comparison to the rest of the music that was out there, ergo, Die Kreuzen were cool. The music had this aggressive sound, but not in the thundering, double bass drum detuned chugging guitar way. It was more cerebral. Not that I totally “got it,” I just knew that it was headier than the average punk music of the time. And then there was the look. Four disheveled figures emerging from a patch of overgrown weeds, hair flying every which way, clothes that looked like they were slept in, facial expressions of wonderment that they were still breathing, Die Kreuzen epitomized grunge before there ever was such a thing.
Cracking open the skull with the dissonant guitars on “Man in the Trees,” Die Kreuzen immediately sucked me in with the mesmerizing inner rhythms of the song. The guitars mix tight, staccato riffs, open sustained chords and pitched harmonics throughout both the verse and chorus of the song. The vocals explode in their high pitched screech, somewhat atonal and incoherent, but filled with a manic angst that’s compelling in its own right. Honestly, to this day, I have no idea what vocalist Dan Kubinski is ranting about, but I dig it. He conveys the emotion with that perfect mix of sentiment and rage that I can’t help but sit transfixed to my rumbling speakers as this song bursts out of them. And then there’s “It’s Been So Long,” up tempo and filled with a heavy bass groove. The guitar work of Brain Egeness is absolutely amazing and I’m tripping pretty hard that I’m just now noticing the intricacies of the work! Egeness almost sounds like he’s letting the guitar do its own thing while he simply steers the sound in the general direction of the song. The notes played aren’t always what’s expected, giving the impression that this guy has no idea how to play his instrument. But, on closer inspection, as the song unfolds and the textures of the notes interweave with one another, it becomes glaringly obvious that Egeness is an understated genius. 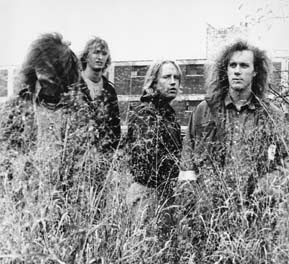 “Among the Ruins” is a blistering quasi-epic. Crisp snare drums snap the beat in time while the bass punches its precise groove, the guitars . . . need I go on about the guitars? Sheesh! While listening to this song, it’s easy to hear where the late, great Piggy of Voivod fame looked for inspiration. The spacey tones of the guitar seamlessly mix with the harder, palm muted riffs, creating a wondrous display of textural sound. The vocals, a bit more melodic, delicately dance their way through the minefield of guitar reverberation. And then there’s “Hide and Seek.” More of that rich guitar texture fills the open space between the bass and drums, unorthodox in approach, masterful in execution. Damn . . . listen to those harmonics in place of the traditional guitar solo! Such flavor!
Mixed in with the more artful-type metallic numbers, Die Kreuzen kick out the more punked out hardcore jams. “Imagine a Light” and “Conditioned” are up tempo pieces filled with manic energy. Keith Brammer’s fat bass lines fuel the piston pumping rhythms of Erik Tunison’s frantic drumming, propelling the songs with an urgency that was prevalent in the punk underground for years. Kubinski’s spazzed out, multi-layered venomous vocals work perfectly with the high octane power of the music, giving the music an edgy vitality that seems just as important today as it did in 1986. And, to keep things totally interesting, keeping their fan base guessing at what they’re gonna’ do next, Die Kreuzen break into a mid tempo acoustic guitar based tune in “Cool Breeze.” This one comes across sounding a bit like Soul Asylum or mid 90’s Goo Goo Dolls, catchy with a nice pop sensibility, accessible while staying dangerous. Gotta’ love how these guys played by their own set of rules.
Over the years, October File has become one of those albums that I reach for on those days when no other music will suffice. When I get tired of everything else that’s out there, I simply reach for it because I know that I’ll hear something that I never realized was there before. Kind of like listening to the great Thelonious Monk. It’s not something that I could listen to every day because it can get to be “too out there,” but it does recharge the musical batteries and allows me new perspective to listen to other music again. The level of diversity within the grooves of this disc makes me want to explore more of Die Kreuzen’s catalog and see what other goodies are out there that I’ve been missing. As it is, I never realized that the guitar work was so otherworldly. My God, Brian Egeness was doing things that add so many new elements to the music that I can’t help but listen to these songs over and over again. So many subtle differences within each song. So many different voices. Loved by many, Die Kreuzen’s music has influenced the sounds of a number of different bands like Sonic Youth, Voivod, and a bevy of the Seattle grunge-era bands. Does that mean you all are gonna’ love it? Odds are no. However, if you like music that’s just left of center, you like innovative guitar playing, and music that has an edge to it, October File is as good a place as any to pick up and rock out. Maybe even discover a new you! - Pope JTE

You know you're old school if you're into Die Kruezen. A great and unique band that has been forgotten by too many that should know better.

Great piece here. LOVED Die Kreuzen and had the pleasure of seeing them live many times being just north of Milw. here in Green Bay.

It is here, in Detroit, as you sit at your computer with 25 years of hindsight, that we can witness a band coming to terms with what is on offer were they to simply carbon-copy their debut and spit out Die Kreuzen II. If you’re squirming in your chair as you watch these performances, imagine how the band felt. I’m a big fan of analogies, so I’ll throw one at you – Let’s say those kings of mope-rock, Korn, were fucking about in rehearsal and stumbled upon a catchy little riff. The drummer joins in. The chubby singer begins to croon half-jokingly about his new girlfriend. Suddenly, they’re all smiling at each other because it’s good. It’s not quite “Korn”; in fact it’s stunningly beautiful. It makes “Nothing Compares To U” sound like Gorgoroth. It may be a monster hit song, were it not for the fact that Korn doesn’t play pop. In the world of Die Kreuzen, if the song came from Dan, Keith, Brian, and Erik, then it is valid. Sure, you could sweep it away for fear that the faithful will find you “soft”, but then who is being true to their muse and who is the sell out?

Die Kreuzen fucked with the formula. Brazenly. I can remember buying October File at Pravda Records in Chicago, running my fingers over the raised lettering and trying to work out just what lay within that enigmatic cover shot of….what the hell is that? Even the song titles revealed little. It opens with a “Cool Breeze”? “Among the Ruins” sounds pretty tough. “Uncontrolled Passion”? My friends had seen Die Kreuzen with Corrosion of Conformity a few months before and had been raving ever since about this incredible punk band with decidedly unpunk hair. The poster inside (these guys have posters?) confirms that they are indeed a hairy bunch. And then I put on the opening track – Jesus. I later found a local zine that actually started an October File review with the quote “Judas H. Priest!” This album presented a challenge. My friends singled out “Imagine a Light” as a favorite, seeing as that it was a fast one. But I was picking up on something else. Granted, the singer still sounded like he was vying for Linda Blair’s part in The Exorcist, but now that unmistakable howl was accompanied by something more dramatic, something that suggested grandeur, even….beauty? I couldn’t even quantify what these guys had done. It’s like The Beatles following up Meet the Beatles with Revolver. Nah. Led Zeppelin II followed by Houses of the Holy? Not quite. Perhaps Bad Brains following up Rock for Light with There’s a Riot Goin’ On. This was an odd bird. And it seemed to belong to me.

Nice piece. Unlike you I remember exactly what spurred me to buy OF--it was a glowing review in Spin that compared Kubinski's vocals to those of somebody having his dick run through a trash compactor--and I also remember instantly loving it.
The Voivod comparison is spot-on and I think so because I've said much the same thing. I think the comparison is best for Killing Technology and October File; the bands were pretty divergent before and after. Pretty sure that the liner notes to KT call out die Kreuzen. What I don't know is whether die Kreuzen were aware of Voivod.