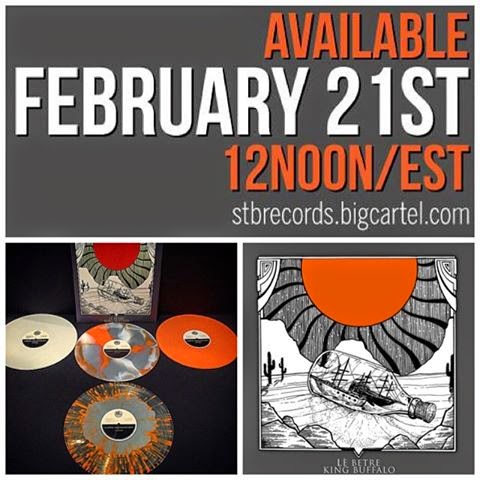 STB records is about to unleash its next release with all indications pointing to a quick sell out the same day, likely within minutes. If you're new to the label you must understand that first and foremost if you want to get your grubby hands on one of their dazzling vinyl outputs you must plan weeks in advance to be sitting at your computer ready for clicking buttons at the tick of the release clock. The last several releases have sold out completely in their limited versions within the same day, some within 5 minutes time. Not only does he craft excellent packages custom suited for Die Hards and not-so-standard Joes alike, but for the most part the music is the shining star.

I will say with confidence the music is the focal point with the next split release by like-minded bands from worlds apart geographically. Sweden's - Le Betre, and Rochester New York's - King Buffalo join forces to show the world what happens when you mix wind and fire. I will vouch for STB Steve himself and profess that he was the driving force behind the Le Betre wildfire which spread across the stoner/blues undergrowth like fire in an arid mountain windstorm late in 2013 with their debut album Melas. I remember seeing his recommendation for the band first and went straight to their Bandcamp and if memory serves right, I was the first digital purchase on their bandcamp via an actual fan account. Love at first listen and the price was around $12 US dollars at the time. That means it was fantastic in my opinion to pay that much for a digital. They have since put the disc out on vinyl and signed with STB records for good reason.

On the split Le Betre bring a solid line of progression following their previous debut, Melas. Raspy vocals drench the smokey distorted groove throughout their 5-song set. Right out of the bottle the psychedelic fuzz is in full effect on Gowns and Crowns. Intense blues based melody clouds the air as the tried and true vocalist scorches the microphone with a crackling bluster of infectious fury. As meaty as it is exquisite, the riffs ooze across the speakers like bacon grease spatters a master chefs apron while the aroma enlightens the hungry patrons senses. There is nothing on Le Betre's side of the, sure to be impeccable vinyl, record that will have you in any doubt that the band is onto something spectacular. Sounding somewhat as if Bruce Springsteen grew a bigger set of balls and smoked some weed with Willie Nelson, Le Betre capture the essence of shear rock and roll, while maintaining the stoney haze of retro blues.

In a similar way to Le Betre, King Buffalo have been on the underground radar for quite some time now after the release of their mind bending 3-song demo late in 2013 as well. I was at a loss for words upon first discovering the band as evidenced by my bandcamp blurb about the demo. It's no surprise that upon hearing of the news that King Buffalo would be paired with Le Betre, both bands I was already in love with, I felt like a fat kid on the bank of Willy Wonka's chocolate river awaiting the go ahead to dive in.

King Buffalo bring a psychedelic tone eerily similar to a favorite Canadian band of mine called Biblical. Undercut with juicy stoner riffs and reverberated vocal moans, King Buffalo combat the retro rock sensibilities of Le Betre with a more hallucinogenic approach. The intoxicating melodies are underlain by enchanting bass-lines and brooding solo runs that float effortlessly in a current of mild distortion and a spirit of mass confusion painting the picture perfect perma-smile. Running just a hair shorter on their 3-song set than Le Betre on their 5-song outing, King Buffalo's side of the 12 diameter disc is loaded with style and class. Providence closes out side B with a 10+ minute opus of psych infused jams and is clearly the highlight for King Buffalo. However, for me the split side leaves me still yearning for a full length from these guys. I feel as if this is another demo/tease being only 3 songs, which understandably is perfect for the split and concept presented. All in all the split is totally successful at hitting its marks. I just had such high, perhaps unrealistic, expectations for King Buffalo, and they were a bit eclipsed by the prowess of Le Betre this go around.

No matter who the "winner" is on this split, what better way to follow up the goliath of a split that was Goya / Wounded Giant, review here, than with another stellar pairing on the opposite end of the war path. Balancing the uber heavy doom riffs from one release to the elegantly evocative vibe on this split, STB is hitting a new stride of perfection. Whereas I gave the Goya / Wounded Giant a 50/50 split, I score this one a 70/30 in favor of Le Betre. I highly recommend you spend the money and take a stab at owning one of these this Saturday February 21st, 2015. Congrats to Steve STB on this masterful pairing. Indicative of a good set of ears and the vinyl release is no doubt first class and compulsively crafted as it is consumed. Until next time!